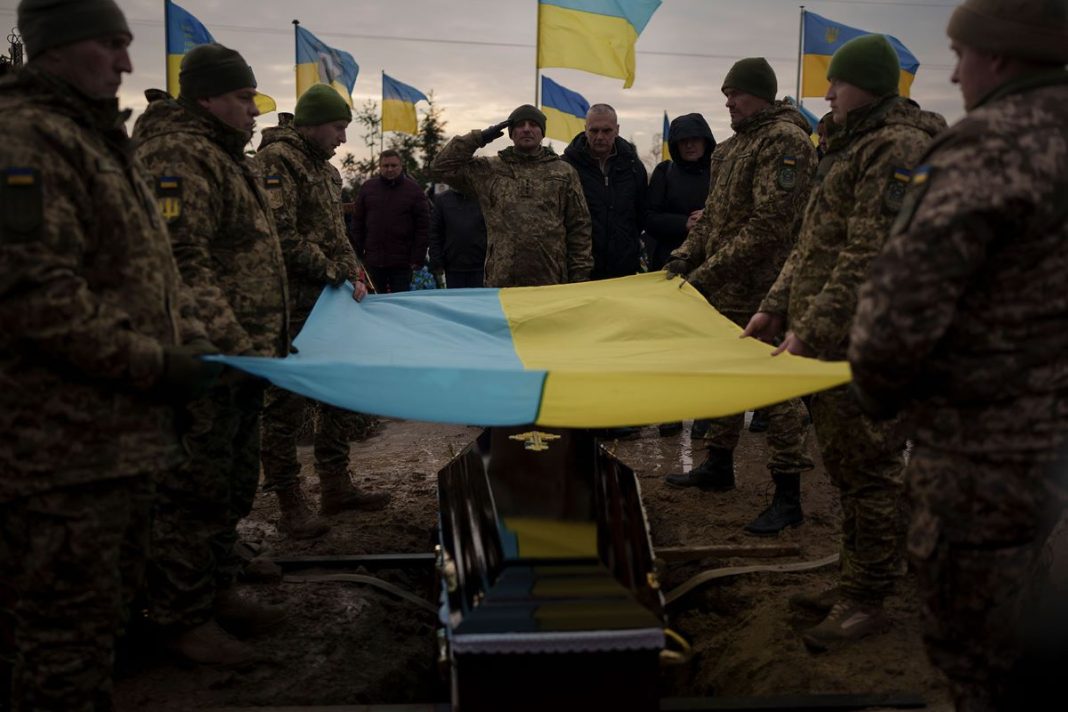 Pope condemns use of ‘food as a weapon’ of war

Pope Francis has urged an end to the use of “food as a weapon” of war, noting the Ukraine conflict had put “entire peoples at risk of famine”.

“We know that every war causes hunger and exploits food as a weapon … [let us], starting with those who hold political responsibilities, commit ourselves to making food solely an instrument of peace,” he stated in his annual Christmas message.

According to Novak, Russia will produce such volumes of oil even under the new EU oil embargo imposed on December 5, and after a similar measure on oil products starts working on February 5.

“I do not rule out that in 2023 there will be downside risks to production in certain periods. It is possible that maximum reduction will reach 7-8 percent. However, for the year as a whole, we will produce at least 490-500 million tonnes. But again, a lot will depend on logistics,” Novak added.

The death toll from Russian attacks on the southern Ukrainian city of Kherson has risen to 16, with a further 64 injured, the Ukrainian military governor of the region reported on Sunday.

Among the dead were three men who died while clearing mines, Yaroslav Yanushevych reported on Telegram.

Russia will destroy the Patriot air defense systems if the US provides them to Ukraine, Russian President Vladimir Putin said on Rossiya-1 television on Sunday.

“Of course, we’ll take them out, 100%!” he stated in interview with journalist Pavel Zarubin on the Moscow. Kremlin. Putin program.

The president added Ukraine so far doesn’t have these systems.

Putin told reporters on Thursday that “the Patriot is a fairly outdated system” and an “antidote” to these systems will be found.

Ukrainian President Volodymyr Zelensky has recently traveled to Washington at the invitation of US President Joe Biden. During his visit, the US announced a new assistance package worth $1.85 bln. It for the first time included the Patriot air defense system that has a launcher on a truck chassis, a radar and a control station.

Russia is open to a dialogue with all stakeholders on peaceful conflict settlement in Ukraine, but they have so far refused to negotiate, Russian President Vladimir Putin said on Sunday.

“The policies of our geopolitical opponents, aimed at splitting up Russia, are at the roots of Ukrainian conflict’, the Russian president stated.

Putin also added that Russia is ready to negotiations with all stakeholder in geopolitical crisis.
“We are ready to negotiate with all participants to this process [the conflict in Ukraine] on some acceptable resolutions, but it is their business. It is them and not us who refuse to negotiate,” Putin continued.
The Russian leader also noted that the nation is doing the right thing in Ukraine.

Russia will look for new markets and logistics even at higher costs so as not to supply oil at prices set by the West, Finance Minister Anton Siluanov said on Sunday.

“We will not supply oil by contracts, which will indicate price limits offered by Western countries. This is out of the question. Russian President Vladimir Putin stated that Russia will not supply oil under agreements that specify price caps,” Siluanov stated.

The minister also added that Russia will look for new consumers as the demand for oil is expected to increase.

Relations between China and Russia strong as monolith: FM

Sino-Russian relations are strong as a monolith and do not change under the influence of the unstable international situation, Foreign Minister of China Wang Yi said on Sunday at a symposium dedicated to the Chinese diplomacy.

“Relations maintained between China and Russia are firm as a monolith. They are not susceptible to interference and provocations; major changes in the state of affairs do not hurt them,” the minister stated.

Cooperation between Beijing and Moscow is not antagonistic and is not aimed against any third party, Wang Yi noted.

“China and Russia firmly speak out against hegemony and against a new cold war,” he added.

Both countries are proactively promoting bilateral cooperation, addressing mutual strategic interests and resting on mutual confidence, the Minister noted. The trade turnover between China and Russia is moving to the level of $200 bln per year, he said. Settlements in national currencies in the mutual trade between China and Russia are expanding, he noted, having highlighted significance of large-scale bilateral projects implemented by joint efforts.

Air raid sirens have gone off in Kyiv and across all Ukrainian regions, officials say.

Unconfirmed Ukrainian social media reports said the alert may have been declared after Russian jets took to the skies in Belarus.

Ukrainian presidential adviser Mykhailo Podolyak has hit out at those calling for Kyiv to seek peace talks with Russia, referencing Moscow’s relentless pounding of the country’s power grid since October.

“Russia wants to kill with impunity. Shall we allow it?” he asked.

Ukraine’s Defence Minister Oleksii Reznikov has said the attack in Kherson was evidence that Kyiv should be sent more artillery to defend itself from Russian attacks.

President Volodymyr Zelensky conducted a trip to Washington, DC, earlier this week in which he secured a $1.8bn military aid package, including a Patriot missile battery and precision-guided bombs for Ukrainian fighter jets.

A Russian attack on the city of Kherson has killed at least 10 people, Ukrainian authorities have confirmed.

Ukraine will be able to prevent such tragedies if it has more means of counter-battery warfare, more artillery and more long-range ammunition.
Thus, russian murderers will be punished and driven out from Ukraine.
2/2 https://t.co/sYEUf4imT5

Kuleba thanks Blinken for ‘tireless work’ mobilising support for Ukraine

Ukrainian Foreign Minister Dmytro Kuleba has thanked US Secretary of State Antony Blinken for his “tireless work” in support of Ukraine.

Kuleba’s tweet followed a speech in which the US official renewed Washington’s commitment to stand with Kyiv as it battles the ongoing Russian invasion.

Thank you @SecBlinken for these kind words and your tireless work to mobilize support for Ukraine this year. It was an honor to have you as a special guest of Ukrainian Ambassadors Conference 2022. Merry Christmas to your family and all Americans. https://t.co/Cvnm17xMK9

The Russian-installed governor in Kherson has accused Kyiv of being behind the shelling that killed at least 10 people earlier on Saturday.

“This is a disgusting provocation with the obvious aim of blaming the Russian armed forces,” Volodymyr Saldo wrote on Telegram.

Russia controls most but not all of the Kherson region. The city of Kherson was recaptured by Ukrainian forces in November in a major blow to the Russian military.

Ukraine will create its own Christmas miracle: Zelensky

Ukrainian President Volodymyr Zelensky has said Ukrainians will create their own miracle this Christmas by remaining unbowed despite Russian attacks targeting key infrastructure.

“Even in complete darkness, we will find each other to hug each other tightly. And if there is no heat, we will embrace each other for a long time to warm one another,” Zelensky stated.

“We will smile and be happy, as always. There is one difference – we will not wait for a miracle, since we are creating it ourselves,” he added.

Zelensky made his remarks in a video address to Ukrainians who celebrate Christmas in December. Most Ukrainians are Orthodox Christians and mark the occasion in early January.

The director of Ukraine’s military intelligence agency, Kyrylo Budanov, has told the New York Times that Russia is staging a “disinformation campaign” to persuade Kyiv to relocate part of its troops away from the combat zone in the southeast.

Russia sent conscripts to its military bases in allied Belarus and moved troops by rail, raising concerns that it might attempt a second siege of the capital from the north.

While the threat of such an event cannot be ruled out, Budanov said Russia was trying to convince Ukraine of this possibility in order to gain ground in the southeast.

In Bakhmut, in the Donetsk region, Wagner mercenaries were deployed to deliver a breakthrough after months-long battles.

“Wagner units … need to show they are a force, and they can do what the Russian army could not,” Budanov noted.

Turkey has said that Russia’s war on Ukraine “will not end easily”, despite repeated attempts to arrange peace talks between Kyiv and Moscow.

“It would not be wrong to say that despite all our goodwill and call for a ceasefire, this war is likely to continue into 2023,” Defence Minister Hulusi Akar told journalists during a year-end briefing in the capital, Ankara.

Turkey, which helped broker a deal with the United Nations for the export of Ukrainian grain through the Black Sea, is seeking to bring together Russian and Ukrainian leaders for negotiations to end the war.

“As Turkey, we call for a ceasefire – at least a humanitarian ceasefire. Then, a permanent ceasefire and peace talks,” Akar added.

Russia might be preparing to attack Ukraine from Belarus: ISW

Russia might be preparing to renew its offensive on the Ukrainian capital Kyiv by launching a potential new invasion from north, the Washington-based Institute for the Study of War (ISW) has announced.

“Verified evidence of a Russian buildup in Belarus makes more sense as part of preparations for a renewed offensive than as part of ongoing exercises and training practices, but there remains no evidence that Moscow is actively preparing a strike force in Belarus,” the think-tank said in its latest report.

While the institute said a renewed large-scale Russian invasion was unlikely this winter, the possibility of a new operation being launched from the Kremlin ally’s territory was “a possibility that must be taken seriously”.