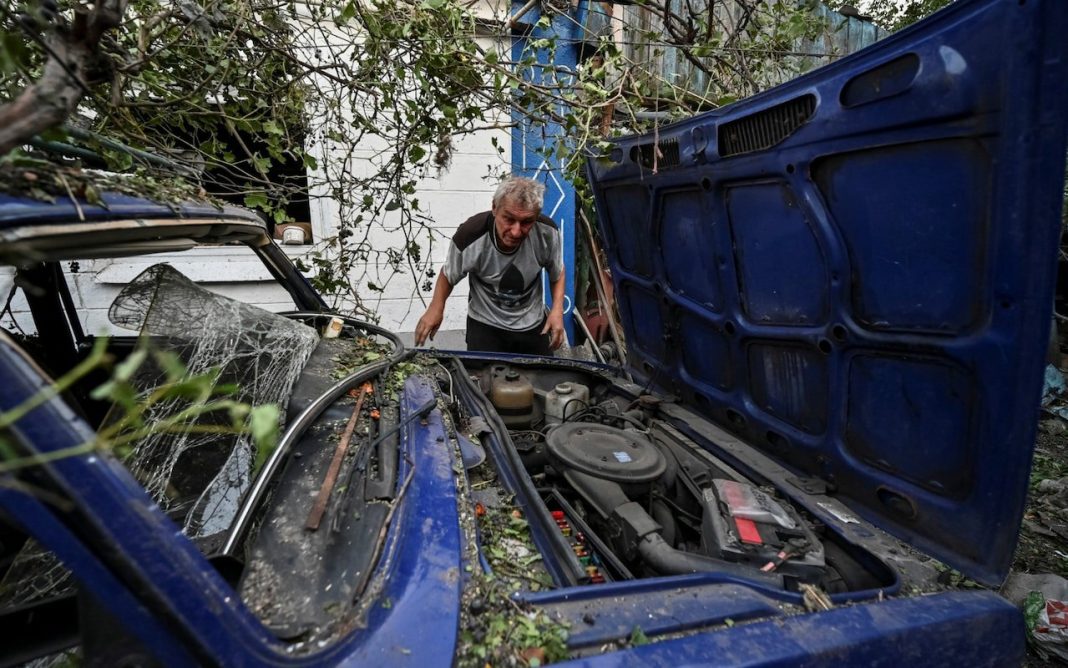 Ukraine: Russia fires on cities not far from nuclear plant

Russian forces fired missiles and artillery on Ukrainian-held areas across the river from Europe’s largest nuclear power plant, authorities said, as concern persisted about safety at the Russian-controlled plant after it was temporarily knocked offline.

Grad missiles and artillery shells hit the cities of Nikopol and Marhanets, each about 10km (6 miles) and across the Dnieper River from the Zaporizhzhia nuclear power plant, stated Valentyn Reznichenko, governor of Ukraine’s Dnipropetrovsk region.

Russian forces occupied the nuclear plant complex early in the war in Ukraine, and Ukrainian workers have kept it running. Each side has repeatedly accused the other of shelling the complex, raising fears that the fighting could trigger a catastrophe.

There is a risk of a radioactive leak at Ukraine’s Zaporizhzhia nuclear power plant – Europe’s largest – which is occupied by Russian troops, Ukraine’s state energy operator has announced.

Energoatom said Moscow’s troops had “repeatedly shelled” the site of the plant in southern Ukraine over the past day, while Russia’s defence ministry claimed Kyiv’s troops were responsible.

“As a result of periodic shelling, the infrastructure of the station has been damaged, there are risks of hydrogen leakage and sputtering of radioactive substances, and the fire hazard is high,” Energoatom said on Telegram.

The agency noted that as of midday Saturday (09:00 GMT) the plant “operates with the risk of violating radiation and fire safety standards”.

There was no immediate response from Kyiv to the allegation.

Russia and Ukraine have traded blame for shelling near the plant, which on Thursday sparked fires in the ash pits of a nearby coal power station that disconnected the plant from the power grid.

In July, Turkey, the UN, Russia and Ukraine signed an agreement in Istanbul to resume grain exports from three Ukrainian Black Sea ports which were halted due to the Russia-Ukraine war, now in its seventh month.

Russia has probably stepped up attacks along the Donetsk sector of the Donbas region over the last five days in a move that could be aimed at sucking in Ukrainian troops and foiling a counter-attack, according to Britain’s defence ministry.

There has been intense fighting near the towns of Siversk and Bakhmut which are located north of the Russian-occupied city of Donetsk, the ministry said on its daily intelligence bulletin on Twitter.

“There is a realistic possibility that Russia has increased its efforts in the Donbas in an attempt to draw in or fix additional Ukrainian units, amid speculation that Ukraine is planning a major counter-offensive,” the update added.

In an interview with French TV network LCI, Medvedev also stated it is not possible for Moscow to stop its military campaign in Ukraine even if Kiev formally renounces its aspirations to join NATO.

Russia, he noted, will continue their military operations until its goals are achieved.

The ongoing military operations in Ukraine are the “most modest option” available to Moscow, Medvedev continued, adding Russian troops only target the Ukrainian military.

Ukraine’s “infrastructure would have been completely destroyed, its decision-making centers, its state authorities, and so on. We didn’t go that route,” Medvedev was quoted as saying.

“Renouncing its participation in the North Atlantic alliance is now vital, but it is already insufficient in order to establish peace,” he added.

Ever since February, when Russia launched its full-scale military operation in Ukraine, the two countries have held several rounds of talks to settle the war, but have not shown any output.

“This will depend on how events unfold. We were ready before to meet (Zelensky),” Medvedev stressed.

Russia has blocked agreement on the final document of a four-week review of the UN treaty considered the cornerstone of nuclear disarmament, which criticised its military takeover of Europe’s largest nuclear plant soon after Russian troops invaded Ukraine.

Igor Vishnevetsky, deputy director of the Russian Foreign Ministry’s Non-Proliferation and Arms Control Department, told the delayed final meeting of the conference reviewing the 50-year-old Nuclear Nonproliferation Treaty (NPT) that unfortunately there is no consensus on this document.

He insisted that many countries – not just Russia – didn’t agree with “a whole host of issues” in the 36-page last draft.

The NPT, which 191 signatories review every five years, aims to prevent the spread of nuclear weapons, promote complete disarmament and promote cooperation in the peaceful use of nuclear energy.

Ukraine has now exported one million tonnes of agricultural products from its Black Sea ports under the terms of a grain deal brokered by Turkey and the United Nations, President Volodymyr Zelensky said.

In an evening address, Zelenskyy stated 44 ships had been sent to 15 nations.

A further 70 applications for ships to be loaded had been received, he added, reiterating that Kyiv’s goal was to export three million tonnes a month.

A US citizen has recently died in Ukraine, a Department of State spokesperson has said, adding that officials are in touch with the family and are providing consular assistance.

“We also once again reiterate US citizens should not travel to Ukraine due to the active armed conflict and the singling out of US citizens in Ukraine by Russian government security officials, and that US citizens in Ukraine should depart immediately if it is safe to do so using any commercial or other privately available ground transportation options,” the spokesperson noted.

The situation at the Russian-occupied Zaporizhzhia nuclear plant in Ukraine remains very risky and dangerous even though the facility’s two working nuclear reactors have been reconnected, President Volodymyr Zelensky has stated.

In an evening address, he reiterated demands that the International Atomic Energy Agency be allowed to visit the plant as soon as possible.

Ukraine’s state nuclear company Energoatom has announced a second reactor at the Russian-held Zaporizhzhia Nuclear Power Plant has been reconnected to the Ukrainian grid.

The first reactor was reconnected on Friday.

Ukraine says it took out important bridge in occupied south

Ukrainian rocket fire has hit an important bridge used by Russian occupying forces in the southern Kherson region and put it out of action, Ukraine’s southern military command said.

“Rocket artillery units continued to conduct missions, including ensuring control over the Daryivskiy bridge. Its operation is currently halted,” the southern command added in a statement.

There was no immediate comment from Moscow. The Daryivskiy bridge, which spans nearly 100 metres, is the only Russian-controlled crossing across the Inhulets River, a tributary of the vast Dnieper.

The United States has had constructive talks with Indian officials on a proposal to cap prices of Russian oil, US Deputy Secretary of the Treasury Wally Adeyemo has noted, as it seeks global support for a proposal to cut Russian revenue.

India and China have stepped up oil purchases from Russia after the Ukraine invasion at a discount to the market price, at a time Western sanctions have pushed global inflation to the highest levels in years and hurt revenues of European and American companies linked to Russia’s oil trade.

“I had a very constructive conversation with my Indian counterparts about the price cap proposal, but also talked extensively with private sector participants in India as well,” Adeyemo told reporters in New Delhi.

Russia’s capabilities in the north are a strategic challenge for NATO and the alliance needs a strong allied presence in the Arctic region, NATO Secretary-General Jens Stoltenberg has said during his Canada visit.

“The importance of the high north is increasing for NATO and for Canada because we see a significant Russian military buildup with new bases, new weapons system,” Stoltenberg continued, standing alongside Canadian Prime Minister Justin Trudeau in Cold Lake, Alberta.

“The geopolitical situation has shifted over the past months, which is why understanding that Russia is an increasing concern to all of us, makes it timely for us to share with the secretary-general and with NATO all the things that Canada is doing through NORAD,” Trudeau noted, referring to United States-Canadian North American defence organisation.

UN appeals for safe passage of aid to Ukraine

A top United Nations aid official has issued an urgent appeal for guarantees from Russia to allow safe passage of humanitarian aid to Ukraine before winter.

Speaking from Kharkiv in northeast Ukraine, where shelling has intensified in the last week, Denise Brown, humanitarian coordinator in Ukraine from the United Nations Office for the Coordination of Humanitarian Affairs (OCHA) said they needed security assurances in order to help people.

“That’s all we want to do,” Brown said, adding, “Provide insulin to the hospitals, provide blankets, provide mattresses, fuel – if we can, repair windows and doors. It’s not complicated.”

The chairman of Dnipropetrovsk regional council has said that Russia’s attack on the Chaplyne train station in Ukraine that killed 25 people was a “targeted terrorist attack” against civilians and civilian infrastructure.

Mykola Lukashuk said during a briefing that the Ukrainian General Prosecutor’s Office and the military came to the conclusion because it was “a combined attack” carried out using S-300 missiles and the 9K720 Iskander complex.

The deadly attack on Wednesday came as Ukrainians were defiantly celebrating their Independence Day while remaining on high alert because of threats that Russia would use the occasion to mount attacks.

“The deliberate use of 9K720 Iskander and S-300 missiles shows that the enemy understood that civilians were there and that there was no military personnel,” he added.

“Finland and Sweden have renewed their commitment to demonstrate full solidarity and cooperation with Turkey in the fight against all forms and manifestations of terror,” Ibrahim Kalin’s office said in a statement following the discussions in Finland.

Finland and Sweden applied for membership in the transatlantic military alliance in response to Russia’s invasion of Ukraine, but were initially met with opposition from Turkey, which accused the Nordic countries of supporting groups it deems to be “terrorists”.

The three countries signed an accord at the NATO summit in Madrid in June to lift Ankara’s veto in exchange for pledges on counterterrorism and arms exports.

European Union energy ministers will convene for an urgent meeting as soon as possible to discuss the energy crisis sparked by Russia’s invasion of Ukraine, Czech Prime Minister Petr Fiala has said.

Approved by European Commission chief Ursula von der Leyen, the move comes as the 27-nation bloc is trying to shed dependence on supplies of Russian oil and gas.

The Czech Republic currently holds the rotating presidency of the EU, and it has already scheduled a regular meeting of the energy ministers for October.

Jozef Sikela, the country’s industry minister, warned separately on Friday that the bloc was in “an energy war with Russia” which he stated was “damaging the whole European Union”.