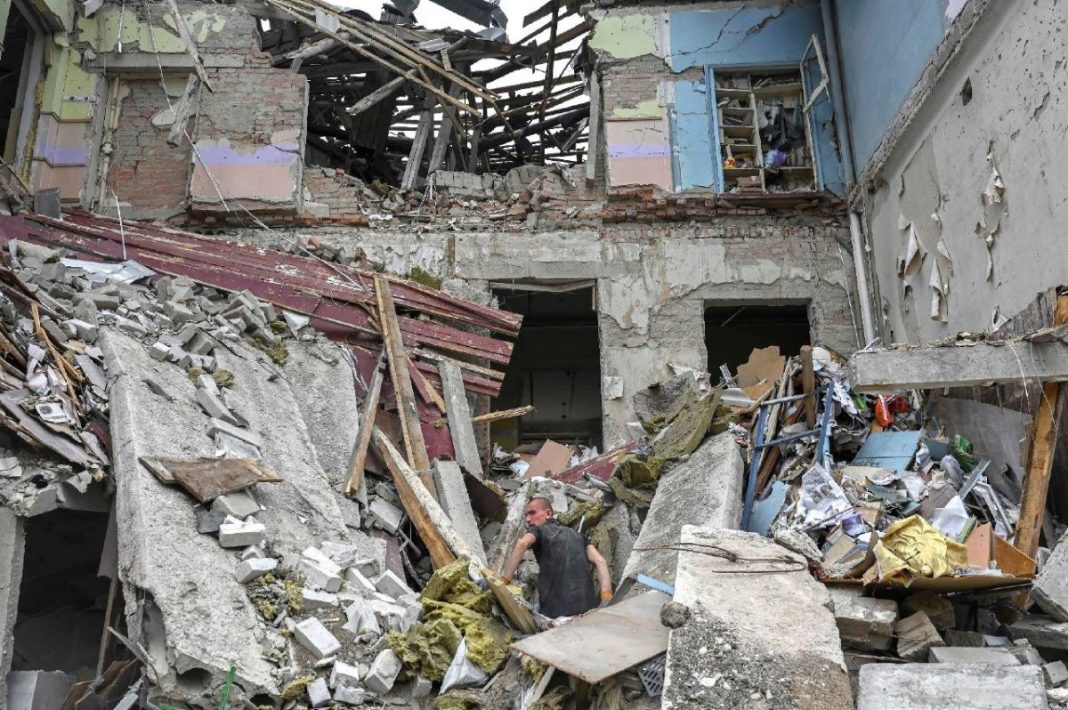 Russian and pro-Russian forces had reported that they had taken full control of Pisky more than a week ago.

The ministry also announced Russian forces had destroyed a US-supplied HIMARS rocket system near Ukraine’s Kramatorsk and a depot with ammunition for the system, Interfax reported.

Ukrainian presidential adviser Mykhailo Podolyak says for the war to end, his country would seek the return of Crimea as well as the punishment of Russian leaders who began the war.

“Obviously, it must end with Crimea liberation and legal punishment of ‘special military operation’ initiators,” he added.

Ukraine’s health minister has accused Russian authorities of committing a crime against humanity by blocking access to affordable medicines in areas its forces have occupied since the war began last February.

“Throughout the entire six months of war, Russia has not [allowed] proper humanitarian corridors so we could provide our own medicines to the patients that need them,” Liashko stated.

“We believe that these actions are being taken with intent by Russia, and we consider them to be crimes against humanity and war crimes that will be documented and will be recognised,” the minister added.

The World Health Organization (WHO) announced it recorded 445 attacks on hospitals and other health care facilities as of August 11 that directly resulted in 86 deaths and 105 injuries.

The Ukrainian government has a programme that provides medications to people with cancer and chronic health conditions. The destruction of hospitals and infrastructure along with the displacement of an estimated seven million people inside the country have also interfered with other forms of treatment, according to UN and Ukrainian officials.

Moscow warns of end to Russia-US relations if assets seized

“We warn the Americans of the detrimental consequences of such actions that will permanently damage bilateral relations, which is neither in their nor in our interests,” Alexander Darchiev, the head of the North American Department at the Russian foreign ministry, told TASS.

It was not immediately clear which assets he was referring to.

Darchiev also added the US influence on Ukraine had increased to the degree that “Americans are increasingly becoming more and more a direct party in the conflict”.

The other ship, Marshal Islands-flagged THOE, sailed from the Chornomorsk port with 3,000 tonnes of sunflower seed, for Tekirdag, northwestern Turkey.

On July 22, Turkey, the UN, Russia, and Ukraine signed a deal in Istanbul to reopen three Ukrainian Black Sea ports for exporting Ukrainian grain stuck due to the Russia-Ukraine war, which is now in its sixth month.

Two bridges to Russian-occupied territory in Kherson out of use: UK

The two primary road bridges giving access to the pocket of Russian-occupied territory on the west bank of the Dnieper in Kherson Oblast are now probably out of use for the purposes of substantial military resupply, the British military intelligence has announced.

Even if Russia manages to make significant repairs to the bridges, they will remain a key vulnerability, the UK’s Ministry of Defence said.

“Ground resupply for the several thousand Russian troops on the west bank is almost certainly reliant on just two pontoon ferry crossing points,” the ministry added in an intelligence update.

With their supply chain constrained, the size of any stockpiles Russia has managed to establish on the west bank is likely to be a key factor in the forces’ endurance, according to the update.

Almost one-third of Ukraine needs to be cleared of ordnance

Some 27 percent of Ukraine’s territory will need to be cleared of mines and explosives, according to the latest estimates by the ecology ministry nearly six months since Russia began its invasion and bombardment of its neighbour.

So far Ukrainian authorities have cleared more than 620sq kilometres (240sq miles) of land that were littered with thousands of explosive devices, including 2,000 bombs dropped from the air.

Nearly 300,000sq km (116,000sq miles) are still seen as “contaminated”, according to data released by Ukraine’s Emergency Services. Making that area safe could take a decade, the government announced.

Ukraine’s military said its artillery hit a Russian ammunition depot near a key bridge in the south on Friday and added it now had the ability to attack nearly all of Moscow’s supply lines in the occupied region.

The military announced the attack killed 11 Russian soldiers in the depot in the village of Vesele, about 80 miles (130km) down the vast Dnieper River from the Russian-occupied Zaporizhzhia nuclear power plant.

Natalia Humeniuk, spokesperson for Ukraine’s southern military command, said Ukraine has nearly all of Russia’s southern supply routes under “fire control,” meaning that Ukraine is able to hit them with ranged weapons at will.

“Our forces are controlling the situation in the south, despite the enemy trying to bring in reserves even though almost all their transport and logistical arteries have been hit or are under our fire control,” she added in a national broadcast.

Russia’s gross domestic product (GDP) contracted by 4 percent in the second quarter compared with the same period a year earlier, as economic sanctions by the West take their toll on the economy, the national statistics agency has reported.

In the period from April to June, GDP “amounted to 96 percent of the level attained in the same period of 2021, preliminary estimates show”, Rosstat said in a statement, publishing the first full quarterly data since Moscow launched its military offensive in Ukraine in late February.

India: No pressure on it to limit energy purchases from Russia

India has said there was no pressure on it from Western countries or anywhere else over its energy purchases from Russia.

India, the world’s third-biggest crude importer, overtook China to become the biggest buyer of Russian oil in July based on seaborne volumes, having bought very little from the country before the start of the war in Ukraine in February.