President Rouhani Hits Back at Trump for ‘Ignorant’ Anti-Iran Remarks 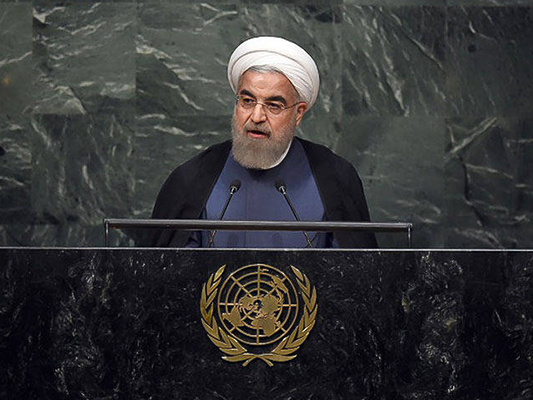 Iranian President Hassan Rouhani has lashed out at US President Donald Trump for his “ignorant and spiteful” comments against the Iranian nation.

Delivering a speech at the 72nd UN General Assembly session in New York on Wednesday, President Rouhani said the “ignorant, ugly, spiteful literature of the US president, which was full of false information and groundless allegations, against the Iranian nation” were beneath the dignity of the United Nations.

During his speech at the UN General Assembly on Tuesday, Trump accused Iran of engaging in “destabilizing activities” in the region.

He also claimed that Iran’s “support for terror is in stark contrast to the recent commitments of many of its neighbors to fight terrorism and halt its financing.”

Trump also denounced the 2015 nuclear agreement between Iran and the P5+1 group of countries, including the US, as “an embarrassment” that Washington may abandon.

He said the Iran deal was “one of the worst and most one-sided transactions the United States has ever entered into.”

In response, Rouhani said that the Iranian nuclear deal, known as the Joint Comprehensive Plan of Action (JCPOA), was an international agreement backed by UN Security Council Resolution 2231.

“The JCPOA does not belong to one or two countries. The JCPOA is a UNSC document, which belongs to the entire international community,” Rouhani said.

Rouhani also responded to the US threat to scrap the deal, saying Iran would respond to any breach of the JCPOA.

“The Islamic Republic of Iran will not be the first country to violate the JCPOA, but will firmly and appropriately respond to any breach,” he said.

He also warned about bids by “incompetent policymakers” to dismantle the JCPOA, but stressed that such attempts would fail to stop Iran from treading the path of progress.

“By reneging on its promises and violating international obligations, the new US administration will only discredit itself globally and lose the trust of governments and nations in any future negotiations and commitments,” said the Iranian chief executive.

Elsewhere in his speech, Rouhani talked about Iran’s defense power, including its missile program, reassuring the global community that Iran’s military might would be only deterrent and aimed at restoring regional peace and stability.

The Iranian president also lashed out at Israel, saying it was not acceptable that the Zionist regime of Israel, which is not committee to international law and whose nuclear weapons pose a threat to the region and the entire world, advises peace-loving nations.

Rouhani said Iran was in the forefront of the fight against extremism and terrorism, stressing the Islamic Republic sought a secure region and welcomed cooperation with other countries to that end.

Heading a high-ranking delegation, the Iranian president arrived in New York on Sunday night to participate in the 72nd session of the United Nations General Assembly and hold talks with senior officials of some other countries attending the meeting.

Rouhani has met and held talks with several leaders and heads of state on the sidelines of the UN General Assembly meeting.