Rouhani: Nation Determined To Achieve Goals of the Islamic Revolution 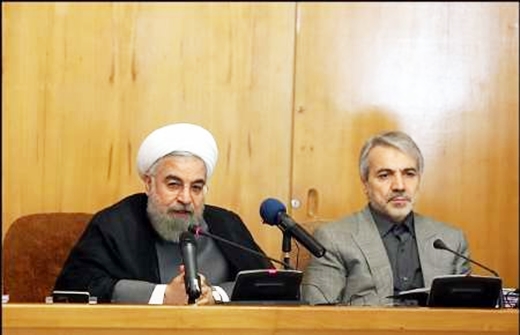 President Hassan Rouhani said on Wednesday June 1 that the nation is determined to achieve the sublime goals of the 1979 Islamic Revolution.

Preserving unity, coherence, coordination, the spirit of sacrifice and moderation are all needed to achieve the late Imam Khomeini’s aspirations, Rouhani said at the cabinet session.

“Today, the implementation of Resistance Economy policies, creating economic growth and job opportunities, and improving public living conditions are among the important goals of the Islamic Revolution,” said the President.

Referring to the 27th anniversary of the demise of the late founder of the Islamic Republic and father of the Islamic Revolution Imam Khomeini, which is remembered on June 3, Rouhani said the late Imam taught the lesson of resistance in line with independence.

He further hoped that the Iranian people, as well as the country’s officials, will continue moving towards the Imam’s path, with the help of the guidelines of the Supreme Leader of the Islamic Revolution Ayatollah Seyyed Ali Khamenei.