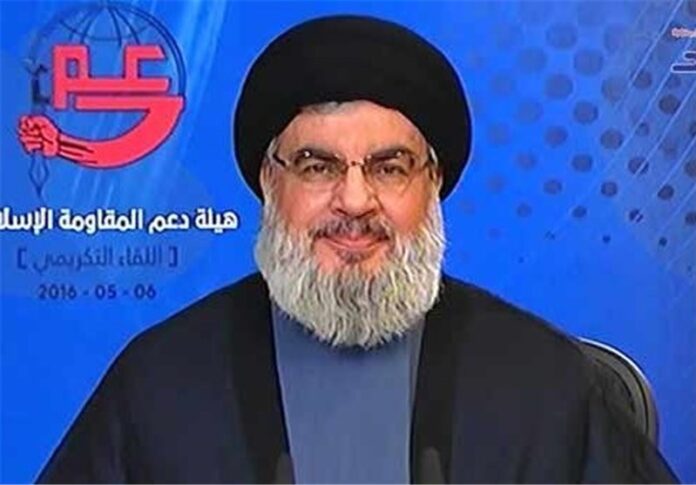 Secretary-General of the Lebanese Hezbollah Resistance Movement Seyed Hassan Nasrallah said the Saudi regime is intensifying clashes in Syria and Yemen in a bid to scuttle any peaceful efforts aimed at putting an end to the crises in the two Arab countries.

Nasrallah said Saudi Arabia, a main backer of the Takfiri militants, is escalating conflicts in Syria and Yemen in order to thwart any peace efforts.

He made the comments during a televised speech in the Lebanese capital, Beirut, on Friday.

Nasrallah further criticized Saudi Arabia for labeling Hezbollah as a terrorist organization, saying such a move aims to tarnish its reputation and please the US.

He said the Saudi regime failed to convince fellow Muslim states to join its stance against Hezbollah, adding that the Organization of Islamic Cooperation (OIC) did not recently reach consensus in its final statement against the resistance movement.

Nasrallah also thanked Indonesia, Iraq, Tunisia and Algeria and other supporters of the resistance while hailing Iran’s unwavering support.

He also said that Syria is engulfed in a war because of its support for resistance movements in Palestine and Lebanon, adding the US and Israel target Hezbollah and its backers, Press TV reported.

The secretary general of the Lebanese resistance vowed that resistance movements would come out stronger from attacks and assassinations.

The Saudi kingdom has been targeting Hezbollah, which has been fighting Saudi-backed extremism inside both Lebanon and Syria.

Earlier this year, Lebanese Foreign Minister Gibran Bassil refused to back a motion drafted by Saudi Arabia against the Islamic Republic, prompting Riyadh to retract a $4-billion aid pledge to Lebanon and demand an apology, which Lebanon refused to give.

Some local media reports in Lebanon have, meanwhile, said the Saudis may be applying pressure to secure the release of a member of the royal family held in Lebanon since last October on drug charges.

Abdul-Mohsen al-Waleed Al Saud was detained in Beirut after authorities seized two tons of amphetamine pills before they were loaded onto his private plane.