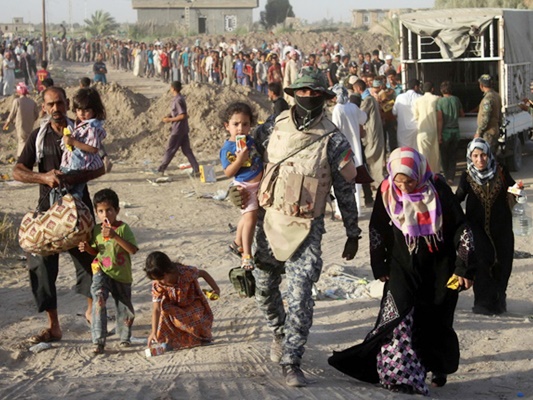 Iraqi military commanders announced the recapture of Fallujah in a letter to Heidar Al Ebadi, the Iraqi Prime minister, Fararu Reported. Following the liberation of Al Nezal at the centre of Fallujah, Iraqi forces managed to win back the area of el Arsan and triumphantly hoisted their flag over the city’s government building.

Mohammed Al-Ghabban, Iraq’s Interior Minister, arrived in Fallujah to get the latest news about the status of the area.

After the declaration of victory over ISIL in Fallujah, Iraq’s Prime Minister said, Iraqi forces are gearing up to retake Mosul as their next target. Heidar al Abadi underscored that Iraqi military forces have control over the entire city of Fallujah. “Iraqi military and allied volunteer fighters lived up to their promises and liberated Fallujah,” Iraq’s Prime Minister stated, while pointing out that this was a victory for all Iraqis.

The following pictures show the residents and civilians of Fallujah, Al Anbar, returning home after Iraqi forces pushed ISIS terrorists out of the city.