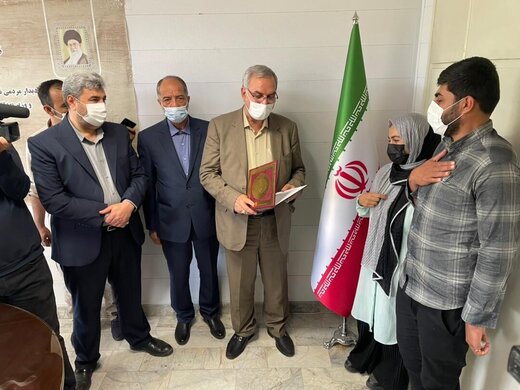 Iranian President Ebrahim Raisi has offered a parcel of land to the parents of newly born quadruplets in the city of Salmas, West Azarbaijan Province, as part of the government plans to encourage population growth.

Iranian Health Minister Bahram Einollahi visited the quadruplets’ parents as Raisi’s representative and congratulated them on the birth of the four babies.

On behalf of the president, he offered a parcel of land to the family in Salmas and said the administration had drawn up plans to support all the parents with four children and above.

Einollahi said the Ministry of Roads and Urban Development had been tasked with identifying all the families who have more than four children to provide them with similar support in line with the government’s policy of accelerating population growth.

In a written message to a meeting of the National Headquarters for Population on Wednesday, Leader of the Islamic Revolution Ayatollah Seyyed Ali Khamenei said increasing the birth rate in Iran was “vital” to the country’s future.

He said efforts to boost birth rate and to decrease the age of the human resources of Iran were “one of the most crucial obligations” of government officials and the general public.