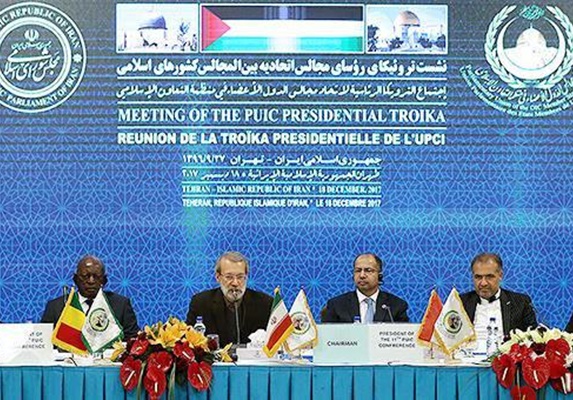 The Parliamentary Union of the Organization of the Islamic Cooperation Member States' (PUIC) Presidential Troika has wrapped up its meeting in Tehran by issuing a final statement in support of Palestine.

The statement, which was issued on Monday at the conclusion of the PUIC meeting in Tehran, came in response to US President Donald Trump’s recognition of Jerusalem al-Quds as the Israeli regime’s capital.

According to a Farsi report by ICANA, the meeting was attended by parliament speakers of Iran, Iraq and Mali as well as members of the PUCI’S Pa lestine Committee and a host of Muslim countries’ ambassadors to Tehran.

The Troika statement categorically rejected Washington’s decision, and dismissed it as blatant encroachment upon the Palestinian nation’s inalienable rights.

“The decision is an invalid move which has hurt the feelings of all Muslims, Christians and freedom-seekers across the world,” read the statement.

The Troika members also underlined the necessity of unflinching support for the Palestinian nation’s ongoing struggles.

The statement also read that Palestinians are entitled to resistance against Israeli atrocities in order to secure their legal rights, including Palestinian refugees’ right to return to their homeland and the right to establish a Palestinian government.

The Troika also called on the Inter-Parliamentary Union to revoke the membership of the Israeli Knesset.

In the statement, the Troika underlined that all Palestinians kidnapped or imprisoned by the Tel Aviv regime as well as the ones under administrative detention must be released.

The Troika urged the member states which have political and economic ties with Israel to suspend their relations over Washington’s decision.

The Troika also called on all PUIC member states to actively participate in the 13th meeting of the union’s parliament speakers scheduled for January 13-17 in Tehran with “al-Quds” as the main theme of the event.