Presidents of Iran and Croatia Call for Closer Anti-Terror Cooperation 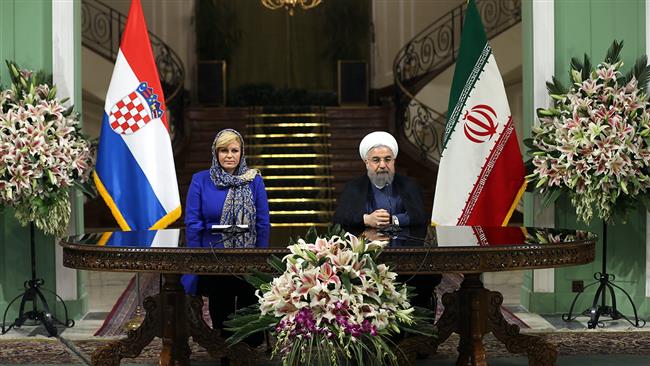 Iran and Croatia have emphasized their determination to step up Tehran-Zagreb cooperation in the fight against terrorism and extremism, particularly in the troubled Middle East region.

In a joint press conference following a Wednesday May 18 meeting in Tehran with his Croatian counterpart, Kolinda Grabar-Kitarović, Iranian President Hassan Rouhani said the two sides have agreed to enhance their anti-terrorism cooperation given the current wave of terror threats plaguing some regional states.

Rouhani said his earlier talks with Grabar-Kitarović focused on the need to expand bilateral anti-terrorism cooperation, among other issues of mutual interest.

Elsewhere in his remarks, the Iranian president called for closer relations between Tehran and Zagreb in various areas, especially economics, culture and tourism, saying the visit by Grabar-Kitarović at the head of a high-ranking economic delegation shows the political will in Croatia to bolster trade ties with the Islamic Republic.

Grabar-Kitarović, for her turn, highlighted the scourge of terrorism gripping countries like Iraq, Syria and Afghanistan, stressing that her country would “keep up cooperation with Iran in efforts to uproot terrorism and extremism.”

She also described her trip to Tehran as a “turning point” in Iran-Croatia relations, particularly in the economic sphere, saying the two countries should work to expend their relations, “which are not currently at a satisfactory level.”

“The Islamic Republic of Iran can view Croatia as a good friend and partner in the European Union,” Grabar-Kitarovićadded.

Zagreb is aware that Iran is seeking to modernize its industry and economic infrastructure, said Grabar-Kitarović, adding that “Croatian companies stand ready to cooperate with Iranian firms to that effect.”

Ahead of the two presidents’ press conference, senior officials from Iran and Croatia signed two agreements for the enhancement of economic and trade cooperation between Tehran and Zagreb.

Grabar-Kitarović arrived in Tehran for a three-day visit on Tuesday and was officially welcomed by her Iranian counterpart on Wednesday.