A row over the copyright of a sketch image proves that professional ethics is essential to healthy competition.

What appears below is the story of a row between two artists over a picture. The lesson one can take away is that adherence to work ethics, and recognition of intellectual property can produce healthy competition. It is not surprising that pundits say, “At all times, ethics is one step ahead of the law.”

Photoshop work or photo? Which expression about the image that appeared on the front page of “Shargh” [East] Newspaper following the demise of prominent Iranian poet Simin Behbahani sounds to be right? The sketch artist is of the conviction that he is the creator of the artwork, whereas the photographer contends that since his photo played a vital role in the creation of the sketch and there was no mention of him, copyright laws have been violated.

In light of the fact that Iranian newspapers face limitations about publishing the images of women on their front pages, the daily decided instead to have a photoshopped image of hers published. Graphics designer Shahab Jafarnejad was tasked with working on the image. […]

However, after the appearance of the work in the paper, photojournalist Arash Ashournia in a critical comment posted on his Facebook page argued, “It’s nothing new to see my photos appear in papers, magazines, Facebook or Twitter without permission after their logos or the name of the website they belong to are removed. […] That some turn a photo into a painting with the help of software and then publish it under their own names sound to be a new trend, though. […]”

In response to comments by Ashournia about the image, Shahab Jafarnejad argued, “First of all, to draw a sketch of a person, the sketch artist needs to see that person. It’s impossible to draw a sketch from memory. Second, if the photographer assumes that I have tweaked the photo with Photoshop, I am ready to post the different layers of work online to let him know that he is mistaken.” He later put the layers of his Photoshop work on the page for the public to judge.

[…] Gradually the heated debate shifted to “To what extent one who has designed an artwork based on a photo can claim the right to its ownership?” The response to that question generated different and even contradicting comments.

Eventually, Jafarnejad made another comment, and stated, “I looked at the matter from another angle. I wondered how I would feel if my work were published with some changes without any mention of my name and came to the conclusion that Ashournia was right. Although I came across the photo accidentally and did not know the name of its photographer, I can relate to him and admit that he is right.” 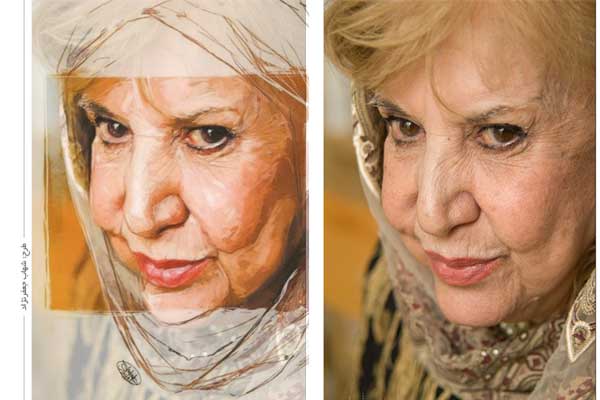 Maintaining his initial stance, Ashournia made an apology for his initial strongly-worded post. The debate, nonetheless, still rages as to whether the real creator of such artworks is the designer or the photographer. It seems the unresolved question can be addressed in an academic atmosphere where experts can work out a solution to defend the rights of the artwork creators.