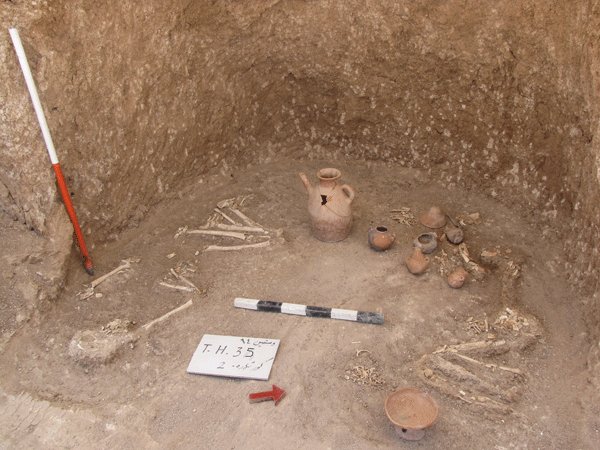 Out of 15 catacombs discovered so far, just nine are not damaged and the rest are either vandalized by antiques smugglers or destroyed by bulldozers digging for pipe-laying.

Excavations in northern Iran have led to the discovery of an ancient cemetery dating back to the Parthian Empire.

Vastmin is a village in the northern province of Mazandaran which in recent days has attracted the attention of those interested in culture, history and archeology as a historical site of Arsacid age was unearthed during excavations last month.

A village of 57 (according to 2006 census) now upstaged Kiasar, the nearby city which is the capital of Chahardangeh District, in Sari County with a population of 3,590.

The diggings for pipe-laying operations to build Damghan-Neka gas pipeline led to the discovery as workers came across some ancient antiques in the construction area and informed the local authorities of ICHTO (Iranian Cultural Heritage, Handcrafts and Tourism Organization).

Following the report, the research department of the organization issued a two-months-long warrant permitting excavations between June 6 and August 6.

The supervisor of the excavating team Abdolmotalleb Sharifi told the reporters that out of 15 catacombs discovered so far, just nine are not damaged and the rest are either vandalized by antiques smugglers or destroyed by bulldozers digging for pipe-laying.

The catacombs are comprised of chambers 0.7 meter in width, 1.7 meters in length, and 2 to 2.5 meters in height.

Sharifi also referred to a dome in the western wing of the necropolis with a height of 1.5 to 1.7 meters.

Hints at the site suggest that after the burial of the body, the belongings of the dead were also put in the chamber, and then the hole used for burying was blocked by mud and stone.

According to the findings, the chambers were used more than once and the clues show that at least three corpses were buried in each chamber.