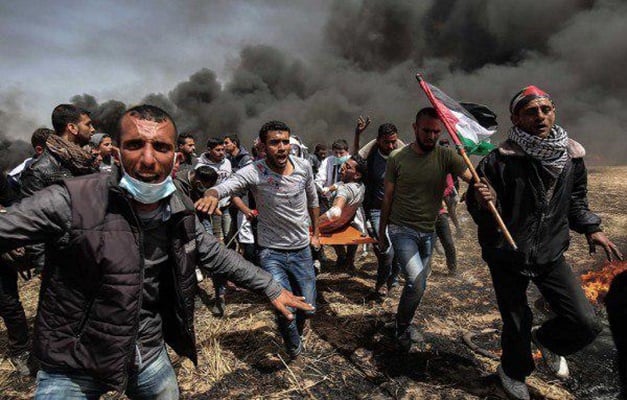 At least 52 Palestinians in the Gaza Strip have been killed and over 2,400 others injured by Israeli forces in the Gaza Strip as anger is boiling up in the occupied Palestine over the relocation of the US embassy from Tel Aviv to Jerusalem al-Quds.

Clashes have been underway on Monday, the day the US embassy was relocated to Jerusalem al-Quds. The victims include teenagers aged 15 and 16.

The rallies known as the “Great March of Return” are due to climax on Tuesday, the 70th anniversary of Nakba Day (Day of Catastrophe) when the Israeli regime was created.

The Palestinian Authority has accused Israel of massacring the protesting Palestinians in Gaza. According to the PA, moving US embassy to al-Quds would fuel instability and incitement in the occupied lands. The Palestinian Liberation Organization has also called for a general strike.

Israel’s violence against the protesting Palestinians have sparked outcry from many regional and trans-regional states as well as international rights bodies.

Iran has condemned Israel’s massacre of Palestinian protesters in the Gaza Strip. In a tweet, Foreign Minister Mohammad Javad Zarif said while Palestinians are killed by Israeli forces, US President Donald Trump is celebrating the relocation of the US embassy from Tel-Aviv to Jerusalem Al-Quds.

Secretary General of Lebanon’s Hezbollah Movement Sayyid Hassan Nasrallah vehemently condemned the Israeli aggression and said what is unfolding today in Palestine is the continuation of the crimes which have been underway over the past 70 years.

He went on to say that the US provocative measures in the Palestinian lands are adopted with the aim of putting further pressure on Iran as the main sponsor of resistance front in the region.

The European Union has urged utmost restraint to avoid further loss of lives in Gaza.

Russia has expressed concern about the transfer of the US embassy, saying it can increase tensions in the region. Turkish president Recep Tayyip Erdogan has also condemned the move as “very very unfortunate”.

The UN Convention on the Elimination of Racial Discrimination has called for an independent l investigation into Israel’s aggression against the Palestinians in Gaza. It also urged Israel to immediately put an end to its violence in the region.

Amnesty International said in a tweet that the bloodshed along Gaza’s border fence with Israel was an “abhorrent violation” of human rights.

Arab League chief, Ahmed Abul Gheit, slammed certain “shameful” countries, which he said were celebrating the opening of the US embassy in Jerusalem al-Quds.