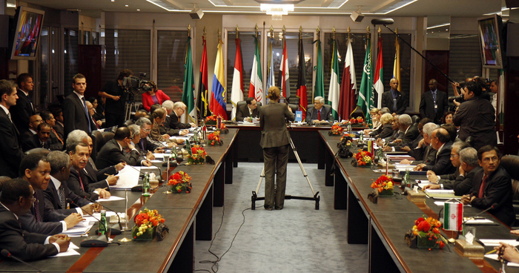 An Iranian energy expert says Saudi Arabia’s deliberate manipulation of oil prices and its overproduction are to blame for the sharp pains the glutted market feels.

Plummeting oil prices are still grabbing headlines around the world. Hamshahri Diplomatic, a periodical which focuses on Iran’s foreign policy and international developments, ran in its 85th issue an opinion piece on the ramifications of a risky oil gamble involving the US and Saudi Arabia.

The following is a partial translation of the piece by Ali Biniaz, Ph.D., who is the director of the Office for International Economy and Energy Studies at the Institute for Political and International Studies (IPIS), a well-known Tehran-based think-tank affiliated to Iran’s Ministry of Foreign Affairs:

World oil prices have hit [six-year] lows in recent months, raising questions as to what has caused the slump in crude prices and who the eventual winners and losers of this game will be. To answer these questions, an array of economic and political factors should be taken into account.

The continuing economic recession in the West and in the emerging economies such as China and Brazil – on the demand side – and growing shale oil and gas production in the US, and more importantly Saudi Arabia’s overproduction (more than its OPEC quota) – on the supply side – are to blame for the plummeting prices.

Some analysts, including Thomas L. Friedman, [a New York Times Op-Ed columnist], have gone even further talking about an oil alliance between the US and Saudi Arabia only to bring pressure to bear on Iranian and Russia economies.

Others, however, say Riyadh’s oversupply of oil is expected to sound a stern warning to Washington. Through a glut of cheap oil on the market, low oil prices might also drive unconventional oil industries out of business.

To prevent this, the US may decide to renew its previous political allegiance to Saudi Arabia and bolster it in the face of Iran’s growing regional power. For its part, Riyadh can punish Russia and force it to adopt a constructive approach to the Syrian crisis.

The Kingdom might also expect Iran – which is hit by painful sanctions – to learn a lesson from the Saudi behavior and not to cross the unwritten red lines in Iraq, Syria and the Middle East, those which are associated with Saudi interests.

Apart from Iran and Russia’s economic vulnerability, what does a steep drop in oil prices mean to the US and Saudi Arabia? […]

Currently Saudi Arabia’s foreign exchange reserve stands at $741 billion. Riyadh, whose trade surplus stood at $15 billion last year, has settled the debts arising from its hefty arms purchases. So it will not feel the financial pinch in the next two or three years even if oil prices remain low.

Although Riyadh, as some analysts say, intentionally plays the oil price card to deal a blow to nascent US oil and gas industries and make them bankrupt, these small and big industries, which have left behind the embryonic stage and gone through technological trials and errors, seem unlikely to take a beating.

The price tag for producing one barrel of unconventional oil has reportedly slipped below $50 in the US. That means the unconventional oil industries have managed to rise above the challenge after sustaining losses, undergoing mergers and shaping an efficient industry thanks to the drastic drops in oil prices.

Despite short-term, yet alluring geopolitical benefits of lower prices for the US and Saudi Arabia, the two countries, that face a common challenge – IS terrorists who will gradually haunt the two governments – will be the real losers in middle and long run if the oil prices continue to take a dive as a result of manipulations.

It is surprising that US strategists who are enraged at Iran and Russia and have got caught in a Zionist trap to bring Tehran to its knees over its peaceful nuclear program have made a grave strategic mistake by resorting to the Saudi-initiated manipulation of prices. If the current trend persists, it will result in the gradual disintegration of the integrated oil market.

This would mean new initiatives can be taken by those countries involved in the oil market – at macro- and micro- economic levels – and this will finally lead to the emergence of new alliances and economic-cultural regions which can tip the international balance against developed economies.

The Integrated World Oil Market has been the strategic achievement of developed nations since the discovery of oil. The achievement now seems a few steps away from total disintegration. In the past the Seven Sisters (oil companies) defined oil as a fungible commodity [one that can be easily and inexpensively moved around, is widely distributed and can be refined into a variety of products], cut the crude oil ties with its origin and exploited it in a developed market to serve their own interests. Consequently, they funneled its fruits – on which human welfare hinged – into their own economies for years and manipulated nominal dollar rates to prevent a reasonable rise in oil prices.

Now this commodity is reestablishing ties with its origin during a complicated transition of international relations; at a time of an IT revolution which has brought new players into the scene; at a time when a wide chasm has surfaced between the Cold War-era military powers and the economically developed bloc; at a time when ideological confusions of the military bloc – Cold War relics – may be a sign of the emergence of a new ideological bloc assisted by other [nations]; at a time when nobody knows what will become of a mix of Internet-motivated social movements and a yawning income gap among people in developed nations; at a time when religious movements – both violent groups like IS, and a peaceful, humane model such as Iran’s Islamic Revolution inspired by Shiite Islam – are likely to target the two allied nations, Saudi Arabia and the US, as part of soft warfare.

It’s unclear how social movements will combine in the economically developed bloc or in the world of Islam. Nonetheless, China is yet another factor in this calculus; its ostensibly humble, but complex game, its past which remained detached from religion, its uncertain future – since it is seeking to hold sway or pose a threat on both sides in an organized manner – are yet to be analyzed.

As things stand, the systemic manipulation of prices can promise change in the profits key oil market players reap, and signify the collapse – partial albeit – of the integrated oil market. Isn’t it strategic, yet overpriced, dauntlessness? […]

Can we assume that the de facto, or organized, oil alliance between Saudi Arabia and the US can turn into an enduring political alliance and stronger strategic partnership in the coming years? The answer is not only in the negative, but it also raises the possibility that fundamental changes in the Saudi rule are in the cards, and the outbreak of a conflict or a war between the US and Saudi Arabia isn’t a remote possibility.

The Saudi Arabia is a failed state in terms of economic and social stability. What is known today as IS in the world was – over the past two centuries – the supporting pillar of social stability to maintain the current political establishment in the Kingdom.

The threat of IS, known for what they did in Syria and Iraq and as a political enemy of the ruling Saudi government, is now the talk of the town everywhere.

Economically, the gravity of the regime’s bankruptcy is not weaker than its social and ideological failure. A static, non-innovative, oil-dependent economy, which is the historic product of the extremist social system of Wahhabism, is not potent enough to grapple with the world’s military, political and economic hegemony; nor does this establishment have any value for the global hegemony to try to keep it in power in the years and decades to come.