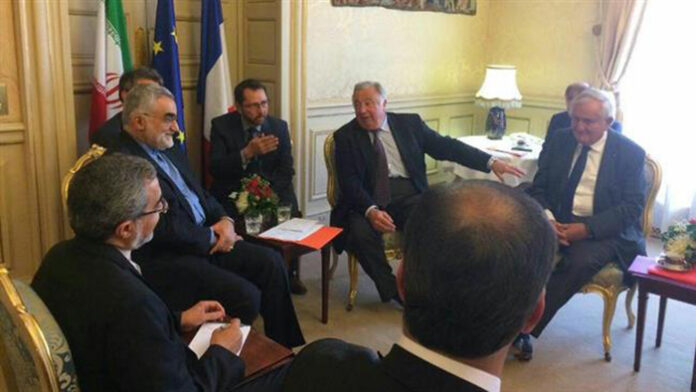 An Iranian and a French parliamentarian have stressed the significance of further progress in the relations between Tehran and Paris.

Alaeddin Boroujerdi, who is the chairman of the Iranian Parliament (Majlis)’s Committee on National Security and Foreign Policy, and Gérard Larcher, the president of France’s Senate met in Paris on Tuesday, discussing relations between their respective countries.

They also talked about regional issues, including the crisis in Syria, the developments in Iraq, the situation in Yemen, Lebanon’s efforts to elect a new president, and the region’s fight against terrorism.

The Iranian parliamentarian also asked Paris to take a constructive and serious stance against the bombardment of Yemen by Saudi Arabia and Riyadh’s attacks on civilian facilities.

Boroujerdi also brought up the developments in the bilateral ties over the past year, especially the trip made by Iran’s President Hassan Rouhani to France, which featured the inking of documents of cooperation, calling the visit a launch pad for better mutual relations in the future and urging the implementation of the cooperation agreements.

He made the trip following the implementation of a nuclear agreement known as the Joint Comprehensive Plan of Action (JCPOA) between Iran and the P5+1 group of countries in the same month.

The deal had been reached in July 2015, and France is one of the sides to the deal.

Under the deal, Iran undertook to put limitations on its nuclear program in exchange for the removal of nuclear-related bans imposed against it.

During the Tuesday meeting with Boroujerdi, Larcher said that following the nuclear agreement, the removal of sanctions, and the expansion of bilateral ties, “we should be able to support the two sides’ financial institutions and pave the way for their cooperation by removing the banking obstacles facing them.”