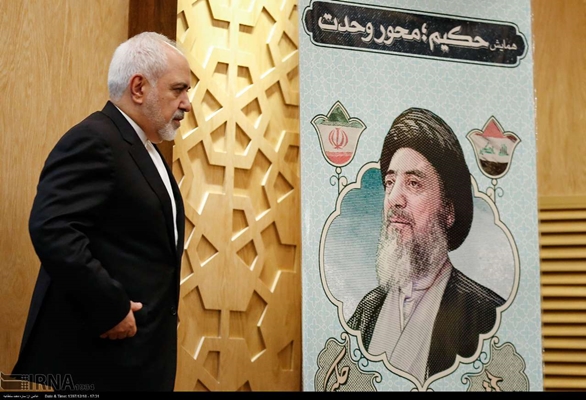 Iranian Foreign Minister Mohammad Javad Zarif says no power in the world can cause rift between the two neighbouring nations of Iran and Iraq.

Zarif made the comments in a Saturday address to a conference entitled “Martyr Hakim; Axis of Unity”, which was held at the University of Tehran in commemoration of the late Iraqi Shiite cleric Ayatollah Mohammad Baqir al-Hakim.

The Iranian top diplomat referred to al-Hakim as a role model in Islamic ethics, saying that the cleric’s characteristics played a key role in the creation of today’s Iraq.

“If it wasn’t for Martyr Hakim’s characteristics, we would be facing a totally different Iraq today.”

According to the top diplomat, the groundwork laid by the late cleric in Iraq has ended up in today’s deep and institutionalized relations between Iran and Iraq.

“Today, we see that no power in the world is capable of separating the two nations from each other. The relations started with the [creation of] Badr organization in fight against [former Iraqi dictator] Saddam [Hussein] and continued until today with Hashd al-Shaabi (Popular Mobilization Units) [in fight against ISIS].”

“And we saw how the Iranian and Iraqi nations stood by each other in fight against Takfirism and terrorism,” he said.

The Iranian foreign minister said the cleric was martyred by the most corrupt individuals on the earth, namely the Takfirists.

“As a result of his martyrdom, the blood of Iranians and Iraqis was blended in fight against Takfirism, ISIS and [other] terrorist groups,” he said, adding that such unity will never allow any division between the two countries.

According to Zarif, Martyr Hakim prudently thwarted some highly dangerous plots hatched against the future of Iraq. “He managed to pass through the dangerous stage in Iraq’s history through his wisdom and tack.”

The Iranian top diplomat referred to his recent five-day visit to Iraq and said during the meetings he held with various Iraqi factions, he “wholeheartedly” felt that the two nations of Iran and Iraq are inseparable.

“Tonight I will depart for Iraq for the historic visit of President [Hassan] Rouhani to the neighbouring state and I’m sure the visit will reveal that the two nations serve as the beating heart of the region,” he said.

According to Zarif, without Iran and Iraq, the region will see no tranquility. “The two countries serve as the pillars of regional security and we hope that with the new initiatives adopted by Iraqi parties, we would be able to take a step forward.”

He once again praised Martyr Hakim and said the cleric was not only a Shaheed al-Mehraab (Martyr of Sanctuary) but also a Martyr of Unity.

“Today we see there are groups in Iraq made up of all religious and ethnic groups. In one of my visits to Iraq, I held talks with two alliances led by Ammar al-Hakim and our brothers in Badr [Organization].”

“In today’s Iraq, all groups from Shiites and Sunnis to Kurds, Turkmens and Christians have come together and this is a great victory for the unity in Iraq which Martyr Hakim had heralded,” he concluded.

Ayatollah Mohammad Baqir al-Hakim was a senior Iraqi Shiite cleric and the leader of the Supreme Council for Islamic Revolution in Iraq. He was assassinated in a bomb attack in Najaf in 2003.