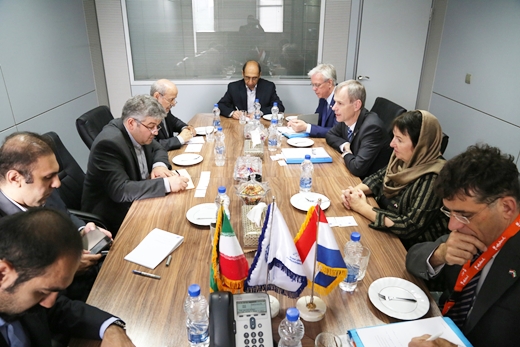 In this meeting, Farhad Sharif highlighted the diversifying economy of Iran, as well as the need for giving the private sector more chance to develop infrastructure projects and play more active roles in the Iranian economy and sustainable development. He said, “After the JCPOA, many delegations have come to Iran in order to find their counterparts for long term business relationships, in order to access the regional market.”

Mentioning the policy of a resistant economy, Sharif added, “The ground is well-prepared with well-educated human resources and security, in comparison with our neighbours, to work in fields such as renewable energy, water management and irrigation systems, healthcare, and the services related to these sectors.”

He continued, saying, “You should offer packages of services like educational and research besides selling your products to Iranian markets. In addition, you should find reliable partners to make joint ventures in order to access the regional market around our country.”

For his part, Marten C. van den Berg, the Dutch vice minister for foreign trade, mentioned that this was his second mission to Iran, due to the eagerness of the government and Dutch companies to expand economic relationships with Iran. He commented that some of the companies had had more than one trade trip to Iran after the JCPOA to develop their market and meet their counterparts.

Referring to the lifting of sanctions, Van den Berg said, “All the European Union sanctions have been lifted, but the primary sanctions of the USA prevented us from developing our relationships with Iran. Some private banks are trying to find a solution to connect with Persian banks to expand economic exchange between the two countries.”