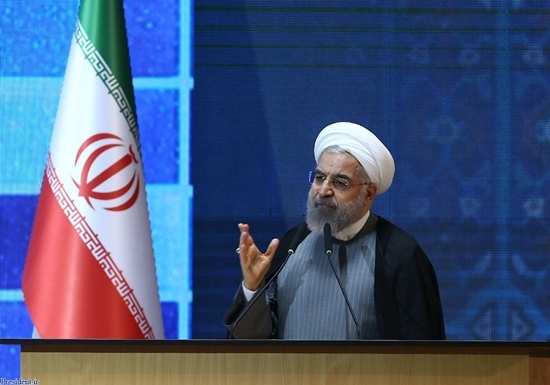 Islam is fully observed when extremism and violence are nowhere to be found in an Islamic society, says President Rouhani.

President Hassan Rouhani has said that the holy Koran is for Muslims and that the real nature of the Muslim faith would slip into oblivion if and when non-Muslims excelled Muslims in obeying the Koranic teachings.

The president made the remark in a speech at the opening of the 32nd International Holy Koran Competitions in Tehran on Friday and added that the Holy book is the most important factor in boosting Muslim unity.

He further said that we should plunge into the depths of the Holy Koran and see [for ourselves] how the insight we get from the divine book affects our lives.
Aftab-e Yazd on May 17 covered Rouhani’s remarks at the event. The following is the translation of the highlights of the president’s remarks:

The Koran is a blessed book and any group or society which follows its verses in practice would get blessings and goodness.

May there not come a day in which non-Muslims take the lead when it comes to implementing what the divine book instructs.

May it not happen that we keep our distance from science – to which the holy Koran has invited us – while others, non-Muslims included, practice what it preaches and become [real] thinkers and scientists.

Islam means honesty, chivalry, tolerance, brotherhood and helping others. Islam means [a time when] extremism and violence are not seen or practiced in society.

Can we claim to be Muslims and followers of the Koran if we rain down bombs and missiles on our neighbors only to cement our regional hegemony? Have we obeyed what Islam and law say if we bankroll and strengthen the extremists and terrorists instead of assisting those who live in reduced circumstances and the oppressed in the world of Islam?

Today the world of Islam needs to observe the Koranic rules and the traditions of the Muslim Prophet.

May we not see a day in which nothing has been left of Islam but a name and the holy Koran is just a sign. If we see such a day, that would be a day in which we are flanked by magnificent buildings such as mosques, but guidance remains elusive.