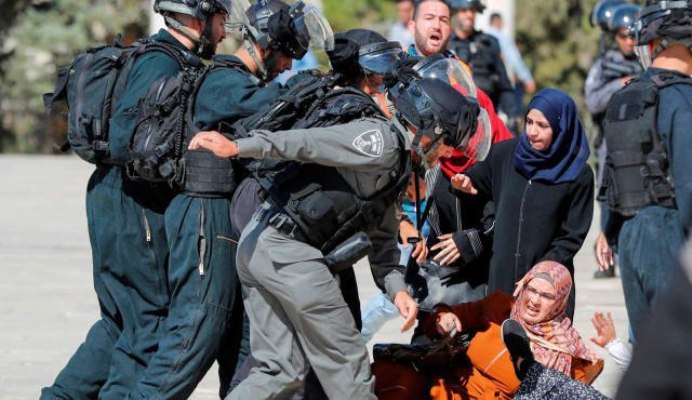 Iran’s Foreign Minister Mohammad Javad Zarif has called on the Muslim world to unite against the Israeli regime’s tyranny against Palestinians, preventing Tel Aviv and Washington from imposing the “Humiliation of the Century” on Palestine.

In a tweet on Sunday, Zarif posted a photo of the Israeli forces’ latest assault on Palestinian worshippers in the al-Aqsa Mosque on Sunday morning, which coincides with the Muslims’ holiest day of Eid al-Adha (Feast of Sacrifice).

“The same terrorists are hoping to impose Humiliation of the Century on Palestinians,” Zarif said, referring to the US’ so-called peace plan for the Middle East, which Donald Trump’s administration calls “Deal of the Century”.

“We Muslims have power to end this tyranny, but only if we united,” the Iranian top diplomat added.

His comments came after the Israeli police clashed with Palestinian Muslim worshippers in the al-Aqsa Mosque compound on the start of Eid al-Adha festivities.

Violence erupted on Sunday morning after Israeli policemen fired stun grenades and tear gas at the Palestinians who had finished their Eid prayers.

The Palestinian Red Crescent said that at least 14 worshipers had been injured in the clashes inside the al-Aqsa Mosque compound, which lies in the Old City of Jerusalem al-Quds.

Earlier, Leader of Iran’s Islamic Revolution Ayatollah Seyyed Ali Khamenei had noted that the “deal of the century” is a crime against humanity, urging “everyone” to help defeat it.

“The ploy of the ‘deal of the century’ which is being plotted by the oppressive America and its treasonous cohorts is a crime against human society, and not just the Palestinian nation,” the Leader said Saturday in his annual Hajj message.

“We are inviting everyone to actively participate in defeating the enemy’s ploy and deception and believe that with the power and strength from God, this and all other ploys of the imperialist front is doomed to failure vis-a-vis the efforts and faith of the resistance front,” he added.

The “deal of the century”, a backchannel plan to allegedly reach a peace settlement between Israel and the Palestinians, is reported to recognize Israeli occupation of Palestine in exchange for economic incentives. The plan has widely been rejected by the Palestinians.