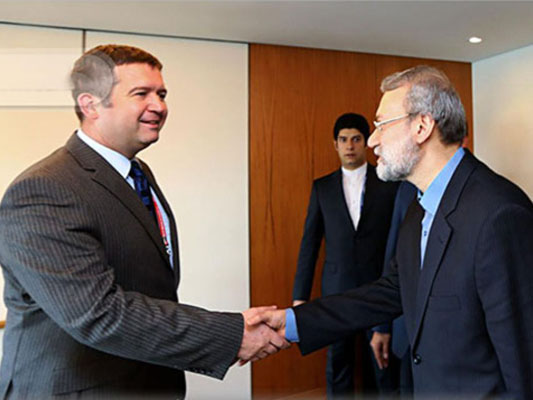 It is regrettable that terrorism has already developed into a global plight, Larijani said, adding the establishment of multilateral relations can facilitate the regional states’ war on terror and drug trafficking.

Speaking in a meeting with his Czech Republic counterpart Jan Hamáček, Larijani noted that the progress of terrorism is partly due to the behind-the-scene logistic support that the terrorists are receiving.

“The Islamic Republic of Iran has good experience in the war on terror, and has shared it with the Iraqi and Syrian officials to counter ISIS terrorists in their countries,” he added.

Elsewhere in the meeting held on the sidelines of the Second Meeting of Parliament Speakers of Eurasian Countries in Seoul, he also expressed his thanks to Hamáček for extending the Czech Republic’s condolences to Iran over the latest terrorist attacks in Tehran claimed by ISIS.

Larijani said Iran and the Republic of Czech have historical relations and the Iranians’ attitude towards Czech Republic is positive.

“The two sides used to have mutual cooperation in truck production. Iran is now interested in developing cooperation with the European country in the field of energy,” he said.

The Iranian parliament speaker went on saying that establishing close cooperation in banking system is one of the main issues that can facilitate the two sides’ economic relations.

“Close cooperation will help the businessmen of Iran and some European countries establish new relations in the banking field. To this end, some good deals have been signed,” he said.

For his part, the Czech parliament speaker strongly condemned the recent terrorist attacks in Tehran. He also invited Larijani to have a visit to Prague and said the visit can pave the way for further cooperation between the two sides.

“Iran and Czech Republic have established their relations for about 90 years and I’m personally glad to take part in a ceremony to be held in Iran’s embassy in the Czech Republic to mark the anniversary of the bilateral relations’ establishment,” he said.

Hamáček also said the bilateral relations are growing day by day and the Czech companies are very interested in promoting cooperation with their Iranian counterparts.

“The Chambers of Commerce of the two sides are active and we are planning to raise our relations to the level of ambassadors in the near future,” he said.