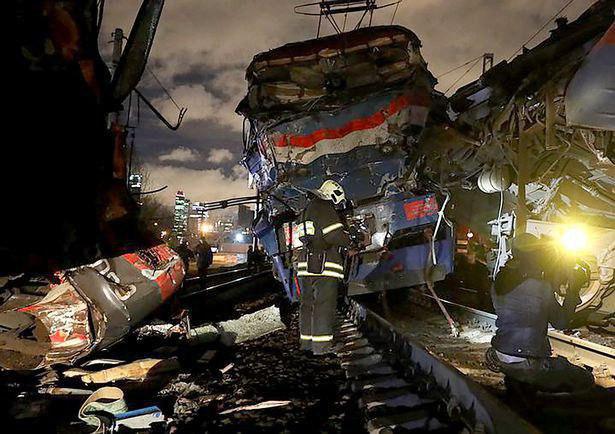 An intercity service between the Russian capital and Brest in Belarus crashed into a local electric commuter train which had braked suddenly after a man crossed the lines.

The driver of the local train then lost control as his suburban train rolled backwards into the path of the intercity service which followed it on the same line, it was reported.

Four carriages were derailed according to initial accounts, Mirror reported.

Passengers from both trains – with 445 on board in total – suffered injuries.

At least 50 needed medical assistance with 16 from the mangled carriages rushed to local hospitals, including one child.

Foreigners were among the injured, according to Emergencies Minister Vladimir Puchkov.

“According to preliminary data, the injured include both Russian nationals and citizens of several countries,” he said.

“Moscow Mayor Sergey Sobyanin, Emergencies Minister Vladimir Puchkov and Russian Railways President Oleg Belozerov briefed the head of state over the phone on steps taken to deal with the aftermath of the accident,” he said.

“Putin instructed to do take all necessary steps to remedy the situation.”

Rail services were blocked on the main westward line out of the city.

“Unfortunately, people have been affected by the accident,” said an Emergencies Ministry spokesman.