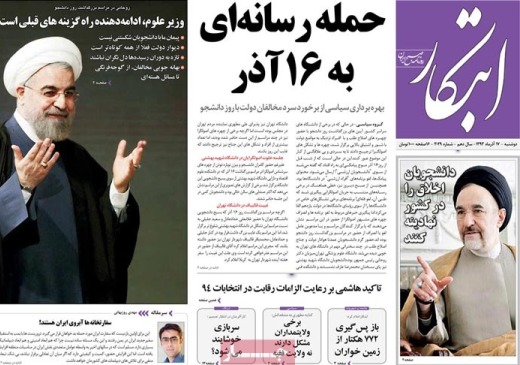 Students and Islamic Associations in universities should feel it their duty to safeguard an Islam that promotes freedom, supports independence and democracy, and promulgates morality. Students need to institutionalize morality in society and make it the cornerstone of relations among members of the public.
According to the Ebtekar daily, that was part of a video message by former President Mohammad Khatami to a University Student Day gathering at Tehran University. The following is what else the reformist president touched on in his message:
Today students shoulder a heavy burden. They should conduct research, update their knowledge and develop new sciences and at the same time care about their society. In other words, committed students should attach significance to freedom and progress at the same time.
December 7 is designated as University Student Day in Iran, a day that helps establish the identity of students and universities. At a time when a dictatorship which had the backing of foreigners, the Americans in particular, was in power, when freedom-seeking was being quelled, when parties were being put down, when Mohammad Mosadegh was in exile after his government had been toppled, flames of a movement raged in universities.
In the absence of parties, factions and social activism which had been crushed, something which in turn created a sense of despair in society, students shouted protest at the dictatorship of the time. What lends students more prominence today is that at a time when hopes were dashed and suppression reigned supreme, they stood up to authoritarianism.
Students need to throw their weight behind democracy and carry on with their social and political activities in line with the provisions of the Constitution.