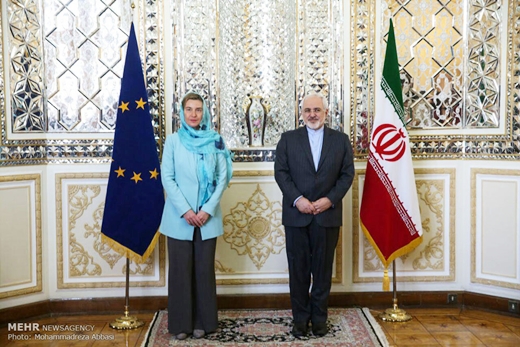 Iran conducted ballistic missiles tests on March 8-9 as part of military drills. The U.S. claimed the tests had violated the UN Security Council Resolution 2231 that endorsed the JCPOA.

Mogherini also said that the JCPOA provided proof that “diplomacy works.”
“In July we said diplomacy works, in January [on the Implementation Day] we delivered it.”
Commenting on Iran fulfilling its commitments to the nuclear deal, the top EU official said, “Iran has delivered its side of the deal and so has the EU by lifting all the nuclear related sanctions against Iran.”
On the issue of human rights, for which Iran has always been criticized by the West, she said, “Our approach to human rights [in Europe] is that we have the highest standard of the world, even compared to our partners.”
She added, “We will always engage in dialogue with Iran, as this is the way in which we support the process that the EU has done.”
Mogherini also said the EU would do all it could to help Iran gain the full benefits of the nuclear deal, including encouraging greater engagement in the country from European banks.
She added the bloc had a “very strong interest” in deepening economic ties, and that greater financial links were a key basis for that. “We are doing all that we can to reassure our financial and banking system” that we “welcome their engagement in Iran,” she said.
Mogherini, who has been to Iran once before, visited Tehran for a one-day visit at the head of a high-ranking political and economic delegation. She was accompanied by European commissioners for energy, scientific research, technology, environment, education, industry.

For his part, Zarif said if Iranians don’t sense the effect of the deal, they would question the benefit of the agreement.
Zarif continued to say that the deal has paved the ground for international cooperation and lessened threats in the region, building a better future for the region and the people of Iran.
Calling the meeting between Iran and the EU “unparalleled”, Zarif said the two sides held talks on various issues and agreed to expand cooperation in the fields of economy and finance, crisis management, transportation, education and cultural exchange, peaceful use of nuclear energy, problems of refugees and displaced people, as well as the campaign against terrorism and drugs.

Opening an EU office in Tehran is on the agenda

Zarif also added that opening an EU bureau in Iran is on the agenda.
On the issue of Iran’s missile tests, Zarif said, “The test doesn’t violate the JCPOA or any of the Security Council Resolutions.”
Zarif said Saddam Hossein shamelessly used different kinds of weaponry against Iranians, therefore, “Iranians have the right to protect themselves.”
He added, “Some of our neighbors, of a much smaller size, spend far more on military weapons than Iran. They need to lower their military expenditure.”
Iran and the EU also issued four statements for cooperation in areas of human rights, science and research, economy, agriculture, transport, energy and climate change, nuclear energy, environment, education, culture, campaign on drug trafficking, and migration.
For instance, in the case of civil nuclear cooperation and the environment, the two sides have agreed on the following:

With a view to contributing to the implementation of measures listed in Annex III of the JCPOA, the two sides are launching a first cooperation project in the field of nuclear safety, aimed at assisting the Atomic Energy Organization of the Islamic Republic of Iran and the Iranian Nuclear Regulatory Authority through EU development assistance. In addition, the EU will share with Iran its experience acquired from stress tests carried out within the EU and in third-party countries. Additional options for cooperation in the civil nuclear field include joint fission and fusion research activities, as well as a possible regional nuclear safety conference and a nuclear business forum.

In recognition of the importance of protecting and conserving the environment and the role of resource efficiency in achieving green growth, and in acknowledgment of Iran’s pressing environmental challenges, the two sides intend to:
– Establish bilateral co-operation to address air, soil and water pollution, water resource management, conservation and the sustainable use of nature, biodiversity, desertification, and waste disposal management issues.
– Exchange experience, with a view to identifying appropriate policy responses, including projects to tackle cross-border pollution.
– Strengthen co-operation in international environmental forums, including in the framework of multilateral environmental agreements.