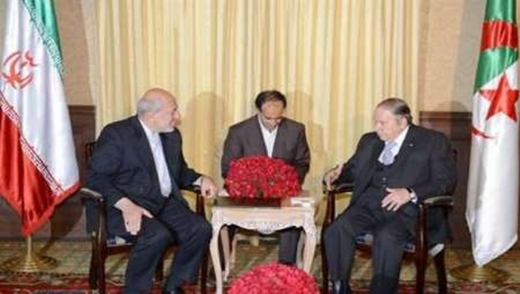 Iran’s Energy Minister Hamid Chitchian on Monday submitted President Hassan Rouhani’s message to Algerian President Abdelaziz Bouteflika, inviting him to attend a 3rd Summit of the Gas Exporting Countries Forum (GECF) which will be held in Tehran on November 23, 2015.

Bouteflika thanked the Iranian minister for the invitation and wished success for Tehran in holding the GECF meeting.

He referred to the falling oil prices and their economic impact and said Iran and Algeria should cooperate in this respect.

On regional developments, the Algerian president called for an end to violence and clashes, preventing bloodshed and establishing conditions for peace, stability and calm.

He said provoking ethnic and religious conflicts is a plot hatched by enemies to undermine countries’ security.

He added that his country opposes any foreign intervention in other countries’ affairs.

Calling Iran-Algeria political ties “good and strong”, he said his government is ready to bolster economic ties with Iran.

Chitchian in turn said Tehran is ready for continued consultation with Algeria in the field of oil price.

He called for the removal of executive problems standing in the way of the expansion of mutual economic relations and for a more prominent presence of Iranian companies in Algeria.

The GECF which was established in Tehran in 2001 has 18 members and observers.