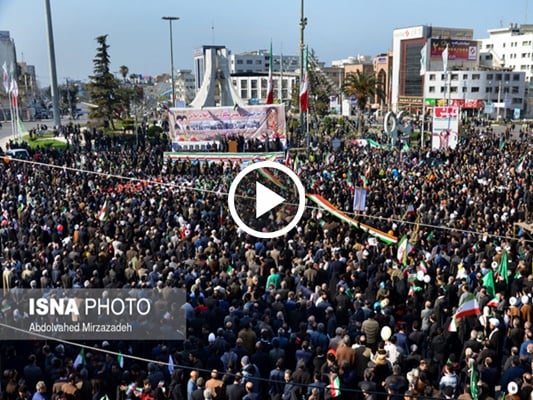 People from all walks of life have poured into streets in different cities and towns across Iran to celebrate the nation’s Islamic Revolution that put an end to the monarchical rule of the US-backed Pahlavi regime.

Each year, Iranians take to the streets to mark the historic day, which id a national holiday in Iran. People take part in these rallies renew their allegiance to the Islamic establishment and Imam Khomeini, the late founder of the Islamic Republic.

Journalists from two dozen countries are covering rallies in Tehran on Sunday, February 11. Some 125 reporters from 71 regional and international media outlets are providing coverage of the event, in which demonstrators march toward and finally converge on Azadi Square, a Tehran landmark, where Iranian President Hassan Rouhani is scheduled to deliver a speech.

Moreover, more than 150 representatives of foreign media outlets stationed in Iran are covering the event through their Iran bureaus. They are using the news feed from local Iranian media or dispatch their own correspondents to provide coverage.

Iran’s state radio and TV (known as the Islamic Republic of Iran’s Broadcasting Organization or the IRIB) is providing blanket coverage of the rallies. The event will be beamed across the world via satellite, so that foreign media will be able to relay the broadcasts to their audience.

Similar rallies are being held in other towns and cities across the nation as well.

On 1 February 1979, the founder of the Islamic Republic of Iran Imam Khomeini (1902-1989) returned to Tehran after a period of exile in France imposed by the despotic Shah of Iran, Muhammad Reza Pahlavi. Several million people went to Tehran International Mehrabad Airport to welcome him. Imam Khomeini then went to Behesht-e Zahra cemetery, where he delivered a historic speech. Imam Khomeini’s return was a catalyst for the Islamic Revolution, which finally emerged victorious ten days after his homecoming on February 11.