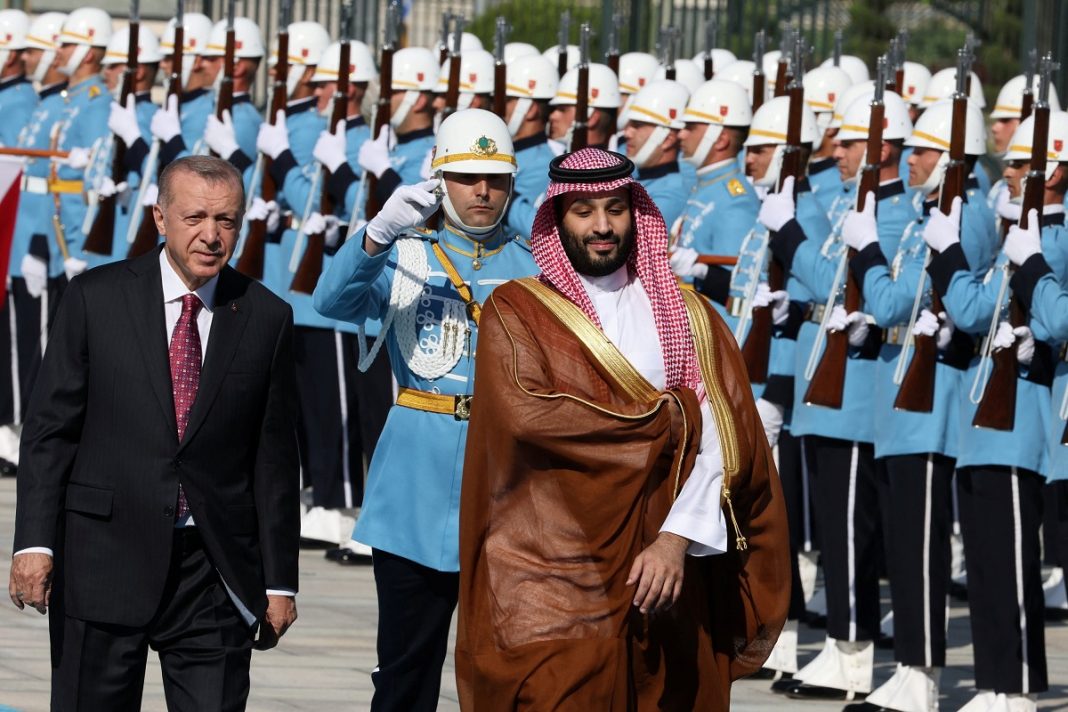 Saudi Crown Prince Mohammed bin Salman arrived in Turkey on Wednesday for the first time in years for talks with President Tayyip Erdogan aimed at fully normalising ties that were ruptured after the murder of journalist Jamal Khashoggi.

The visit marks a step in bin Salman’s effort to rehabilite his image beyond the Persian Gulf, and comes as Erdogan seeks financial support that could help relieve Turkey’s beleaguered economy ahead of tight elections for the president.

In April, Erdogan held one-on-one talks with Prince Mohammed in Saudi Arabia after a months-long drive to mend relations between the regional powers, including dropping the Turkish trial over Khashoggi’s 2018 murder in Istanbul.

Erdogan said last week he and Riyadh’s de facto leader would discuss “to what much higher level” they can take ties during talks in Ankara.

The visit is expected to bring “a full normalisation and a restoration of the pre-crisis period,” a senior Turkish official told Reuters on condition of anonymity.

“A new era will begin,” the official added.

Erdogan welcomed MbS at the presidential palace in Ankara with a ceremony and the two shook hands and embraced, before being met by members of the Turkish cabinet.

There are no public statements scheduled after their talks.

The Turkish official stated the two countries had lifted restrictions on trade, flights and the screening of TV series, with mutual negative media coverage also halted.

Agreements on energy, economy and security would be signed during the visit, while a plan was also in the works for Saudi funds to enter capital markets in Turkey, the official added.

However, he said negotiations on a possible currency swap line – which could help restore Turkey’s diminished foreign reserves – were not moving “as fast as desired” and will be discussed privately between Erdogan and the crown prince.

Prince Mohammed is on his first tour outside the Persian Gulf region in over three years including a visit to Jordan. Ties between Ankara and Riyadh took a turn for the worse after a Saudi hit squad killed and dismembered Khashoggi in 2018 at the kingdom’s consulate in Istanbul.

Erdogan at the time blamed it on the “highest levels” of the Saudi government.

The visit, including the welcoming ceremony at the palace, marks a turnaround in their relations. Ankara stopped all criticism and halted its murder trial in April, transferring the case to Riyadh in a move condemned by human rights groups.

Prince Mohammed has been leveraging Saudi Arabia’s vast wealth and oil production capacity to lure in Western leaders and private business partners, hoping shifting geopolitics and a focus on social and economic reforms would soften criticism of his human rights record.

US President Joe Biden is set to visit Saudi Arabia in July as Washington struggles with record high gasoline prices and building a united front against Russia after its invasion of Ukraine.

The visit also comes as Turkey’s economy is badly strained by a slumping lira and inflation soaring beyond 70%. Saudi funds and foreign currency could help Erdogan shore up support ahead of elections by June 2023, analysts say.

The Turkish official said Saudi Arabia may be interested in companies within the Turkish Wealth Fund or elsewhere, or in making investments similar to those by the United Arab Emirates in recent months.

The leaders will also discuss the possible sale of Turkish armed drones to Riyadh, the person added.

Kemal Kilicdaroglu, leader of the main opposition Republican People’s Party (CHP), stated on Tuesday that Erdogan “will embrace the man who ordered the killing” of Khashoggi and accused him of trading “the country’s honour” for financial aid.