A look at Iranian newspaper front pages on Oct. 27

Comments by the heads of the three branches of government on a recent spate of acid attacks in Isfahan and remarks by the Supreme Leader in a meeting with the family of the late Habibollah Asgaroladi that “fatigue is not permissible when it comes to the struggle for the greater cause” dominated the front pages of a majority of Iranian newspapers on Monday. More controversy over illegal scholarships [granted to some students when former President Mahmoud Ahmadinejad was in office] was also in the news. The heavy defeats ISIL terrorists have suffered in Iraq and the likelihood of the impeachment of the minister of culture and Islamic guidance also made headlines in several newspapers.

Abrar: “The viewpoints of the committee tasked with studying the effects of satellite jamming signals should be acted on,” urged Masoumeh Ebtekar, the director of the Environment Protection Organization.

Abrar: Peyman Moaadi – an Iranian actor, screenwriter, and director – has called for charitable screening of Camp X-Ray and dedication of its proceeds to the victims of the recent acid attacks. Moaadi has played Ali Amir in the 2014 American drama by Peter Sattler which opens with hiscapture and transportation to Guantanamo Bay. 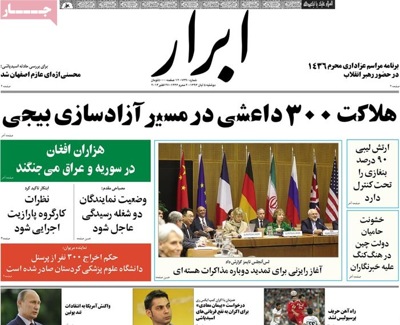 Arman-e Emrooz: “What should the Ministry of Science apologize for?” asked the acting minister. It came after Principlists urged the ministry to apologize for releasing the list of those involved in the illegal scholarships case. Words have spread that a complaint is to be lodged against the ministry.

Arman-e Emrooz: “The public responsibility to promote virtue is limited to admonition,” said the parliament speaker. 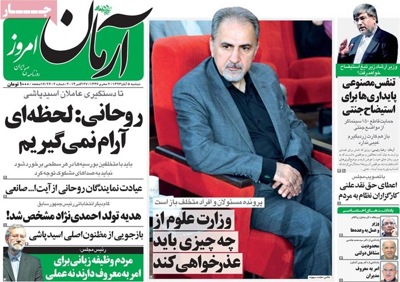 Asia: “Iran and the Netherlands are to establish a joint chamber of commerce.” 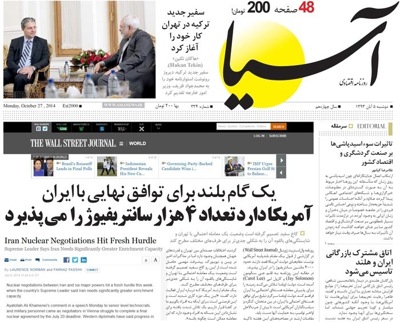 Asrar: “Iranian MPs are seeking to impeach the minister of culture and Islamic guidance.”

Asrar: “A hospital in Tehran will be equipped with equipment to [screen and contain] Ebola,” said Director of the Health Ministry’s Center for Management of Contagious Diseases Mohammad Mehdi Gouya. 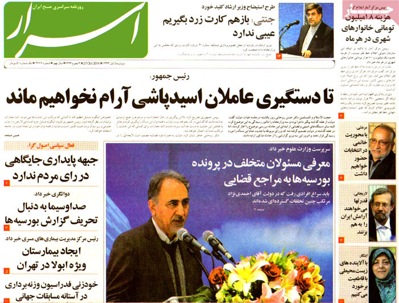 Eghtesad-e Pooya: “Efforts to lay down laws should not be politicized,” said Judiciary Chief Ayatollah Sadegh Amoli Larijani, expressing sorrow for certain local media outlets [which, as he put it, fan the flames of controversy over the acid attacks]. 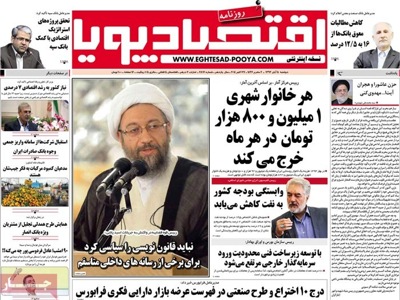 Etemad: The Ministry of Science, Research and Technology has set a 100-day deadline for the repayment of fees received by those who have been granted illegal scholarships.

Etemad: “Yet another medal for Abbas Kiarostami,” reported the daily, saying that the Austrian president has given the Badge of the Austrian Decoration of Honour for Science and Art to the world-famous Iranian director. 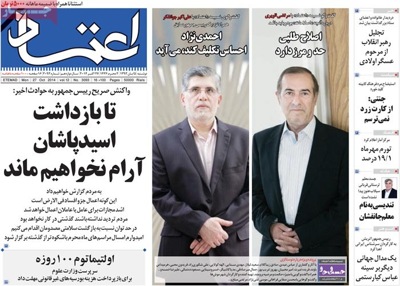 Ettela’at: “ISIL suffers heavy defeats in Iraq and Lebanon.” Abu Bakr al-Baghdadi, the [self-proclaimed] leader of ISIL, has ordered the terrorists to retreat from Lebanon and Kobani in Syria.

Ettela’at: “The case involving those implicated in granting scholarships to students [without requiring them to take tests] will be submitted to court”, said Mohammad Ali Najafi, the acting minister of science, research and technology.

Ettela’at: “The government will not rest easy until it arrests those behind the recent acid attacks in Isfahan. We will report to people any crime or question which may dent security in society,” said President Hassan Rouhani.

Ettela’at: “Select researchers have been awarded at a second Tahereh Saffarzadeh Scientific-Literary Award [in a ceremony in Tehran].” 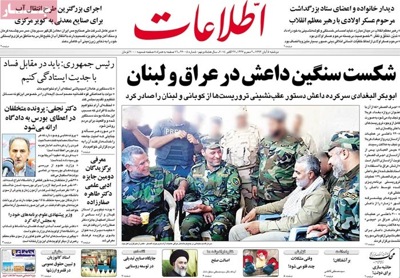 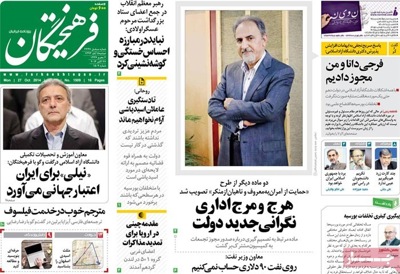 Haft-e Sobh: “The prime suspect in acid attacks in Isfahan is under interrogation,” wrote the daily, adding that deputy Judiciary chief Gholamhossein Mohseni Ejei has arrived in Isfahan to oversee the investigation into the tragic case. 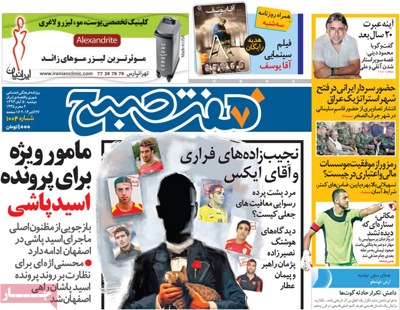 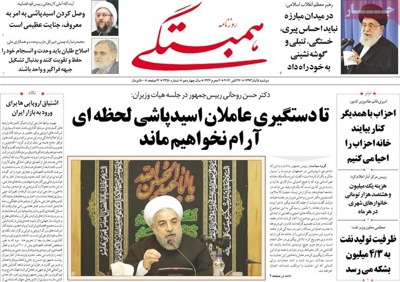 Hamshahri: “The imported camels are infected with coronavirus.”

Hamshahri: “The [hidden] threat plummeting oil prices pose to budget appropriation,” is the daily’s front-page headline which says that slumping crude prices have forced the Iranian government to review different scenarios to prevent a possible budget deficit before submitting to parliament the country’s spending package for next year (starting March 21, 2015). 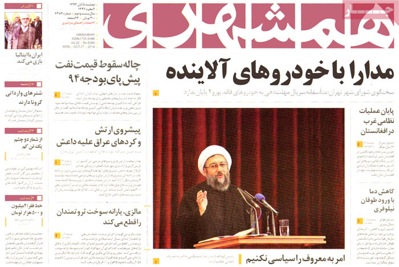 Hemayat: “Attempts to relate acid attacks to the question of virtue promotion are made by the Western and anti-revolution media to poison the atmosphere [in Iran],” stressed Ayatollah Sadegh Amoli Larijani, the Judiciary chief. 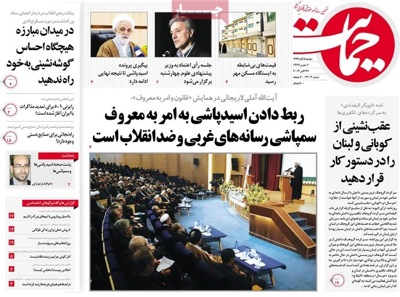 Iran: “It doesn’t matter if one is given a yellow card in their quest of [boosting] the culture,” said Minister of Culture and Islamic Guidance, Ali Jannati after being warned by MPs that he might be the next minister to be impeached.

Iran: “We should not be overcome by fatigue or exhaustion in the battlefield,” said Leader of the Islamic Revolution Ayatollah Seyyed Ali Khamenei in a meeting with the family of the late Habibollah Asgaroladi, a veteran Iranian politician. 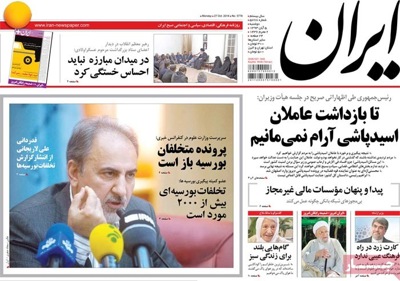 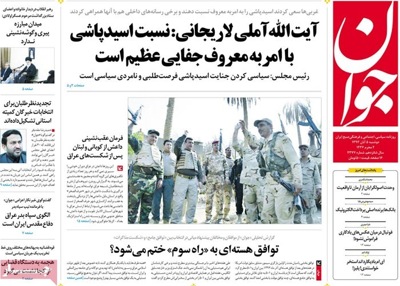 Jomhouri Islami: “Some 1,800 billion tomans (over $560 million) has been allocated to the coverage of medication used by patients with special diseases,” said a member of the board of directors of Iran Health Insurance Organization.

Jomhouri Islami: “The volume of trade with Iran will increase even if the existing sanctions remain in place,” said the president of the German Chamber of Commerce. 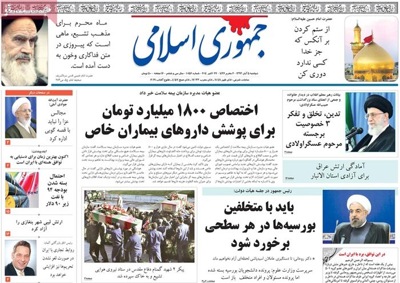 Kar va Kargar: “The public should rest assured that those involved in recent acid attacks will be dealt with seriously,” said the prosecutor general. 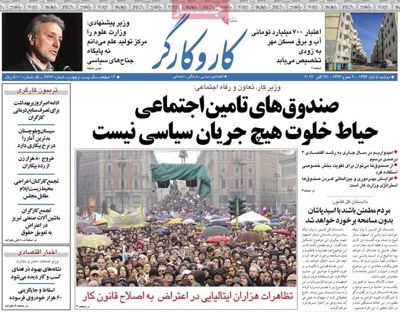 Kayhan: “Major General [Ghasem] Soleimani [the commander of the Quds Force] and the Ashura Operations he led demeaned the anti-ISIL alliance,”wrote the daily on the retaking of the city of Jurf Al Sakhar by Iraqi soldiers.

Kayhan: “Parliament will not endorse a minister who was not qualified to lead the University of Tehran,” wrote the daily, elaborating on the reaction by some MPs to the introduction of Mahmoud Nili Ahmadabadi by President Rouhani to take over the Ministry of Science, Research and Technology. 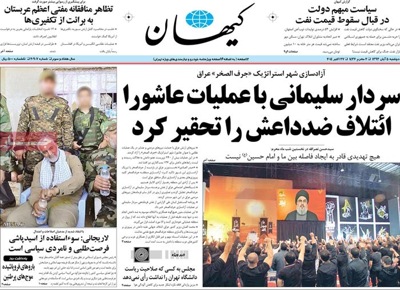 Roozan: “Ayatollah Hashemi [Rafsanjani] is the best choice to take the helm at the Assembly of Experts,” said Mohsen Gharavian, a member of the Society of Seminary Teachers of Qom. 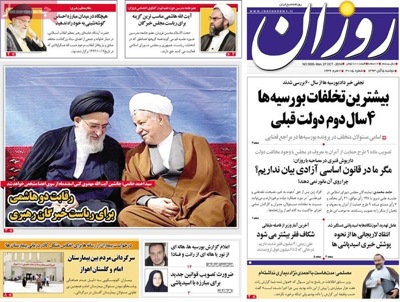 Shahrvand: “A person threatening citizens with acid attacks has been taken to custody in the capital.”

Shahrvand: “The ministry of science could have dismissed as many as 840 students but showed tolerance,” said the acting minister of science, research and technology in reference to a number of students who were not qualified for scholarship but were granted anyway. 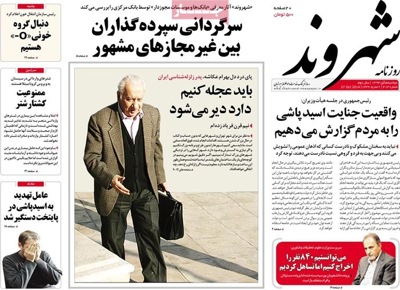 Sharq: “Plans to introduce a single foreign currency exchange rate have been put on hold,” said Farhad Nili, the Director of the Monetary and Banking Research Institute (MBRI) at the Central Bank of Iran in an exclusive interview with the daily. 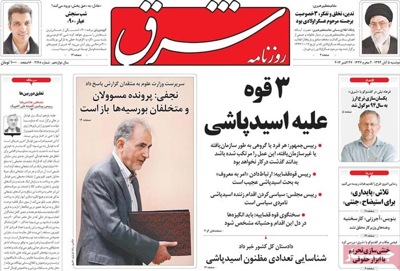 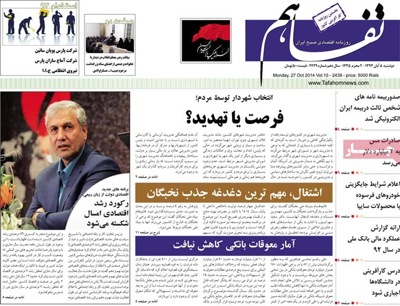