A look at Iranian newspaper front pages on Dec. 1

Remarks of the Supreme Leader in a meeting with a group of senior Navy officers in Tehran generated headlines in Iranian dailies on Monday. The hike in the value of dollar against rial was another top story of the day. Drawing as much attention was an acid attack on the administrator of the capital’s Ziaeian Hospital Dr. Siamand Anvari.

Abrar: “Iraqi President Fouad Masoum has lauded Iran for its role in helping the Iraqis [take on terrorists].”

Abrar: “They did not allow former President Ahmadinejad to become a second Amir Kabir! [a 19th century chief minister who is widely respected as Iran’s first real reformer],” said Kamran Daneshjoo, who served as the minister of science under Ahmadinejad. 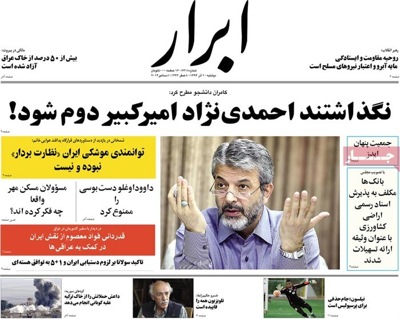 Afarinesh: “Banks should be prepared for the lifting of sanctions,” said the Central Bank of Iran. 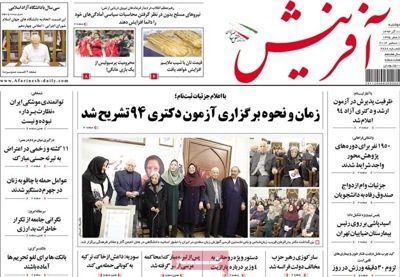 Afkar: “Yesterday, Tehran Stock Exchange experienced one of its most dramatic falls this fall, shedding 1,000 points.” 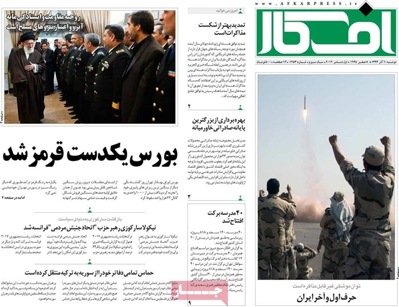 Aftab-e Yazd: “There is not much difference between Dr. Mostafa Moeen [the minister of culture and higher education under former President Rafsanjani] and [current Minister of Science, Research and Technology] Mohammad Farhadi,” said Chairman of the Expediency Council Hashemi Rafsanjani.

Aftab-e Yazd: “A special police team has been tasked with investigating the acid attack on Dr. Siamand Anvari in Tehran.”

Aftab-e Yazd: “To please a handful of hardliners, we should not back down,” said Rasoul Montajabnia, a reformist politician.

Aftab-e Yazd: “Important agreements have been reached in nuclear talks. As for Arak heavy water and the scope of enrichment we are close to a deal,” said Chairman of parliament’s National Security and Foreign Policy Committee Alaeddin Boroujerdi. 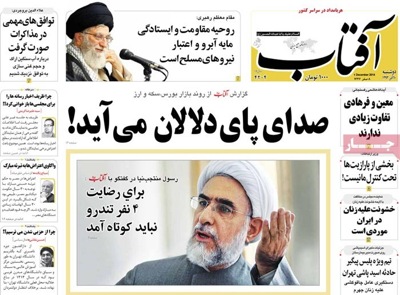 Arman-e Emrooz: “With 133 votes for, 64 against, and 11 abstentions, MPs took the first step toward ratifying a bill that proposes that the geographical area of a province determine its constituency in parliament and thus each voter can choose a representative for all provincial seats in the chamber. The bill will introduce change to the make-up of parliament.”

Arman-e Emrooz: “We do not have control over part of satellite-jamming signals,” said the minister of communications and information. 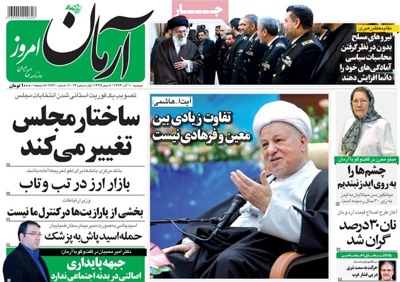 Asrar: “Calm will make a comeback to the foreign currency market,” Governor of the Central Bank of Iran Valiollah Seif said.

Asrar: “Under any condition, 70 MPs are opposed to interaction with the government,” said Masoud Pezeshkian, a parliamentarian.

Asrar: “The water level of Lake Orumiyeh has gone up 35 cm.” 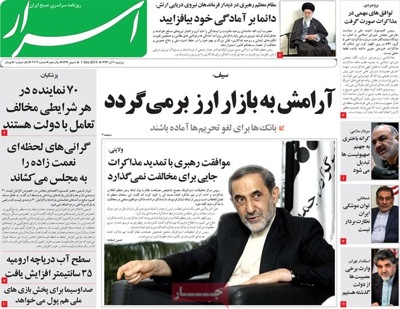 Ebtekar: “Javier Solana, the former EU high representative for foreign and security policy, has advised the West not to miss a unique opportunity for a deal [with Iran].”

Ebtekar: “President Rouhani has tasked three ministers and his deputy with handing in a report to the government about satellite jamming.” 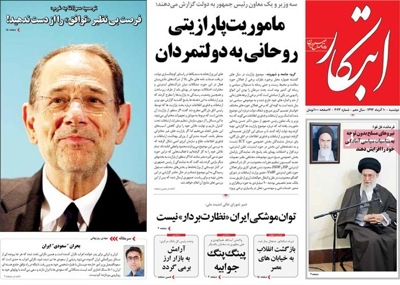 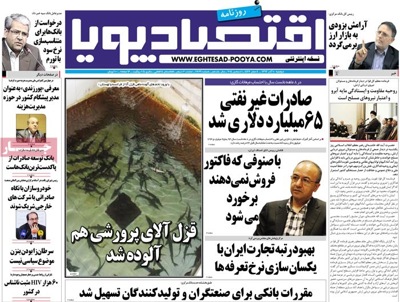 Ettela’at: “American politicians and military officials have backed the continuation of nuclear talks with Iran.” 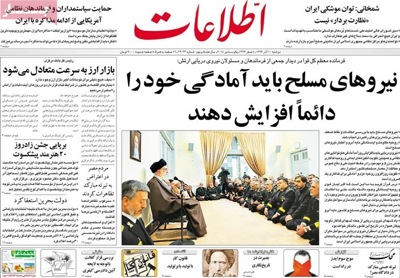 Haft-e Sobh: “In a rare incident, a young woman in Mashhad [a city in Khorasan Razavi Province]gave birth to septuplets of which six survived.” 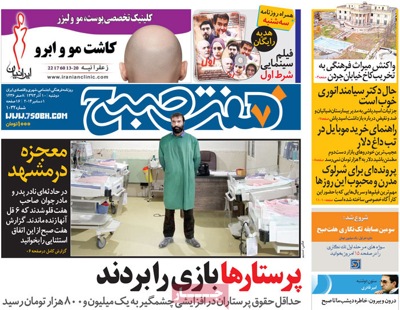 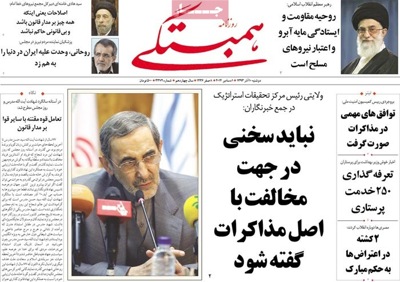 Hamshahri: “A mass killing of migratory birds as a result of the negligence of environment officials” is a headline that refers to the unbridled hunting of birds that have flown to Caspian provinces of Iran to spend the winter there. 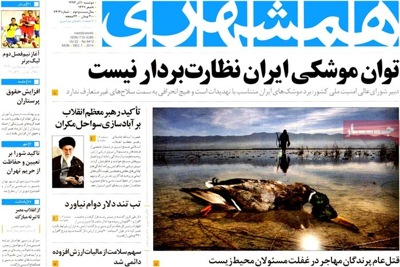 Hemayat: “An individual who attacked female university students in Jahrom, a city in Fars Province, has been arrested.”

Hemayat: “There have been bloody protests against Hosni Mubarak’s acquittal in Egypt.” 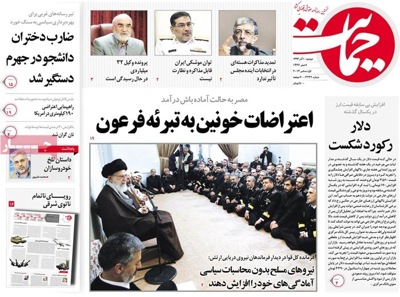 Javan: “In a meeting with Iran’s Navy commanders, the Supreme Leader advised them to enhance their preparedness regardless of political calculations.” 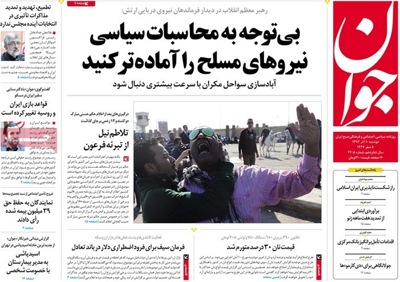 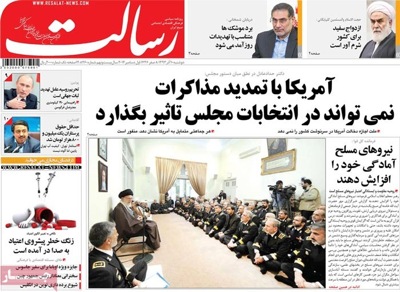 Roozan: “A war of words between Ali Motahari, a Tehran MP, and AyatollahAhmad Alamolhoda, the Friday prayer leader of the northeastern city of Mashhad and a member of the Assembly of Experts, over the duties of the assembly” is the headline that the daily put on its front page. After Motahari told Alamolhoda that his remarks that the Assembly of Experts does not supervise the performance of the leader are neither Constitutional nor in line with the opinions of the Supreme Leader, Alamolhoda argued back that those who lack wisdom are dangerous. 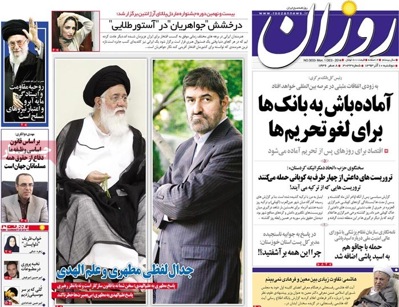 Sepid: “This time around, a doctor has fallen victim to an acid attack.” 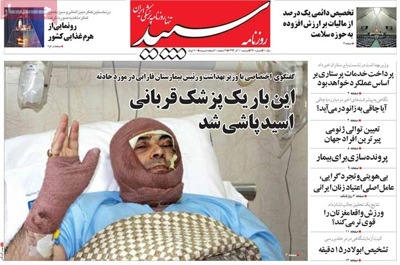