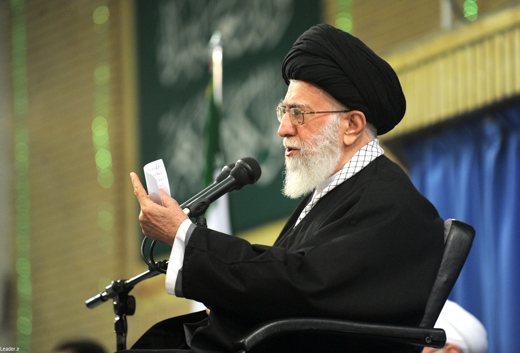 He made the remarks in his meeting with the Muslim scholars, thinkers and political figures attending the 29th International Islamic Unity Conference as well as the Islamic countries ambassadors in Tehran.

‘Today, enemies pursue civil wars between Muslims and unfortunately, to some extent, they have been successful in realization of this goal and have ruined the Islamic countries including Syria, Yemen and Libya,’ the Leader said.

He criticized pressures on Muslims in Bahrain and also arrest of Sheikh Ibrahim al-Zakzaky, the leader of the Shia Movement in Nigeria, saying that why Muslim Ummah is silent towards all these issues.

‘Western civilization has started to show its paradoxical nature and it is the turn of Islam to re-emerge,’ Ayatollah Khamenei added.

The Leader said that Muslims are duty bound to establish the new Islamic civilization.

‘I am disappointed with the Islamic World politicians, but I am hopeful about those Muslim religious scholars and intellectuals for whom the West has not become a mecca,’ he noted.

The Muslim scholars, thinkers and political figures attending the 29th International Islamic Unity Conference as well as Islamic countries ambassadors in Tehran met with the Supreme Leader of the Islamic Revolution on Tuesday.

Ayatollah Khamanei addressed them at Imam Khomeini (RA) Religious Center in Tehran on the occasion of the birthday anniversary of the Holy Prophet (PBUH) and the Unity Week.

The 29th International Islamic Unity Conference kicked off in Tehran on Sunday with the participation of hundreds of Shia and Sunni scholars and thinkers.

The current crises facing the Islamic world were the main subjects discussed in the international event, which will last until Tuesday afternoon.

The interval between the two dates is celebrated every year as the Islamic Unity Week.