Lavrov: US propaganda on ‘Russian aggression’ against Ukraine provocative 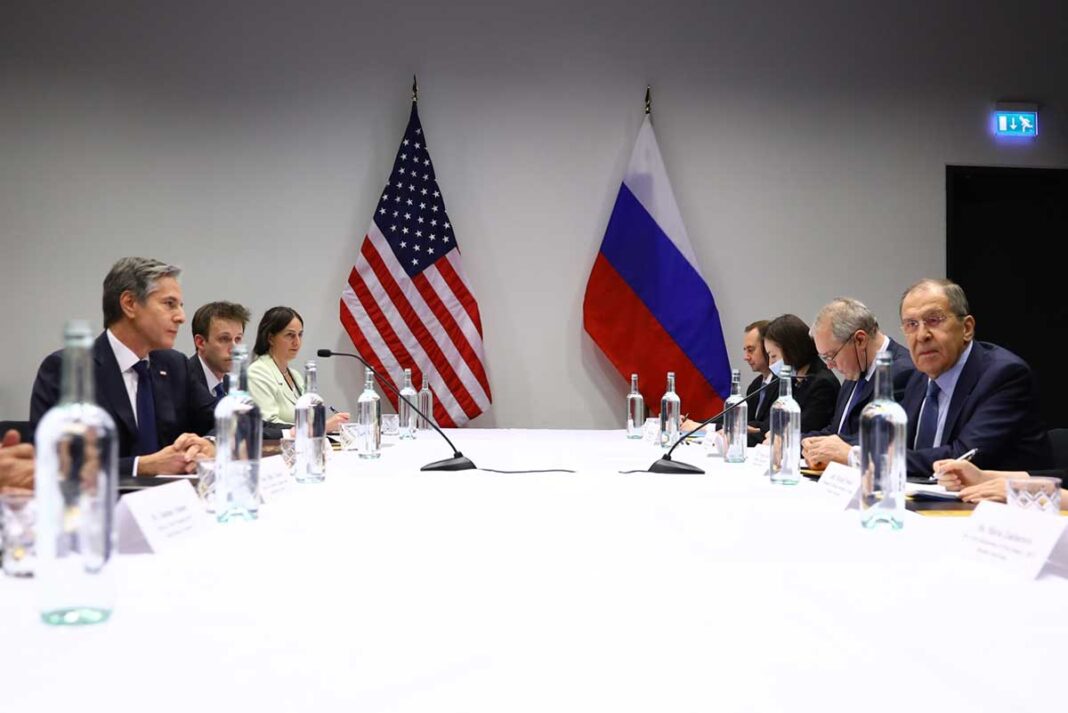 “The minister stressed that the propaganda crusade on ‘Russia’s aggression’ against Ukraine unleashed by the United States and its allies pursued provocative goals, encouraging the Kiev regime to sabotage the Minsk agreements and undertake harmful attempts of resolving the ‘Donbass problem’ with the use of force,” the Russia’s Foreign Ministry said.

The phone conversation was held at the initiative of the US side.

Lavrov stated the response by the US and NATO to Russia’s proposals on security guarantees ignored provisions fundamental for Moscow, the ministry added.

“As the Russian foreign minister pointed out, the reaction by Washington and Brussels to the drafts of the Russian-US agreement and the agreement with NATO on security guarantees that we handed over ignores provisions that are fundamental for us, primarily, the provisions that the alliance will not expand further and strike weapons will not be deployed near the Russian borders,” the statement reads.

“It was emphasized that these issues would be central in our assessment of the documents received from the US and NATO, which would be brought to the notice of our colleagues,” the ministry continued.

Lavrov also reminded Blinken that the actions violating the commitments of indivisible security in the Euro-Atlantic region undertaken at the highest level were inadmissible, according to the statement.

Ahead of the conversation, Blinken repeated US talking points about Russia’s alleged aggressive designs on Ukraine, and claims made by American officials for months on end now that Russia may invade “at any time”.

State Department Spokesman Ned Price issued a statement later Saturday outlining the US account of the conversation between Lavrov and Blinken, saying the two men discussed “acute and shared concerns that Russia may be considering launching further military aggression against Ukraine in the coming days.”

“The Secretary made clear that a diplomatic path to resolving the crisis remained open, but would require Moscow to deescalate and engage in good-faith discussions. He reiterated that should Moscow pursue the path of aggression and further invade Ukraine, it would result in a resolute, massive, and united Transatlantic response,” Price added.

Lavrov and Blinken spoke by phone on Saturday at the request of the US side, TASS news agency reported.

The talks are expected to be followed up by a telephone conversation between Presidents Vladimir Putin and Joe Biden later in the day.

The White House has announced that Biden was also scheduled to hold a telephone call with a number of allies, including with the leaders of Germany and France as well as with the NATO and EU chiefs, to discuss the situation in Ukraine and tensions with Russia.

On Saturday, Russian Foreign Ministry Spokeswoman Maria Zakharova said in a statement Moscow has made a decision to optimize the staff of its diplomatic missions in Ukraine amid possible provocations from the Kiev regime or third countries.

“In this situation, in the wake of possible provocations by the Kiev regime or third countries, we have, indeed, made a decision on some optimization of the staff of Russian overseas missions in Ukraine. We want to highlight that our embassy and consulates will keep performing their basic functions,” Zakharova added.

“Considering the substantial influence that Washington and London have on Kiev and, generally, their role in governing the processes in Ukraine – let us just mention the efforts of beefing it up with weapons and instructors – we can make a conclusion that our American and British colleagues, apparently, know about some violent acts being prepared in Ukraine that can considerably complicate the security situation,” Zakharova stressed.

The move came after the US, Britain, and several other countries began to evacuate some staffers and family members from their embassies in Kiev. Washington has also ordered the evacuation of non-emergency personnel from its embassy in Kiev on Saturday. The White House has also advised Americans not to travel to Ukraine and urged American nationals to leave the country without delay.

The West and Kiev have recently been spreading allegations about Russia’s potential ‘invasion’ of Ukraine. Kremlin Spokesman Dmitry Peskov castigated these claims as “empty and unfounded,” serving as a ploy to escalate tensions, pointing out that Russia did not pose any threat whatsoever to anyone. However, Peskov did not rule out the possibility of provocations aimed at justifying such allegations and warned that attempts to use military force to resolve the crisis in southeastern Ukraine would have very serious consequences.

Al Jazeera’s Step Vaessen, reporting from near an airfield in southern Belarus close to the Ukrainian border, said Russian military exercises appear to be taking place at the site.

“We have seen dozens of Russian trucks coming out of the airfield around half an hour ago. There is military activity here for sure – we’ve heard helicopters taking off, we’ve heard what seem to be shooting exercises,” she stated.

“On the other hand, it’s also quite calm here in this area. In the village nearby everything is ordinary and people are going about their normal business,” she continued.

Over 30 Russian ships have left the ports of Sevastopol and Novorossiisk “in accordance to the plans of the drills” near Crimea.

The aim of the drills was the defence of the coast of Crimea, the outposts of the Black Sea fleet as well as the economy and naval communications, the news agency reported.

On Saturday, Ukraine urged its citizens to keep calm and avoid panicking in the face of mounting worries that Russia was preparing to invade.

“At the moment, it is critically important to remain calm, to consolidate inside the country, to avoid destabilising actions and those that sow panic,” the foreign ministry said in a statement.

“The armed force of Ukraine are constantly monitoring the situation and are ready to rebuff any encroachment on its territorial integrity and sovereignty,” it added.

Secretary of Defense Lloyd Austin has also ordered US troops who deployed to Ukraine last year to leave the country and reposition elsewhere in Europe.

“Secretary Austin has ordered the temporary repositioning of the 160 members of the Florida National Guard who have been deployed to Ukraine since late November,” the Pentagon said in a statement.

These troops, which have been “advising and mentoring Ukrainian forces,” will now “reposition elsewhere in Europe,” the statement added.

On Saturday, Austin discussed Russia’s military presence near the Ukrainian border in a phone call with Russian Minister of Defense Sergei Shoigu.

Western media outlets have predicted yet another date for the supposedly looming ‘Russian invasion of Ukraine’, this time claiming it could start next Wednesday.

Also on Friday, White House National Security Advisor Jake Sullivan told reporters that a Russian assault on Ukraine will likely begin with aerial bombing and missile strikes, followed by a ground invasion of “a massive force.”

Russian ambassador to the US, Anatoly Antonov, has rejected Washington warnings that Moscow is planning to invade Ukraine, and accused the US of spreading “alarmism” without any evidence.

The statements in Washington show the US has intensified its “propaganda campaign against our country”, and wants to create the impression that aggression is “inevitable”, he added.