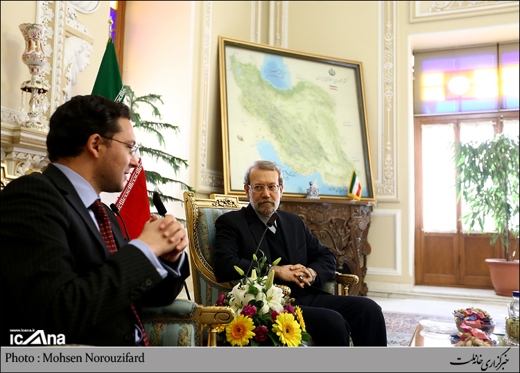 The downing of a Russian fighter jet and a recent military attack of the Zionist regime against Damascus will promote warmongering in the region, Larijani told the Bulgarian top diplomat.

Parliament Speaker Ali Larijani said on Monday that the recent decision made by the US Congress to tighten travel rules for those who visit Iran will harm the nuclear deal signed between Iran and P5+1 and is against the content of the agreement.

Larijani made the remarks in a meeting with visiting Bulgarian Foreign Minister Daniel Mitov in Tehran on Monday.

In two or three weeks, the Joint Comprehensive Plan of Action (JCPOA) will be implemented and economic relations between Iran and Bulgaria will be boosted considerably, he said.

Double standards adopted by a very limited number of countries have enabled terrorist groups to creep into countries such as France to carry out sabotage operations, he said.

Referring to the ongoing crises in countries such as Syria and Yemen, he said complete destruction of terrorists via political negotiations sound impossible and these problems will be resolved through security means.

The downing of a Russian fighter jet [by Turkey] and the recent military attack of the Zionist regime against Damascus will promote warmongering in the region, Larijani said.

The Bulgarian foreign minister, for his part, said during his visit to Tehran he held very positive talks with the Iranian officials leading to expansion of cultural, commercial, tourism and sporting events in both countries.

Bulgaria is ready to invest in Iran’s natural gas to transfer it to Europe, he said.

Bulgaria seeks the destruction of terrorist groups as their presence will create international challenges which should be removed at the earliest, said the Bulgarian top diplomat.

Air raid is not enough to quell terrorist groups and other measures should be taken in this regard, he said.

The West and the European Union could play leading role in fight with terrorists, he said adding that the role of regional countries should be heeded in such fight.

Syrian people wish to make a decision on their fate and all should help them establish democracy in the war-torn country, he said.

Bulgaria believes that ceasefire should be established in Syria as soon as possible to help the country reorganize itself, said Bulgarian foreign minister.

He also said he wished the US Congress revised its decision on visa for travelers visiting Iran and by doing so helped implement the Joint Comprehensive Plan of Action (JCPOA).