Kayhan Editorial: Iran Should Close Straits of Hormuz in Response to US Asset Seizure 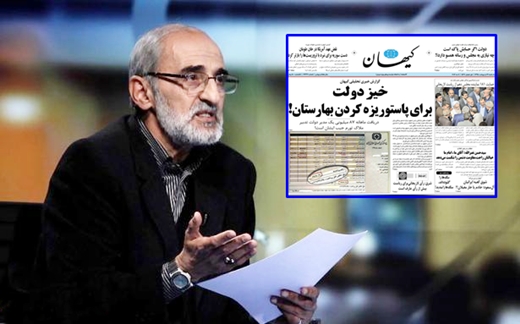 In an editorial in Kayhan newspaper, Hossein Shariatmadari argues that Iranian officials should shut the strategic Straits of Hormuz, a major route for the transit of oil tankers from the Middle East, as a response to a recent US court ruling that confiscated nearly $2bn of Iran’s frozen assets.

Here is IFP’s translation of the editorial published on Sunday.

Why does the United States violate all internationally-recognized legal norms and regulations – which must be observed by all UN member states, including the US – in snaffling $2bn of Iran’s assets so easily? Based on reliable reports, Washington already has made plans to confiscate another $50bn of Iran’s frozen assets.

Is filing a lawsuit in The Hague or asking for the help of UN and other international organizations the only ways to counter this thievery? Isn’t this the very same ineffective way in which the Iranian administration has been acting? The government does not seem willing to change the method, but still expects it to work. The following article is a response to the strategic questions.

1- It is an unwritten, yet accepted, rule in politics that, “When the enemy talks too much, one can conclude that its options are limited.” In other words, when the enemy sees a huge gap between its “actual power” and the power it “needs” to impose its demands on the other side, it resorts to boasting and exaggerating its capabilities so as to intimidate the other party, trying to make it surrender and stop resisting.

Daniel Lerner, in his famous book The Passing of Traditional Society, notes that psychological operations should be designed and implemented in a way which changes the opponent’s perception of events. These operations should spread the idea to the opposition’s think tanks that resistance is futile and expensive, in order that they decrease their demands. These demands, having been minimized, are then only met by accepting the original offer from the first side [thus gaining an advantage in negotiations].

2- With sadness, we should make it known that the US and its allies have received signals of weakness and desperation from the Iranian administration over the past three years. They are now confident – of course, unrealistically – that Iran has surrendered under the sanctions, and has backed off from some of its revolutionary principles and teachings. As a single example, notice the way in which a French radio station interpreted the way President Hassan Rouhani’s government behaved on October 11, 2013, a few months after he was sworn in:

The West’s evaluation of the current situation in Rouhani’s government is to see it as an interaction with an indebted and enthusiastic salesman, who feels obliged to sell national privileges. Based on this, the purchaser’s patience will make it more difficult for the salesman, reducing the sale price. An offer by Rouhani to set a three-month deadline for a lasting deal with the West indicates the emergency in which the Iranian President finds himself, thus appearing in Geneva as the salesman.

The US and its allies perceive the President to be an “indebted salesman who is obliged to sell his national interests”. So what reaction do you think they would show towards Islamic Iran? An overview – even a brief one – of what happened during the past three years in the course of Iran’s nuclear negotiations with the Group 5+1 [Russia, China, the US, Britain, France, and Germany] and the events that took place after the deal’s implementation clearly indicates that the US and its allies have been designing and pursuing “nuclear deal inequality,” based on the abovementioned interpretation.

3- The US then must conclude, based on repeated remarks by the President and some of his partners, that Iran’s back has been broken under sanctions, and that even Iranian drinking water hinges on the nuclear deal and the termination of sanctions. They also considered our President as a “desperate and hopeless debtor” who is in a hurry to “sell his country’s national interests” to get out of trouble. Considering these, one can guess that they would then make two hostile, parallel moves in their fight against the Islamic Republic of Iran, who they see as a real, powerful enemy.

Firstly, the US, which was sure about the effectiveness of sanctions and confident that Rouhani’s government considered the termination of sanctions as the only solution and path to economic growth, reached the conclusion that it should never make any change in the system of sanctions. This was what Washington had already done: It had not only refused to lift the sanctions, but it also added fresh sanctions to the previous ones.

Secondly, having received the signal of desperation from the government, or “the indebted salesman who feels obliged to sell national interests”, they would reduce the price as much as possible; something that they have already done. In return, they would give certain promises “on credit”, and then break these promises one by one. Isn’t this true?

This is not over, and it will not end here. Not only has the US failed to keep its promises, but also it has taken other aggressive moves against the Islamic Republic. The recent seizure of nearly $2bn of Iran’s frozen assets is one of them, and it definitely will not be the last one.

4- Should the government continue its current policies? Wouldn’t they lead to further US damage to the Islamic Republic of Iran? A thoughtful mind or secret and classified information is not needed to answer this question. It can be clearly seen that the US will spare no effort to harm Iran and its people. We have learned that we cannot trust any of their promises.

Therefore, only two paths remain, and we cannot think of a third one. First, we could do nothing, and just accept the robbery of our country’s assets, which will continue up to $50bn. On this path, we should expect more hostile moves from America, as it has repeatedly and publicly announced that it pursues a strategic goal of the overthrow of the Islamic Republic. The second way is to use the leverage we have, and seriously endanger their vital interests in a bid to counter their bullying. Imam Ali is quoted as saying that one should respond to the stones the opponent has thrown in the same way.

5- The Straits of Hormuz are the most effective way, indeed the only one, to progress in this regard. Hormuz is the world’s second-busiest strait in terms of daily traffic. The tankers passing through there, out of the Persian Gulf, carry an average of 18 million barrels of crude oil per day. This is said to represent 42% of the world’s seaborne oil shipments. According to the Convention on the Territorial Sea and the Contiguous Zone (Geneva, 1958) and the United Nations Convention on the Law of the Sea (Jamaica, 1982), Iran has the right to shut the Strait of Hormuz to all oil tankers and even merchant ships and ones carrying weapons if it feels its national interests are in danger. Under such circumstances, there is no reason that hostile countries would be allowed to pass out of a strait located in Iran’s territorial waters.

The fourth paragraph of Article 194 in the Convention on the Territorial Sea and the Contiguous Zone stresses that “Passage is innocent so long as it is not prejudicial to the peace, good order or security of the coastal State.”

Also the first paragraph of Article 16 in the same convention states that “The coastal State [in this case, Iran] may take the necessary steps in its territorial sea to prevent passage which is not innocent.”

According to Article 16 of the Geneva Convention and Article 37 of the Jamaica Convention, “The coastal State may, without discrimination amongst foreign ships, suspend temporarily in specified areas of its territorial sea the innocent passage of foreign ships if such suspension is essential for the protection of its security. Such suspension shall take effect only after having been duly published.”

As mentioned above, it is Iran’s basic and legal right to close the Strait of Hormuz to such countries as the US and certain European countries, and we should not hesitate even for a moment in using our legal rights to prevent the plunder of our country’s assets and reclaim the $2bn stolen from us. We should be confident that the US can do nothing wrong… Otherwise, in addition to the concessions we have given in the inequality of the JCPOA (nuclear deal) […], we should expect the robbery of all our frozen assets and tens of other hostile moves by the US against our nation.

Iranian officials should be confident that the entire nation will support any move against the banditry and crimes committed by the US. Therefore, we shouldn’t let the dogs be unleashed while the stones are tied up! [an untranslatable play on words, meaning that you can only have control of a situation via the existence of a threat]

‘Enough Is Enough: Iran Won’t Give US More Concessions’

“EU Seeking to Deceive Iran into Accepting US Demands”