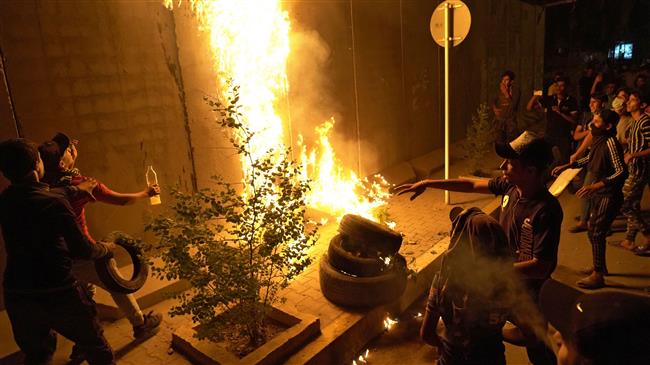 Heads of tribes in Karbala have apologized to the Iranian nation and government over a recent attack against the Islamic Republic’s consulate in the holy Iraqi city.

The tribal leaders met with Iran’s Consul General in Karbala Mir-Masoud Hosseinian on Wednesday and offered their apology for Sunday’s raid by a group of assailants on the Iranian diplomatic mission.

They said the attackers could not disrupt brotherly and strong relations between the Iranians and the people of Karbala, adding that Tehran has stood with the Iraqis during difficult times.

Hosseinian, for his part, stressed that the incident would not affect Baghdad-Tehran ties and expressed hope that the Iraq unrest would end soon.

Some other demonstrators also threw stones and burned tires around the Iranian consulate building, prompting Iraqi security forces to fire in the air to disperse the crowd.

Local sources said an Iraqi element affiliated to the Ba’ath Party has been arrested over the attack, but there has been no confirmation from Iraqi officials.

In another development on Wednesday, a spokesman for Iraqi Prime Minister Adil Abdul-Mahdi said the blocking of Iraq’s major Um Qasr port by anti-government protesters has cost the Arab country over $6 billion so far.

“Iraq has lost more than 6$ billion due to closure of Umm Qasr port, after protesters blocked all the roads that leads to the port,” Major General Abdul Karim Khalaf said at a press conference. “Blocking the roads and bridges will only harm the Iraqi economy.”

He further warned that Iraqi security forces will “immediately arrest any protester or individual who blocks the roads and bridges from now on, as we will also make sure not to let anyone to get close to the ports and the oil fields.”

Khalaf also said that security forces had been ordered not to use live fire on demonstrators.

“To avoid any confusion, clear and strict instructions have been handed down that no live ammunition be used. Orders have also been given not allow any live ammunition on the scene [of protests],” he said.

At the start of October, street protests erupted in several Iraqi cities over unemployment and a lack of basic services.

The rallies resumed on October 25 after a pause of about two weeks, but took a violent turn. Over 150 people lost their lives in the first round, according to official figures.

The United Nations estimates that as of November 4 at least 254 people were killed and thousands more wounded during Iraq protests.