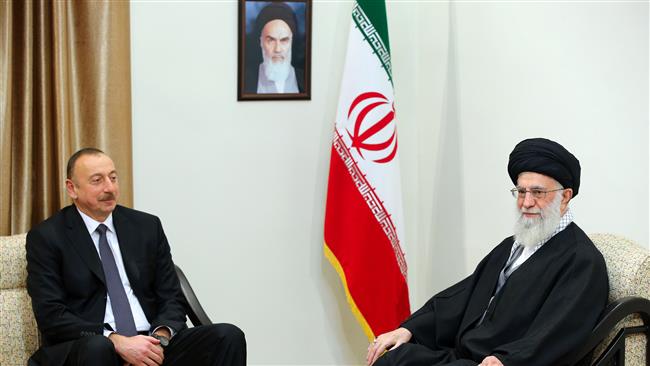 Leader of the Islamic Revolution Ayatollah Seyyed Ali Khamenei says enemies are irked by close relations between Iran and Azerbaijan, warning of the Israeli regime’s efforts to undermine the two countries' mutual ties.

“The evil Zionist regime [of Israel] is making efforts more than all enemies to weaken the brotherly relations between Iran and Azerbaijan,” the Leader said in a meeting with the visiting Azeri President Ilham Aliyev in Tehran on Sunday.

Ayatollah Khamenei added that in response to enemies’ plots, Tehran and Baku must try to protect their friendly relations.

The Leader hailed Azerbaijan’s very positive stances on the Islamic Republic, including its position on the Iranian nuclear issue.

“In political circles and communities, the Azeri government has always stood by Iran and these positive stances bring the two countries closer than ever to each other,” Ayatollah Khamenei stated.

During the meeting, which was attended by Iranian President Hassan Rouhani, Aliyev said Tehran and Baku enjoy cultural, historical and religious commonalities.

Despite efforts to sow discord between Iran and Azerbaijan, the two countries have high-level relations and the enemies bids to undermine such ties would be futile, he added.

The Azeri president said Tehran and Baku signed 20 documents for cooperation in 2016, adding that the volume of trade exchanges showed a 70-percent increase in comparison with the previous year.

Aliyev, however, expressed dissatisfaction with the current volume of trade exchanges and said the two countries are implementing joint projects, including a railway link.

The Iranian and Azeri presidents signed an agreement in Tehran on Sunday to work toward completing their portions of a planned freight railway route from Europe to South Asia and also agreed to link the two countries’ rail systems.

The Azeri president arrived in Tehran for a one-day visit on Sunday and attended a joint press conference with his Iranian counterpart earlier in the day.