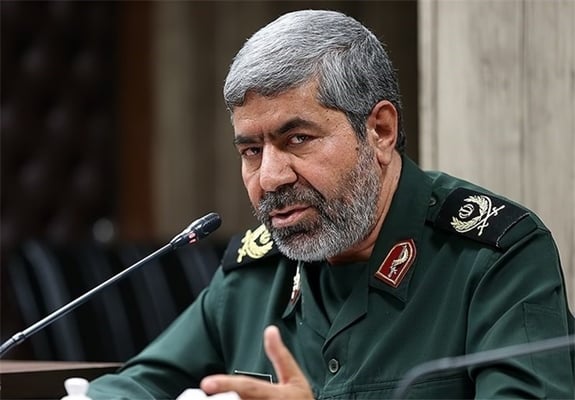 Spokesman for the Islamic Revolution Guards Corps Brigadier General Ramezan Sharif says Tel Aviv is experiencing its worst defence condition, and the IRGC is completely ready to respond to any threat by the Zionist regime.

In an address on Saturday, General Sharif said today the Middle East is undergoing a very sensitive situation due to the latest developments unfolding in the occupied lands.

“On the one hand, the US and its major ally in the region, Israel is pressing ahead with their plot to relocate the US embassy from Tel Aviv to Jerusalem al-Quds and on the other hand, the victories achieved by the Resistance Front in the region as well as the heavy defeat of ISIS and its sponsors have put the Zionist regime in its worst defence and psychological situation,” he was quoted as saying by Persian-language Khabar Online website.

Elsewhere in his remarks, the IRGC spokesman said the western and Zionist media emperors have sought to distract the world’s public opinion from the violence underway in the occupied lands.

The International Quds Day provides Muslim states with a good opportunity each year to remind the world of the crimes committed by the Zionist regime against the oppressed nation of Palestine, he added.

International Quds day held annually on the last Friday of the holy month of Ramadan in Islamic calendar year was initiated by the Islamic Republic of Iran back in 1979 to express support for the Palestinians.

The IRGC spokesman also said the Palestinian fight against the Zionist regime has gained momentum with the emergence of the third and fourth generations of Palestinians.

He blasted some regional states for putting their weight behind the US interferences in the regional developments and said such states have created divisions in the Muslim world.

“The Islamic Republic has been under pressure from the US and its regional allies for its leading role in fight against terrorism in the region. So, the country deems strengthening its defence capabilities as a deterrent measure against the pressure,” he noted.