ISIS Would Have Taken All of Syria If Iran Hadn’t Helped Damascus: General Soleimani 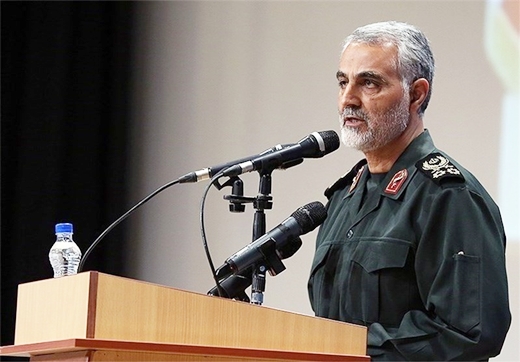 The Commander of the Islamic Revolution Guards Corps (IRGC) Quds Force, Major General Qassem Soleimani, commented on Tehran’s assistance to the Syrian government in the ongoing war, stressing that Damascus would have fallen if it was not for Iran’s help.

Here’s IFP’s translation of excerpts from General Soleimani’s Monday May 23 remarks, as reported by Tasnim.

“Today, the Islamic Republic is on the winning side in the battle against Takfiris [radical Islamic terrorists], and we are witnessing their defeat,” General Soleimani said in an address to seminary teachers and students in Qom.

“If the Islamic Republic had refused to help the Syrian government resistance, Daesh [also known as ISIS and ISIL] would be ruling the entire country today.”

He further talked about US attempts to foster sectarian wars with the aim of defeating Iran, and stressed that Washington is now being forced to withdraw from all its targets.

“In spite of all US pressure, Sunnis, Shiites, and the Kurds of Iraq are now in favour of Iran, and are proud of their friendship with Tehran,” General Soleimani added.

“Today, the Islamic Republic is definitely the victor in all regional fields; of course we have played minor roles in certain fields, but the enemy has been defeated even in those, due to its incorrect ideas.”

The IRGC general also pointed to the ongoing war in Yemen, stating that the enemy’s “arrogant war” has led to their own defeat.

“The result of the Yemen war is the stabilization of [Houthi] Ansarullah’s power,” he said.