IRGC Chief Assures No Iranian Drone Downed by US 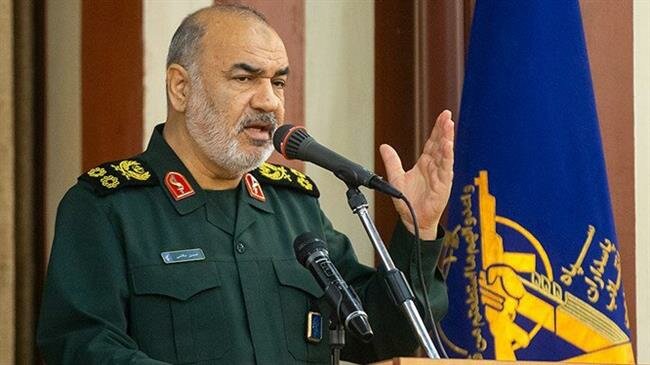 The chief commander of the Islamic Revolution Guards Corps (IRGC) has roundly dismissed as a "big lie" American officials’ claims that US forces may have downed more than one Iranian drone over the Persian Gulf, emphasizing that the Islamic Republic has not lost any unmanned aerial vehicle.

“I, hereby, announce officially that no drone belonging to the Islamic Republic of Iran has been shot down,” Major General Hossein Salami told reporters in the western Iranian city of Khorramabad on Wednesday afternoon.

He went on to say that an Iranian drone was on a reconnaissance mission in the skies over Persian Gulf waters for three hours and 40 minutes, underlining that the aircraft sent images and videos of regional and transregional vessels – some of which were broadcast to enlighten the Iranian and world public opinions.

Salami then challenged the US to offer convincing proof for its claim of shooting down the Iranian drown, saying, “Today, the world would not believe unsubstantiated remarks.”

“Enemies should present the Iranian-made parts of the drone and substantiate their claims. Otherwise, no one would believe their spurious allegations,” the top IRGC commander said.

“I state it unequivocally: This is a big lie and we have proved it false. Enemies should provide evidence for their claims, because we have validated what we have already done. They (enemies) should do the same,” he added.

The remarks came in reaction to remarks by a US general who claimed the US forces took action against a second Iranian drone in the Strait of Hormuz last week, but did not see the drone go into the water.

“We’re confident we brought down one drone; we may have brought down a second,” CENTCOM Commander Gen. Kenneth McKenzie said on Tuesday, while failing to procure any evidence for bringing down the first one despite claiming to be in possession of its footage.

Moving between the Persian Gulf and the Gulf of Oman, the USS Boxer is said to have used electronic measures to take down a drone, which Washington claims was being operated by Iran.

“We believe two drones were successfully engaged,” McKenzie claimed, speaking aboard the USS Boxer amphibious assault ship. “There may have been more that, you know, we’re not aware of. Those are the two that we engaged successfully.”

US President Donald Trump announced on July 18 that the USS Boxer downed an Iranian drone that came within 1,000 yards of the Navy ship and ignored “multiple calls to stand down.”

A few hours after Trump’s allegation, Iran moved to reject his claim with Iranian Deputy Foreign Minister Abbas Araqchi saying in a tweet that “We have not lost any drone in the Strait of Hormuz nor anywhere else.”

The IRGC has also released footage captured by an Iranian drone flying over the Strait of Hormuz and monitoring a US Navy vessel, belying the claim.

“None of our drones has been shot down, and they are carrying out their regular missions. We showed the body of the [US] drone that we brought down. If anyone claims to have brought down our drone, prove it. No drone from the Islamic Republic of Iran has been brought down,” Hatami said.

Tensions in the Persian Gulf region have intensified recently, where Washington has sent an aircraft carrier and B-52 long-range bombers in a show of force against Iran.

The US deployment came after a series of attacks since mid-May on tankers around the Strait of Hormuz, the world’s most important oil artery. Washington blames Tehran for the attacks. Iran roundly rejects the allegations, saying its has even come to the rescue of vessels requesting help in the Persian Gulf.