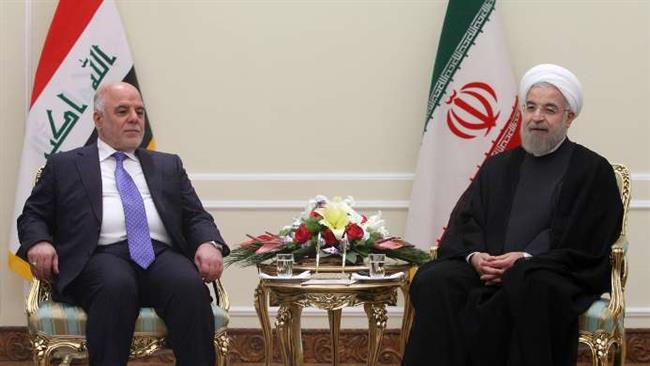 President Rouhani has said that the people and government of Iran have been and will continue to be beside the government and nation of Iraq, adding Iraq's security is intertwined with that of Iran.

Iranian President Hassan Rouhani says the Islamic Republic will continue supporting Iraq in its fight against terrorism, noting that the country’s security is intertwined with that of Iran.

“The main responsibility for combating terrorism and finally defeating it falls undoubtedly on the shoulders of the Iraqi nation and army,” President Rouhani said in a meeting with Iraqi Prime Minister Haider al-Abadi in the Iranian capital of Tehran on Wednesday.

“Nevertheless, the people and government of Iran have been and will continue to be beside the government and nation of Iraq,” the Iranian president emphasized.

Stability, security, and peace in Iraq and Iran’s other neighbors can help progress and development in the region, the Iranian president added.

Referring to attempts by some countries to sow discord among Iraqi people to achieve their short-term interests, he said Iraq should make an all-out effort to strengthen national unity to counter the enemies’ plans.

Abadi, for his part, hailed the Islamic Republic’s friendly support for Iraq in its anti-terror efforts and said the continuation of Tehran’s assistance to Baghdad will eventuate in the eradication of the ISIL terrorist group both in Iraq and the Middle East.

The Iraqi premier also called for the expansion of trade and cultural ties with Iran.

During his meeting with Jahangiri, Abadi said that Tehran and Baghdad must create a “united front for battling terrorism.”

Acts of violence by ISIL have plagued Iraq since the terrorist group seized some parts of the Arab country in June 2014.

The Iraqi army, joined by volunteer fighters, has engaged in various military operations to flush the ISIL terrorists out of the areas they have under control, and has so far made some advances, including liberating the strategic city of Tikrit in the north.