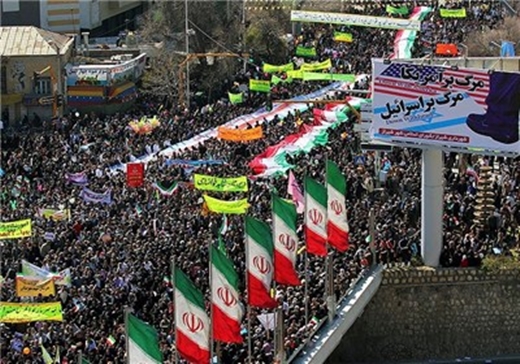 The higher turnout in the demonstration, the better the world will get the message of Iran’s “national solidarity,” said President Rouhani.

Iranian President Hassan Rouhani called for massive presence in the upcoming nationwide demonstrations to mark the anniversary of victory of the Islamic Revolution, which falls on February 11.

The higher turnout in the demonstration, the better the world will get the message of Iran’s “national solidarity,” President Rouhani said on Monday.

He noted that the “ill-wishers and enemies” of Iran will better feel the Iranian nation’s power in the form of mass rallies during the national celebration.

President Rouhani also described the February 11 rallies as a factor that will help the country better deal with the economic woes and help manage the nuclear talks with world powers.

Massive turnout in the demonstration enables Iran to “encounter those who make excessive demands with more power on all international issues and to defend the Iranian nation’s right in an easier and less costly manner,” he added.

In relevant comments on Sunday, Supreme Leader of the Islamic Revolution Ayatollah Seyyed Ali Khamenei predicted a huge turnout in the upcoming demonstration, noting that the mass rallies will indicate that the Iranian nation is not constrained.

The Iranian nation toppled the US-backed Pahlavi regime 35 years ago, on February 11, 1979, ending the 2,500 years of monarchic rule in the country.

The revolution, spearheaded by the late Imam Khomeini, established a new political system based on Islamic values and democracy.