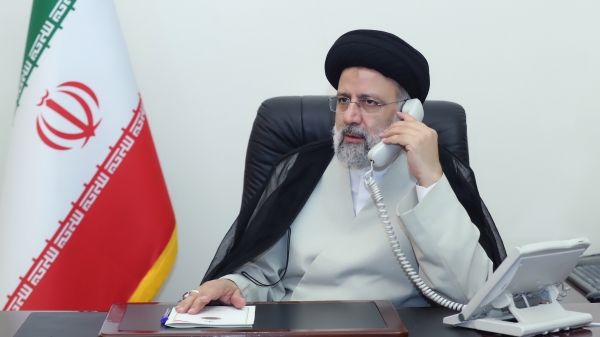 Iran’s President Ebrahim Raisi has called on China to facilitate the delivery of the Covid-19 vaccines to the Islamic Republic as soon as possible.

Raisi made the remarks during a phone conversation with his Chinese counterpart Xi Jinping on Wednesday.

He also hailed China’s constructive role in fight against the Coronavirus, particularly its assistance in providing a large number of countries with vaccines.

doses of vaccines that are purchased.”
Emphasizing the need for joint cooperation in the fight against the coronavirus, Raisi reiterated that the politicization of the Covid 19 epidemic is a serious threat to global health and is an example of some countries’ efforts to isolate China.

Elsewhere in his remarks Raisi stated that the decision of the Islamic Republic of Iran is to develop and strengthen strategic relations with China, adding that upgrading the level of cooperation and expanding relations with China is the priority of the Iranian government’s foreign policy.

He also noted China’s strategic plans, such as the “One Belt, One Road” plan, are in line with Iran’s interests stressing that the full implementation of the Iran-China comprehensive cooperation plan should be on the agenda of all organizations of the two countries.

Furthermore, Raisi added that the Islamic Republic of Iran, with full support for the principle of a united China, condemns the blatant interference of the United States in the internal affairs of this country.

Appreciating China’s strategic stance on unilateralism, Raisi thanked China for its cooperation with Iran in various international arenas, including the protection of nuclear rights, Iran’s membership in the Shanghai Agreement, and its opposition to sanctions against the Islamic Republic.

In another part of his statements, Raisi referred to Iran’s adherence to international treaties and criticized the US instrumental view of these treaties.

The United States must show in practice that it adheres to its commitments and to do so Washington must abandon breaching the treaties in practice, lift all sanctions, and fulfill its commitments immediately and unconditionally, he underlined.

He also stated that the Islamic Republic of Iran is ready to cooperate with China in establishing security, stability and peace in Afghanistan.

“The departure of foreigners, as well as past experiences in this country, has highlighted the need for the support and participation of all Afghan currents to ensure the security and development of Afghanistan more than ever.”

For his part, Chinese President Xi Jinping also expressed satisfaction with the fact that relations between the two countries have been expanding over the past 50 years, regardless of changing international conditions.

He added that the ties between the two countries, especially after the Comprehensive Strategic Partnership between Iran and China, have had significant results and achievements.

While appreciating Iran’s support for China’s fundamental interests, the Chinese president said his country’s support for Iran’s formal membership in the Shanghai Cooperation Organization was in the long-term interest of the organization.

He also praised the constructive cooperation between Tehran and Beijing during the Corona epidemic, saying that China will do its utmost to deliver the vaccines to Iran and help Iran overcome the Covid-19 pandemic.

The Chinese president praised Iran’s support for China over the origin of the coronavirus, saying that some Western countries have resorted to political games under the pretext of fining the root of the spread of the coronavirus.

Xi Jinping Welcomed the participation of the Iranian side in the “One Belt, One Road” initiative, announcing that Beijing is ready to strengthen cooperation with Tehran in this regard.

Elsewhere in his statements, he stated that the United States has unilaterally withdrawn from the Joint Comprehensive Plan of Action and exerted maximum pressure on Iran, saying that this issue is the main cause of the current nuclear crisis and China supports Iran’s reasonable demands.

In the end, regarding Afghanistan, Xi Jinping noted that China and Iran have common interests and demands in this issue and have had good cooperation in recent years, adding that in the new situation, China is ready to strengthen coordination and cooperation.