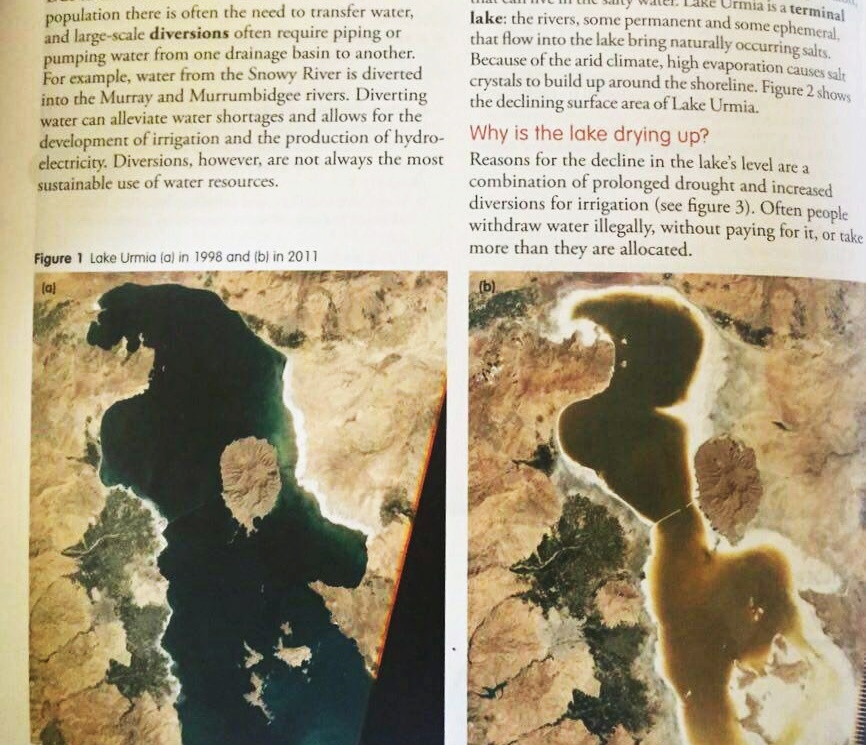 The shrinking Lake Urmia in northwestern Iran has become a subject of geography book in Australian high schools to discuss the issue of water transfer and its harmful consequences.

According to a report by Vaghaye Ettefaghieh newspaper, as translated by IFP, Lake Urmia, the world`s largest salt lake, is dying. Meanwhile, some experts believe that Iran`s largest lake can be saved if the locals are trained for sustainable use of water resources in agriculture.

Now “the drying of Lake Urmia” has turned to the subject of geography lessons in Australian high schools to discuss the issue of water transfer and its harmful effects. In Geography textbook of 10th year in Australia, Lake Urmia is presented as an example for failure to save the world`s wetlands and lakes.

The textbook has referred to Ramsar Convention, an international treaty for the conservation and sustainable use of wetlands signed in February 1971. Although the Convention was signed in Ramsar, Iran, it has not been respected in our country.

It is written in the textbook, “Lake Urmia, one of largest lakes of Middle East and the world`s largest salt lake, is drying up. This lake, located in Iran`s northwest, had lost about 65% of its surface water in 2005, and started to dry off. It is said that the need to conserve its rich ecosystem led the international community to create Ramsar Convention for the conservation of wetlands in 1971. As the most important and the only convention to control the conservation of wetlands, this treaty commits all contracting parties, including Iran, to reasonable use of wetlands. Despite the treaty, Lake Urmia, as one of most important Iranian wetlands recorded in Ramsar Convention, has faced the drying crisis. The reasons include: implementing developmental projects such as constructing Shahid Kalantari highway on the lake, and building dams on the lake`s rivers.”

“Lake Urmia and its surrounding grounds are the seasonal habitat of migratory birds who feed their selves with the lake`s Artemia. Artemia is a species of crustaceans and the only living creature of Lake Urmia, who can live in dense, salty waters and eats the lake`s algae. Artemia is the main food of migratory birds, being the biggest source of nutrition for sturgeons,” the book added.

“After planktons, Artemias are more likely to live in salty waters. According to experts, salt crystals are formed around the lake`s shore because of dry climate and excessive vaporization. Scientists have pointed at the drought and the increasing capture and transfer of the lake`s water as well as illegal water capture by people as the main reasons for the lake`s dryness,” the textbook went on to say.

The latest status of Lake Urmia

Latest studies show that the water level of Lake Urmia has risen; however, the cut of Lake Urmia Restoration Program`s budget poses many new challenges to the project.

“The water volume is twice as much as last year; the water surface shows a growth of 50%, and the level has risen as much as 40cm; it is not promising, though,” stated Massoud Tajrishi, the Director of Lake Urmia Restoration Program`s Planning and Integration Office.

“We intend to increase the lake`s water level for 40cm by next September; it depends on the implementation of some projects and provision of the required budget. Because of government`s financial problems, we had to cut the budget of program last year and reduce it to $465 million,” he added.

“Three sources are due to provide this money: National Development Fund of Iran which supplies us with about $93 million, the Annual Budget of Executive Organizations, which is about $82 million – we have no problem with these two; however, a sum of about $301 million was due to be allocated for a lot of our projects according to the 10th and 12th articles of the Law of Partial Regulation of Government’s Finances and the Law of Formation of National Disaster Management Organisation.”

“The government agreed to pay over $82 million. We discussed it with the Management and Planning Organisation in several sessions; finally we had to omit some projects and give priority to the ones that required less time and money and were more effective. But, unfortunately, no money has been injected by this sector till now,” he added.

“There were important projects; for example we should plant Nitraria in large areas and it required major irrigation. The Organization of Forest, Range and Watershed Management cooperated with us, but we couldn`t pay their wage to make them able for paying contractors` money; we have no funding for our dust control project, and the dredging projects are halfway.”

Besides noticing the Lake Urmia in their textbooks, Australians came to Iran last September to help the conservation of lake through their research.

“We have decided to build a common water controlling centre in cooperation with Melbourne University,” announced a member of the Australian board researching about Lake Urmia restoration.

“I believe that we have complicated problems. In Australia, we learned to progress slowly, because we faced problems every time we speeded up. It is important to have a good, even if slow, perspective,” said Michael Stewardson, the Head of Department of Aquatic and Environmental Hydrology at the University of Melbourne, about the slow process of the lake`s restoration.

“In our visit to Lake Urmia, we observed some executive initiatives by Iranian government, concluding that we are going to have great successes in restoration of the lake,” he confirmed.

“It is complicated because we have seven million people and an agricultural system that uses too much water. It should change,” stated Peter Scales, the Dean of University of Melbourne’s Infrastructure School.

People should change, not the lake

“If we persuade people that water is part of the environment, farmers will use less water and industries will leave a healthier water. People should change, not the lake. I can accept that Lake Urmia`s situation will change, but not before changing public opinion about using the lake`s water,” added Scales.

He believes that the solutions include considering incentives for people who use the water properly, and convincing them that the change is good for them, “It is hard to find the first group of people, but then everything will change very quickly.”

“We have been very active in managing our water resources in Australia; for example, we announced that the optimal duration of bathing is four minutes. We give hourglasses to school children to be used when taking bath, so that they know the duration of their bathing.”

“When we receive our water bills, we can see the individual, regional and urban amount of consumption. As a result, everyone learns how much water one uses,” he added.

“I hope that we establish a joint centre for water studies as soon as possible in cooperation with Sharif University of Technology and the Lake Urmia Restoration Program,” he went on to say.