Iran’s Javad Zarif on Russia and Peace in Syria 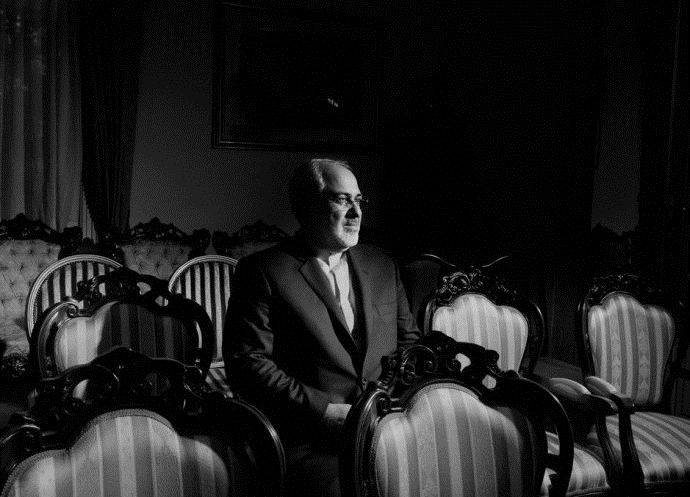 The Russians ultimately want the US should have wanted from the bombing campaign in Syria and that is to destroy IS, said the Iranian foreign minister.

The New Yorker Magazine’s Robin Wright conducted a wide-ranging interview with Foreign Minister Zarif, with a focus on Syria, before his return home from New York where he attended the UN General Assembly. The following is what the world-famous magazine’s website published on October 6 on Wright’s interview with the Iranian top diplomat:

Iran’s foreign minister, Mohammad Javad Zarif, is in demand these days. On the sidelines of the U.N. General Assembly, he shook hands with President Obama and met twice with Secretary of State John Kerry. (Zarif and Kerry have been nominated, jointly, for the Nobel Peace Prize, scheduled to be announced this week, for their two-year negotiations on the Iran nuclear deal.) Zarif hosted both Republican and Democratic officials from previous U.S. Administrations, breakfasted with editors, huddled with American nuclear experts, and briefed the Times editorial board. He also squeezed in a session with the University of Denver, his alma mater; the event was streamed live from the Waldorf-Astoria, because Iranian diplomats are not allowed to travel beyond a twenty-five-mile zone around New York.

The day before Zarif returned to Tehran, I spoke with him at the residence of Iran’s U.N. ambassador, on Fifth Avenue, near the Metropolitan Museum. The interview has been condensed and edited for clarity.

Did you know that Obama was going to come up and shake your hand?

No. It’s not customary for a head of state to plan shaking hands with a foreign minister. That’s even an insult for a head of state to plan. Obama had spoken to the General Assembly two hours earlier, and we did not expect him to be back in the Assembly Hall. As I was getting out, President Obama, I don’t know for what reason, was entering the General Assembly Hall, and we simply ran into each other. On and off the record, it was an accident.

Is this going to cost you at home?

It has already cost me at home. But everything I do costs me at home, so this is not an aberration.

Why was President Hassan Rouhani unwilling to see President Obama? White House officials made clear to me and others that they were interested in trying to make that work this time.

Because we believe that what is right now on our agenda is the implementation of this agreement, and that is the No. 1 priority. You don’t need to do things that would complicate that. What is important for us is the substance, not the appearances, and I mean photo ops.

For eighteen months, you’ve been telling me about your four-point plan for Syria. Where does that stand?

It has evolved, but it still has four points. The gist of it, however, is a national-unity government, a ceasefire, fighting terrorism, constitutional reform, and creation of a permanent government structure based on the new constitutional institutions that have been created. This is basically the gist of any plan that we believe would be workable in Syria.

Of course, any plan should also have a number of principles that everybody should subscribe to, with respect to sovereignty, territorial integrity, fighting extremism, sectarianism, and non-interference in the internal affairs of Syria, a political solution, respect for minority rights, human rights. We are just making suggestions. We are not making any rigid proposal. We are in the process of talking, consulting with various regional and extraregional players on this.

How wedded to President Assad is Iran?

What we have been saying from the beginning is that this is a decision that the Syrian people have to make. We are against people and governments outside Syria setting preconditions for a political solution in Syria. One way or another, we’re not setting any preconditions. We believe that’s not our job. We believe we should leave it to the Syrians to decide. We should facilitate national unity, national reconciliation among Syrians, and then should facilitate an outcome that is stable and democratic, and then allow Syrians to make their own decisions about who should govern them, and how they should be governed.

Is the United States aware of this plan?

The United States is regularly briefed by its European allies, as well as by the United Nations, and all of them have been privy to our thinking.

Do the Russians support your idea?

I believe our thinking on that situation is very similar.

The Russian bombings of Syria—were you taken by surprise when they started?

What do the Russians ultimately want out of this bombing campaign?

What the United States should have wanted from this bombing campaign—and that is to destroy Daesh.

But is it also to insure that President Assad survives, or is it to facilitate a process? I’ve been wondering whether the new movement is actually getting us closer to negotiations, or whether it’s dividing the countries, the major powers, even more.

Why are you confident that the Russians are interested in negotiations rather than simply insuring that Assad stays in power?

Russia’s first target was not ISIS or the al-Nusra Front.

It was. The first target was the new group that has been created out of the combination of al-Nusra and Ahrar al-Sham, called Jaish al-Fatah. These groups get new names every other day.

In terms of Iran’s presence, there were reports in the past week of Iranian troops in Syria, not just military advisers.

Wrong. We haven’t changed the nature of our presence in Syria. It continues to be military advisers, and no more. Actually, I checked, and I made sure that this was the case.

We support anybody’s involvement against Daesh, provided that it’s serious. The problem with the international coalition was that it was never serious, because it had political inhibitions against hitting Daesh, because they believe that hitting Daesh before they have a solution for Bashar al-Assad would help Bashar. So there is just a show going on, and that is why the ability of Daesh has not even been dented over the past year.

How does this play out? We have an unprecedented number of countries engaged in Syria militarily now. How do we get from this moment to negotiations?

As soon as you get ready to talk about the future of Syria without preconditions. That requires a major, major soul-searching on the part of the West. Their predictions were wrong. They were expecting to unseat Assad four Ramadans ago. Instead of three weeks, it has been four years and hundreds of thousands of casualties and millions of people displaced from their homes.

At the United Nations, President Obama talked about a managed transition, which is a term that he used for the first time. Did you see any flexibility in that—in the U.S. looking more actively for a negotiated outcome?

There are new nuances. You see remnants of his old rhetoric.

I still believe that there are some considerations of regional constituencies that disable the United States from divorcing itself from the old policies that have continued, have caused the continuation of this conflict.

Its alliances with Saudi Arabia and other Gulf countries?

Yes, its attention to their anxieties.

Has the nuclear deal opened the way for broader discussion of Syria, of Yemen, of Iraq, of the other regional flashpoints, in ways not possible before?

Not yet. We were hoping that the implementation of the JCPOA [Joint Comprehensive Plan of Action] would start reducing some of the mistrust that existed in Iran about the objectives and general policy directions of the United States in the region. Obviously, the comments that we’ve heard over the past two months, which were mostly addressed to the domestic constituencies here in the United States, did not help to alleviate the mistrust.

Do you really have any doubt that, given the fact that this has now gone through the congressional hurdles, there’s any real obstacle to its implementation?

There are two ways that you implement an agreement. One way is the minimalist approach to implementation—you will do absolutely what is unavoidable—and that is not conducive to producing confidence. The other way of doing that would be to look at sanctions terminations as an insurance policy, to create a different type of interaction with Iran. The United States should look at this not as concessions but as a way to insure the longevity of a very good agreement. And, if they did that, then not only would we have a sustainable agreement but we would build confidence.

But haven’t the United States and Iran turned a page by simply coming to terms on a nuclear agreement?

The jury is still out. I’m certainly hopeful I didn’t waste two years of my life for nothing! And I’m sure Secretary Kerry has the same hope.

What would be next on the U.S.-Iran agenda?

I’ll take one step at a time. But I’ll take firm steps. And you saw that that works. We took a firm step; we did not confuse the nuclear issue with other issues. People were talking, were saying we had to mix other issues. We stayed on message, as you say in campaigns, and we were able to crack this very difficult issue. If we stay on the same line and continue good-faith implementation of JCPOA, then we have a possibility to create some confidence that would enable us to deal with other issues.

And take other firm steps?

And take other firm steps.

One step at a time.