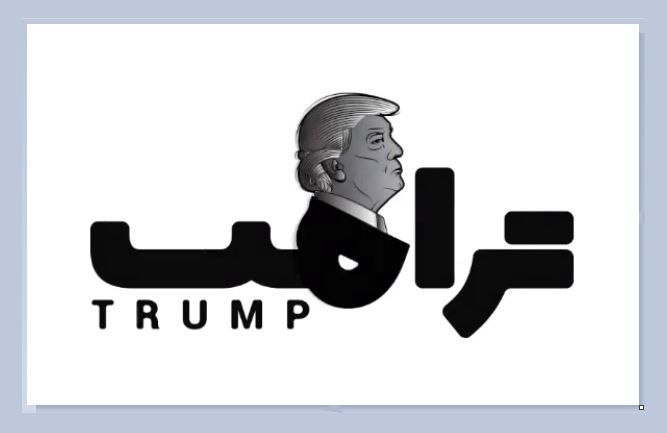 The exhibit showcases the works of eight artists themed on “Donald Trump” in the form of digital art.

A non-fungible token is a unit of data stored on a digital ledger, called a blockchain, that certifies a digital asset to be unique and therefore not reproducible or interchangeable.

Although it is customary to use NFTs in different domains, it has specifically become popular in the domain of digital art and collections.

In recent years, the works of some renowned artists have been sold at high prices, setting marvelous records among the most expensive NFTs.

Moreover, there are companies which turn artistic masterpieces to NFTs.

These digital works, which are reproduced with the same size as the original work, are unique and theft-proof and have made their way into digital collections.

In Iran, too, a number of artists who use digital tools to create works of art have sometimes reproduced works in the form of NFTs some of which have been offered on foreign websites.

Nevertheless, there had been no opportunity to introduce and display these types of work in Iran before.

Now that the coronavirus pandemic has forced people to stay away from public places and become all the more dependent on the Internet and digital gadgets, the Dena Art Gallery has set up an exhibition in cooperation with a group of artists to showcase digital works of art on the NFT platform.

“There is almost no one in the world who does know Donald Trump. From our standpoint, he, who was the United States’ 45th president, is the result of a kind of human thinking and the outcome of a form of democracy which are capable of creating such a phenomenon when combined with social media,” read the exhibition’s statement.

Artists attending the exhibit have looked at Trump’s character from different perspectives through a whole range of works of art.

One of the artists shows the front page of a newspaper which illustrates a caricature of Trump with stains of colour being splashed on it.

This work of art focuses on Trump’s insulting and racist tweets and highlights people’s demands that he be removed.

Another work named “Trump’s Dead End” depicts images of the Statue of Liberty in New York as well as the Azadi Tower in Tehran, highlighting the dashing of hopes of expansion of Iran’s international relations during the Trump era.

Another work illustrates the image of Trump with a clown’s make-up, highlighting his anti-social character and his intense superiority and despotism mentality.

There is work of art showing notes of music illustrating Trump’s date of birth.

Another work aggrandizes Trump’s yellow hair and red tie, which suggest showing off his power.

This work of art highlights that Trump did not initiate a conflict, but launched major economic wars against other countries, including Iran.