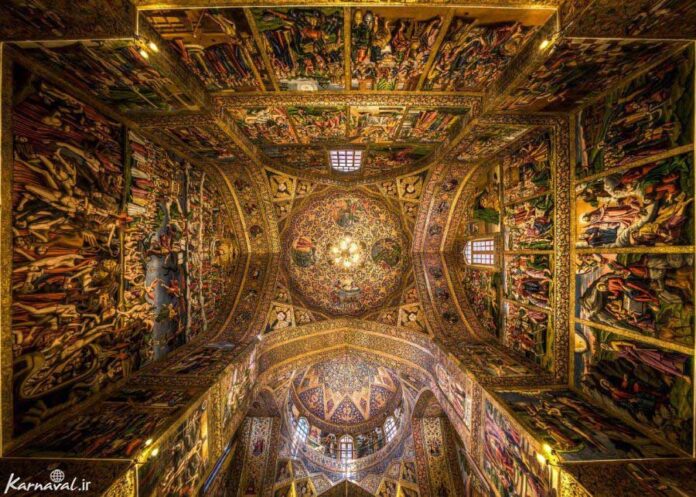 This legendary Vank Church in the Iranian city of Isfahan is also known as “Holy Saviour Cathedral and Church of the Saintly Sisters”.

Vank means “monastery or covenant” in the Armenian language. This famous tourist site is located in the New Julfa district of Isfahan, Iran. The church was established in 1606 dedicated to hundreds of thousands of Armenian refugees. The refugees were relocated by, Shah Abbas I, during the Ottoman war 1603-1618.

It is interesting to note that the fortunes and independence of the suburb across the Zayandeh River (Zayanderud) and eclectic missionaries and mercenaries historically living in the area can almost be chronologically traced to the cathedral’s combination of building styles and differences in its architectural designs through the hundreds of years. So, as the cathedral prospered the surrounding neighbourhoods would prosper.

The cathedral was believed to be constructed in 1606, by the original Armenian refugees. This cathedral underwent major structural changes from 1655 to 1664 under the supervision of Archbishop David. The church consists of a domed sanctuary which resembles a typical Iranian mosque but there is one major difference. The cathedral has a significant addition semi-octagonal apse (a large semicircular or polygonal recess in a church, arched or with a domed roof, typically at the eastern end, and usually containing the altar), and a raised chancel commonly seen in western churches. The outward design is simple in contrast to the intricate and beautifully designed interior.

The church has corridors of successive arches which is a common feature of Islamic architecture. These arches lead into a brightly-coloured room of Armenian and Christian iconography (collection of illustrations and portraits) along with standard Islamic geometrical designs. Surprisingly, the church which is Christian has existed in an Islamic country without any incidents having occurred within its parameters all these years. The church contains detail and depth of color rarely found in religious structures.

The community is allowed to live in peace and freely express it religious beliefs in Iran. Within the cathedral complex is a museum that chronicles the Armenian genocide committed by the Turks in the early part of the 20th century. You will find many breathtaking architectural sites in this Iranian city, but the Vank Cathedral will stand out as the one of the most beautiful tourist sites in the world. 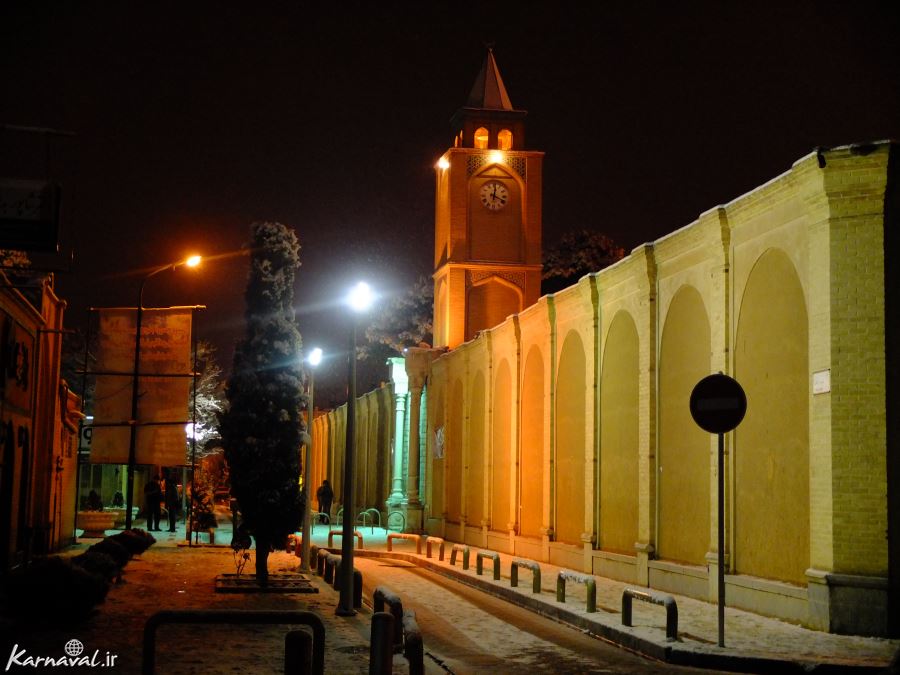 A Belgium tourist says, one will be amazed that a Christian church exists in Iran, and it one of the oldest and most beautiful churches in the world. It is awesome that it can exist in a heavily influenced Islamic country.

An Iranian native said, this is a must see site if you visit Iran, it helps one to understand the construction of the city and it is a notable piece of Armenian history. It is a beautiful piece of art and it has a one-of-a-kind museum.

An Australian visitor claimed, that the church is located in the Armenian quarter of the city, next door to an Armenian museum.  The Church is small for a cathedral but it offers some very beautiful art work. If one ends their experience by visiting the museum, it clarifies the Armenian migration to Iran for that visitor.

A New Zealand tourist said this, the church is a wonderful, unforgettable place to visit. The church illustrates bible stories and the awful deaths of the Armenian saints on the walls. The museum further explains, in detail, the persecution the Armenians suffered at the hands of the Turks.

A visitor from Tehran complained, that the church was nothing extraordinary to visit and this visitor did not appreciate the entrance fee the church charged visitors.

A London traveler suggests, that the museum is very uninspiring but the settings and art work in the church are nice. The coffee shops are funky and you can take a nice stroll along the river. The last part of the review really having nothing to do with the cathedral.

It is disheartening to note the above review suggests that the museum is uninspiring. There were many Armenian lives lost in the early 20th century, which should inspire anyone to stand up for what they believe.

This celebration occurred on Monday, October 20th, 2014 in Isfahan, Iran. It marked a monumental point in the history of Vank Cathedral as it marked the 350th anniversary of this legendary cathedral. Think about it a Christian church has peacefully existed in Iran for 350 years which is quite an achievement.  The ceremony was attended by Armenian Church Leader His Holiness Aram I, and the Archbishop of Isfahan province and southern parts of Iran, Babken Charian, and a group of Isfahan’s Armenian residents and officials attended the ceremony as well. In the ceremony, Archbishop Charian cited prayers of lament and the brethren shared in holy bread.

Following the Ottoman war of 1603-1605, there was a major migration of Turks into Iran. Their leader was Safavid King Shah Abbas I, who settled tens of thousands of them in the Iranian provinces south of Aras River. King Shas Abbas I also settled thousands of Armenians who fled the Ottoman massacre in Nakhchivan to Iran. This migration actually set the impetus for the great cathedral to be built. This guaranteed their style of worship would continue from generation to generation.

Nakhchivan suffered immensely during the 14th to 18th century wars between Persia and Ottoman Empire. These bitter enemies fought for 400 years and Nakhchivan was right in the middle of the bloody conflict. King Abbas, feared the lands around Nakchivan may fall into Ottomsan hands; he forced the entire Muslim, Jewish and Armenian population of the city to move to Iran. The refugees relocated to Isfahan, the capital of the Safavid Dynasty, and settled in the city’s New Jolfa district, named after their original homeland in modern Azerbaijan Republic.

The Armenian immigrants began building churches and monasteries to continue their religious practices. The first monastery built in 1606 was in Jolfa. The structure included a little church, Amna Perkich, which means “’All Healing.” From these humble beginnings, the magnificent Vank Cathedral was built. The cathedral was built 50 years after the little church was first built.

Shah Abbas I, also known as Abbas the Great, passed away on January 19, 1629 in Farahabad, Mazandaran, Iran at the age of 57.

One of the largest and most beautiful churches in Iran was completed in 1664. In 1702, a bell-tower was added, a printing press founded by Bishop Khachatoor, a library built in 1882, and finally a museum in 1905. 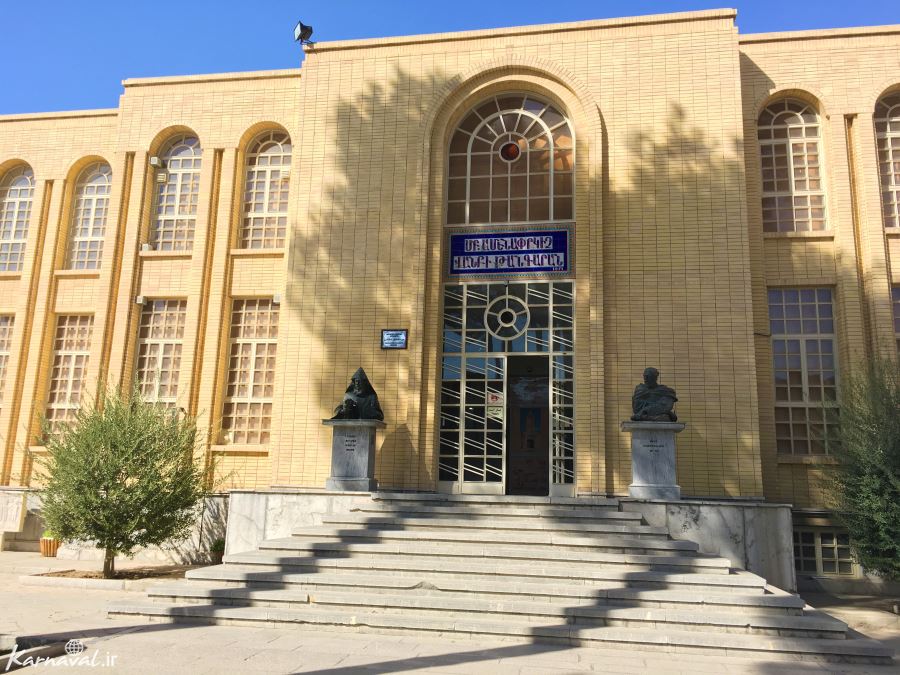 The Characteristics of the Cathedral

The grand entrance to the cathedral consists of a large wooden gate through which visitors enter the courtyard of the building. Upon entering the courtyard, one encounters two rooms that once comprised the administrative offices where the Armenians processed their paperwork. One is confronted with a large free-standing belfry—the part of the bell tower where the bells are housed—that stands in the courtyard. The belfry towers over the graves of Orthodox and Protestant Christians who have been buried along the wall before the entrance. The Belfry was built 38 years after the main structure and the belfry leads into the main entrance.

If one looks to the right-side of the belfry they will see a large blue inscription surrounded by crucifix stones. The stones have been collected from the ruined churches of the Jolfa quarter. On a raised area to the left, there has been a memorial set-up to remember the victims of the Ottoman massacre. On every year April 23 Armenians gather by the memorial to light candles in remembrance of these martyrs.

At a corner of the cathedral’s courtyard, rooms have been built to house the Isfahan archbishop and his group, as well as other Armenian religious authorities of Iran. There is a building across the courtyard facing the cathedral. This building houses the Vank library and museum.

The Vank Cathedral is one of the biggest sight-seeing tourist attractions in Iran. It has become a well-known wonder worldwide. It has a long and illustrious history. It was founded by Armenian religious refugees in 1606 when the construction of the cathedral started. Throughout the centuries there were additions added to the original structure through 1905.

The church commemorates the martyrs killed in the great Ottoman slaughter. The church has peacefully existed in the heart of Iran for over 350 years. Many visitors have visited the cathedral being inspired by its inward beauty. Visitors have come from all over the world to visit this magnificent site.