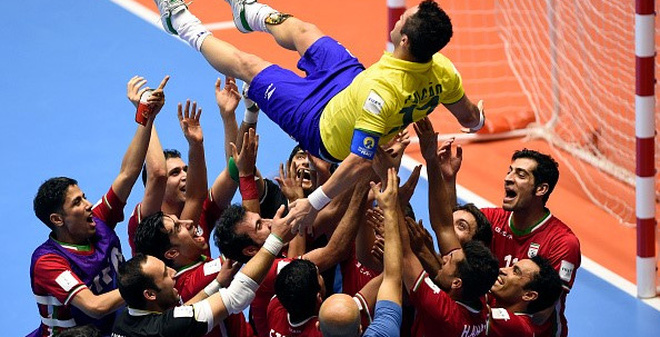 Iran National Futsal Team defeated the giant Brazil in FIFA Futsal World Cup, but they didn’t go to the locker room to celebrate their victory; they stayed to throw the retiring Brazilian legend in the air.

The Brazilian futsal player Falcão retired after breaking the all-time goal-scoring record during the ongoing FIFA Futsal World Cup 2016 in Columbia; however, the last match of his life brought tears to his eyes as they were surprisingly defeated by Iran.

Iran’s national futsal team booked their spot in the quarterfinals of the 2016 FIFA Futsal World Cup in Colombia. They beat Brazil 3-2 on penalties in an action packed match that will sure be remembered for a long time.

The Asian powerhouse showed a flawless performance on Wednesday and worked hard to overcome the 5-time world champions in the round of 16 of the tournament. On Thursday, Falcão managed to put the Brazilians ahead after 8 minutes.

Then he doubled the lead for his side some 4 minutes later, making it 2-0. But, Iran team soon found their rhythm and pulled one back, through Tayyebi.

Brazil restored their 2 goal advantage after half-time and made things harder for Iran. But, the Iranians didn’t give up and went on to add 2 goals to tie the match at 3-apiece through Kazemi and Hassanzadeh, Press TV reported.

That forced the match into extra time. Both sides scored a goal each in additional time. They locked the game again at 4-4, sending the match into penalty shootout. That’s where Iran took their chances better to win the match 3-2 and progress into the last 8. 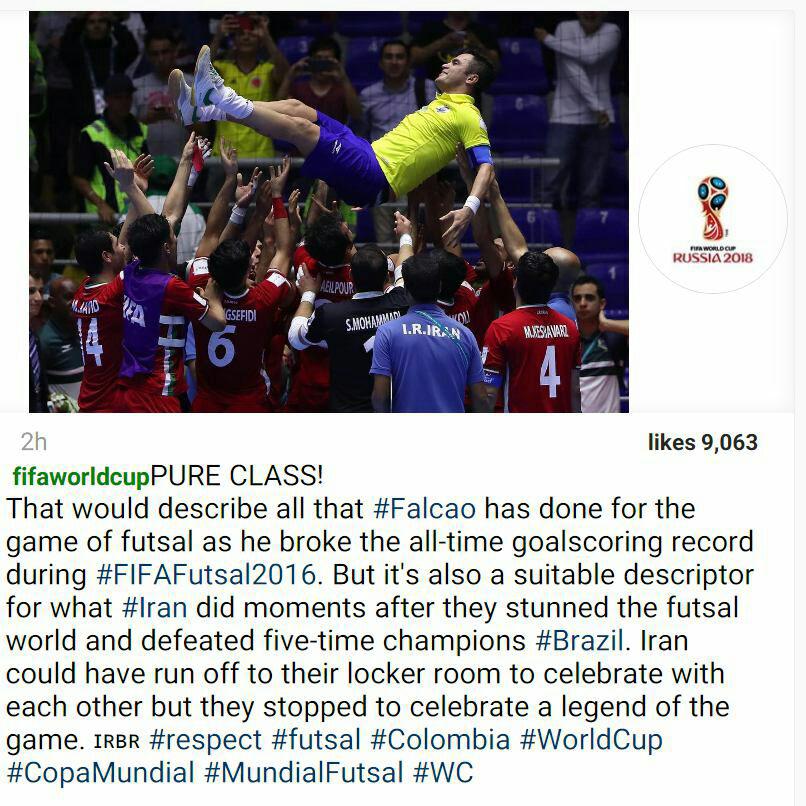 According to the FIFA’s official Instagram account, “Iran could have run off to their locker room to celebrate with each other but they stopped to celebrate a legend of the game.”

There was a touching moment to follow, as Iran paid their tribute to the retiring Falcão, celebrating his career and lifting him before the crowd.

“That would describe all that Falcão has done for the game of futsal as he broke the all-time goal-scoring record during FIFA Futsal 2016. But it’s also a suitable descriptor for what Iran did moments after they stunned the futsal world and defeated five-time champions Brazil. Iran could have run off to their locker room to celebrate with each other but they stopped to celebrate a legend of the game.”

“We were happy that we had won the game, but we were also disappointed to see Falcão crying and to say goodbye to the game in that fashion,” Iran’s Ali Hassan Zadeh said on bringing Falcão’s career to an end.

“So everybody decided spontaneously to share the happiness with Falcão and it shows the true spirit of Iranian sport and athletes, as we wanted to share that moment with the loser of the game as winners.”