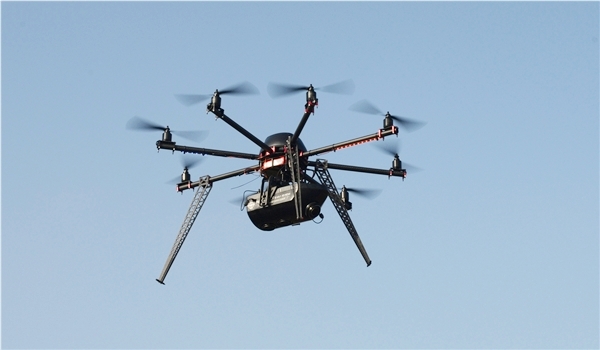 The Iranian-built drone doesn’t need any runway for taking off and landing, and can continue flight even after one of its engines is damaged.

Iranian inventors at Sharif University of Technology designed and built a vertical take-off and landing (VTOL) drone capable of flying automatically in different environments even out of the pilot’s sight.

Hodhod [Hoopoe] 3 Drone, which was put on display at a Tehran exhibition, is capable of flying 53 minutes and can carry some loads.

The VTOL drone doesn’t need any runway for taking off and landing, and can continue flight even after one of its engines is damaged.

It can also be used for simultaneously sending information to the command center, returning home in emergency situations, and automatically taking off and landing out of the pilot’s sight.

In recent years, Iran has made great achievements in its defense sector and secured self-sufficiency in producing essential military equipment and systems, including UAVs.

In 2013, an Iranian inventor designed and built a VTOL drone using combined fuel which he said was highly functional for military operations.

“The vertical Unmanned Aerial Vehicle (UAV) which uses combined fuel and has a big propeller and two side rotors can fly vertically for 2 hours,” Iranian inventor Jafar Aghazadeh said.

He added that the drone, which is under flight test, is especially good for military missions and uses a fuel cell and a hydrogen generator system as its power source.