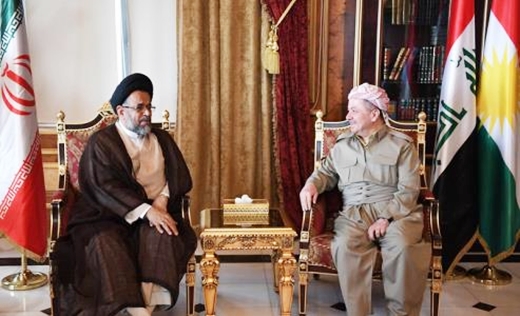 Iranian Intelligence Minister, Mahmoud Alavi, met Kurdistan Region President, Massoud Barzani, in Erbil, the capital of the Kurdish region, on Sunday May 15. He reiterated Tehran’s support for the autonomous region in the north of Iraq.

Alavi promised his country’s support for Kurdistan Region to continue in the future, BasNews reported. Barzani, for his part, stated that further serious international cooperation and collaboration is required to defeat ISIS.

He reasserted that completely defeating ISIS in Iraq and Syria needs the international community to combat terrorist ideologies and financial resources.

The pair also discussed relations between Erbil and Tehran, the long-promised liberation of Mosul, as well as Erbil-Baghdad disputes.

The Iranian official had arrived in Baghdad earlier this week and met with a number of senior Iraqi officials before visiting Erbil.