Iranian Man Turns into Painter in his Eighties 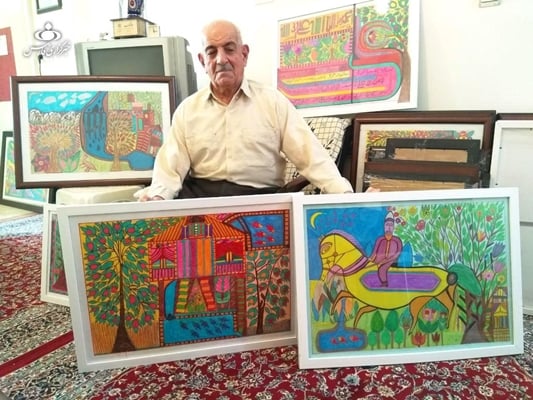 Hassan Moradi, at the age of 84, has become one of the most famous painters in Iran whose works of art are put on display once a week at the best galleries of Tehran.

Every day, the fans of this Iranian octogenarian artist in different countries are waiting for his new works every day.

When he was 2 years old, he lost his mother, and her father died later to make him a homeless orphan.  He started working at the age of 6 and at the same time began his self-studies. Then, he began his job at a bakery. However, the strangest thing in his life happened at the age of 80 which suddenly took him to the galleries.

Moradi is not educated enough and has learned reading, writing, smithery, painting, etc. on his own. 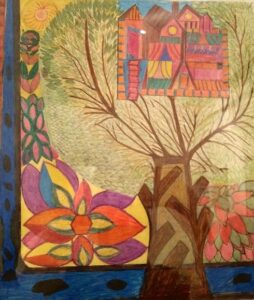 “In my eighties, I feel like a young man. Every person lives with his wishes and will. Therefore, having problems in life is meaningless. This is what I say; a man who has always lived in poverty and loneliness,” he says.

What follows is part of his interview with Fars News Agency:

Once, I took the sheep for grazing and I found a piece of paper on which there were some sentences in English.  At that moment, a young woman who was accompanied by a girl asked me, “Can you read?”

I did not know what to say. I said no. Then she asked me “Do you want to learn reading and writing?”

I said “Yes.” She took me to her home and gave me a notebook and a pencil and I began to write. I kept practicing secretly as I did not want anybody to know about this.

Finally, the man I was working for as a shepherd torn up my notebook. I escaped from there and started working in the market. As I grew older, I worked at a cafe and then I came to work at a bakery. In that bakery, I became friends with a student who taught me math. 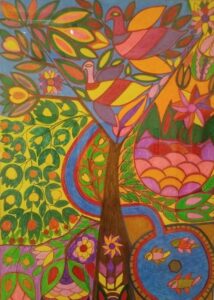 At that time, I had a book in my pocket, and I asked the meaning of words on bus, in taxis, etc. I kept doing this till I learned reading and writing. Gradually, I learned poetry and literature and became a representative of the bakery workers. I was the representative of more than 4000 workers.  There was a lot of opposition to the workers’ insurance, but I did not miss a moment and finally I could provide them with insurance. I launched workers’ protests until SAVAK arrested me. After a few weeks, they released us, but I did not keep quiet. I kept protesting till the officials were forced to provide insurance for the workers.

After that I decided to learn smithery. I made my decision and became a blacksmith.

When my wife died, I felt very isolated. Then, I had an accident and had my pelvis broken. I was hospitalised for about a year. My blood sugar rose too much, and they could not perfom an operation on my pelvis.

I did not want to be in that situation anymore. For the first time in my life I felt down. I asked God to help me. The other night I dreamt of Hazrat Fatima (SA). That was a miracle. The next day, my blood sugar dropped down and I asked my doctor to perform a surgery on my pelvis.  He agreed and after 2 months, I could walk.

After that dream, I began to paint spontaneously. The topic of my paintings is Ahl-ul-Bayt (AS). Almost every month they put on show my works in a gallery. Some of my friends at the exhibitions took my works to different countries. All my paintings are images that come to my mind all at once.