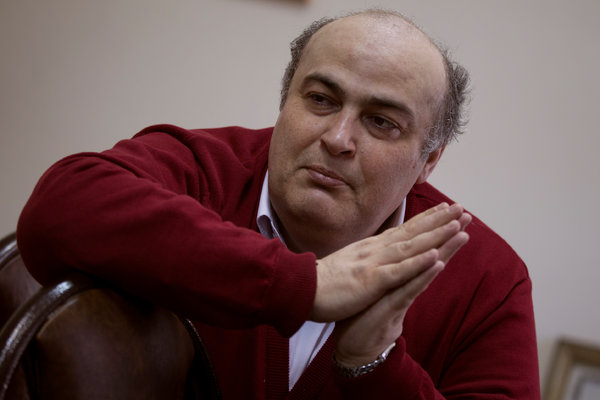 Siamak Moreh Sedgh, the representative of Jewish people in Iran’s Parliament, dismissed the allegations about his interview with an Israeli radio, saying that no free man interviews with a Zionist media.

According to a report by Asr-e Iran, as translated by IFP, Moreh Sedgh reacted to the recent rumours about his interview with Israeli radio. He denied the allegations and said, “In my recent trip to France, the correspondent of a French magazine raised a question about the possibility of an unexpected attack of the Zionist regime [Israel] on Iran.”

“I’m pretty sure that the Zionist regime is sane enough to comprehend that attacking Iran is tantamount to the annihilation of Israel,” Moreh Sedgh replied to the question.

His remarks came as Israeli media outlets such as The Times of Israel and Jerusalem Post claim that they have broadcasted his interview in English language. In the meantime, Jerusalem Post is said to have released even the full text of the interview.

“Iran is safer than France for the Jews to live in,” Moreh Sedgh stressed in the alleged interview.

He pointed to the fact that Jews can freely practice their religious rituals in Iran and said, “Throughout the history of this country, Jews have never been banned from any cities even the most religious ones.”

He believes that, especially after the nuclear agreement between Iran and the P5+1 group of countries, there is no possibility of war between Iran and Israel. He said, “Iran will not start a war with Israel because they know that any country that starts a war in the Middle East has actually committed a suicide.”

He noted that he was suspicious about Benjamin Netanyahu’s sanity two or three years ago that he was crazy enough to desire a war.

“In the current situation and after the landmark deal there is a more stable situation in the Middle East and the possibility of war between Iran and Israel has been ruled out,” he added.

Moreh Sedgh pointed to the religious freedom of Jews in Iran and said, “In this country we have our own synagogues, schools, butchers and restaurants.”

“The highest rank that Jews can possess in Iran is a member of Parliament,” he said, adding that, “From among the 25,000 Jews in Iran, one can become a parliamentarian. One seat has been allotted to Jews.”

He described the living conditions for Jews very good in Iran and said, “Jews can reach high echelons of academic and teach in universities.”

Moreh Sedgh stressed that living in Iran is much safer than living in a country such as France where security guards have been deployed in synagogues for the fear of possible attacks on Jews.

“Hostile relations between Iran and Israel has not influenced the living conditions of Jews in Iran,” he said, arguing that, “to Iranian government, Zionism and Judaism are not similar.”

About the legal difficulties that religious minorities such as Jews are facing in Iran, Moreh Sedgh said, “Things are getting ameliorated, for example, with the fatwa of the Leader of the Islamic Revolution Ayatollah Seyyed Ali Khamenei the difference between the Diah (blood money) of Muslims and non-Muslims was resolved in the Iranian judicial system.

He referred to the controversial subject of Holocaust and said, “It is a historical fact and denying it is like denying the existence of sun.”

“During the presidency of Mahmoud Ahmadinejad, we expressed our criticism against his denial of Holocaust,” Moreh Sedgh said, adding that, “we even wrote him a letter and emphasized that his position against Holocaust is unacceptable to Jews and in conflict with the interests of the Iranian people.”