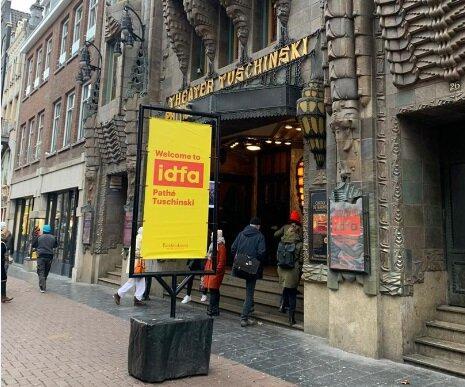 Known as the world’s major festival of documentary films, IDFA 2019 got underway in the Netherlands on November 20.

A documentary directed by Iranian filmmaker Mehrdad Oskouei, entitled “Sunless Shadows”, premiered in the opening of the festival, appearing as a great success for Iran’s motion picture industry.

After being screened for an audience of 1,300 media activists and critics at the opening of the festival, the Iranian film came under the spotlight and its director received high praise.

Sunless Shadows was rapidly put on the list of the top 10 movies after film journals and media mentioned the Iranian documentary and experts published criticisms of the film.

Tickets for the Iranian movie, screened in different sections of the festival, have sold out.

The Iranian documentary was screened for the public at Amsterdam’s “Pathe De Munt” movie theater on Sunday. The audience in the 560-seat theater warmly applauded the movie and attended a question-and-answer session with the director.

Several members of the audience who watched ‘Sunless Shadows’ were concerned about the fate of the girls who were serving their sentence in a juvenile detention center in the documentary, considering that one of the girls was announced to have committed suicide at the end of the film.

In comments at the conclusion of a Sunday screening of the movie, Oskouei said all of the girls appearing in the movie have been released from the juvenile detention center, three of them have gone to university, and none of the mothers have been executed for aiding and abetting the murder of the girls’ fathers or their husbands.

The other questions and comments in the session related to the mechanism of narration and storytelling in the ‘Sunless Shadows’.

“The guys appearing in the movie had such deep internal layers that in certain parts of the film, I realized that the film crew must leave the location, so that the guys could express their views more comfortably in front of the camera,” the director explained.

“Moreover, I became a transmitter of video messages between them and their mothers in the other prisons,” Oskouei added.

The next screening of Sunless Shadows will take place in Amsterdam’s Eye Cinema on Monday.

The documentary tells the story of a group of adolescent girls who serve their sentence at a juvenile detention center for the crime of murdering their father, their husband or another male family member.

Mehrdad Oskouei has built a remarkable relationship with the inmates by observing their frank conversations and playful interactions.

Occasionally, the director leaves the girls alone with the camera, allowing it to become a tool for them to address both their victims in the afterlife and their accomplices.